Henley Royal Regatta, now in its 176th year, starts today, Wednesday 1 July, and runs until the end of finals day on Sunday, 5 July. There are 526 crews entered (32 more than last year) and 18 countries are represented including national crews from Britain, Germany, Canada, the U.S. and Australia. On the day before the action started, I was in Henley to check that the course was straight and that the Stewards had remembered to put everything in place that is required to run the world’s most famous regatta. I am pleased to report that all seems set for what can already be fairly safely regarded as a ‘classic Henley’ and one in which records will be broken. One record may be the temperature, with predictions of 30°C / 86°F for the first day. It is widely anticipated that permission will be given for gentlemen’s jackets to be removed in the Stewards’ Enclosure, something that has happened only three times in the last 39 years (though Hear The Boat Sing keeps its jacket on – in the traditions of those who ruled India whilst wearing Harris Tweed underwear). A press release from the Regatta said this about its top events:

The 2015 Henley Royal Regatta could see a clash of the reigning World and Olympic Champions if both Great Britain and Germany reach the final of The Grand Challenge Cup for men’s eights. Germany, also the reigning European Champions, took the Olympic title in 2012 but the British have won the last two World titles in the sport’s Blue Riband event. GB will race as Leander Club and Molesey Boat Club and Germany will be represented by Hansa von 1898 e.V. Dortmund. The equivalent women’s event could see the Canadian World silver medallists take on an in-form GB eight.

Henley will also witness attempts by both the reigning Olympic Champions to add a fifth title apiece in the single sculls events for men and women – The Diamond Challenge Sculls and The Princess Royal Challenge Cup – as both New Zealander Mahe Drysdale and the Czech Republic’s Mirka Knapkova are on the entry list. Knapkova won in 2010, 2011, 2013 and 2014. Drysdale’s wins came in 2006, 2009, 2010 and 2014.

I would emphasise the entry of the great University of Washington ‘Huskies’ in the Ladies’, the Prince Albert and the Visitors’. The Huskies won their fifth consecutive IRA national championship earlier this month and it will be the 13th Henley appearance in their history. A big all-American clash in the intermediate men’s eights emerged from the draw. Washington will race Princeton University in the opening heats. A record number of 59 American crews have entered the Regatta which is 11 more than the previous record.

Greg Denieffe would want me to mention that Sean Drea, 68, one of the top Irish sportsmen of the 1970s, will be honoured with a row over on Saturday. He won the Diamond Sculls in 1973, ’74 and ’75, the year he also took a silver medal at the World Championships. 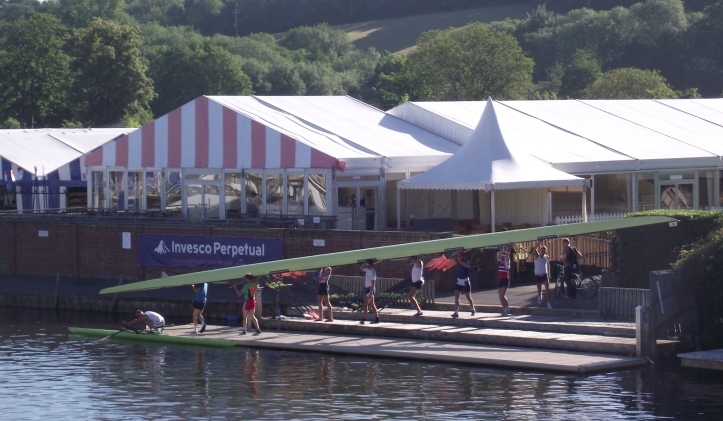 Tom Morgan of Row360 magazine has a splendid preview of Henley 2015 here  and Daniel Spring (aka ‘Fatsculler’) has fantastically detailed previews and very bold predictions on his blog, read it here.

The Regatta will adjust its schedule to delay the planned 12 noon race on Friday so that rowers, spectators and all other Regatta personnel can observe the nationwide minute’s silence called by the Prime Minister in respect of those who lost their lives in the recent events in Tunisia.

For the first time since 1967, the Regatta will be broadcast live. New Chairman Sir Steve Redgrave has inherited and developed this project from immediate past Chairman Mike Sweeney. Every race will feature live across all five days from 1-5 July on YouTube, with daily highlights, and the BBC will cover the event on the Red Button and website on finals day.

*A headline traditionally used by the British popular press when there is a heatwave, though it is now most commonly written knowingly as a self-parody.