“Blood Sweeps Land and Seas of Red”: The Completed Project 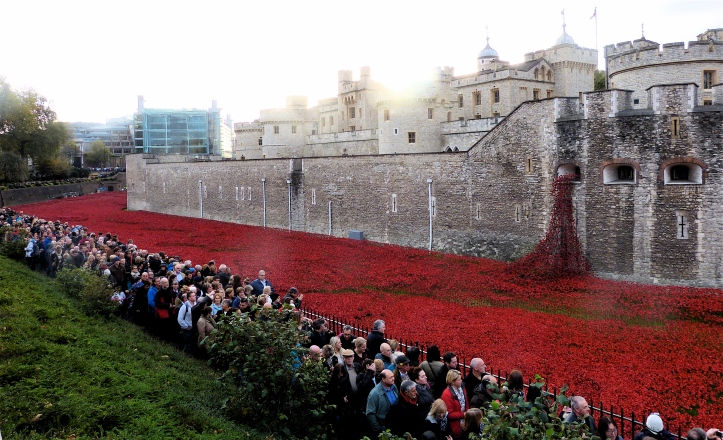 Under the title, ‘Nothing To Do With Rowing’, on 6 October, I reported on the remarkable installation at the Tower of London that commemorates the British dead of the 1914 – 18 War. “Blood Sweeps Land and Seas of Red” was created by ceramic artist Paul Cummins and stage designer Tom Piper, and it consists of 888,246 ceramic poppies which have progressively filled the Tower’s (dry) moat over the summer. Each poppy represents a British military fatality during the Great War. The display has captured the public’s imagination and four million people have queued to see it. I took these pictures at 8am on 8 November, the day before Remembrance Sunday, and the Tower was already surrounded by people standing four deep. Its ‘success’ (if that is not an inappropriate word) probably lies in the fact that we cannot imagine nearly 900,000 deaths but this visual representation starts to give us some concept of the scale of the carnage. For those of us who are aware of an ancestor that was killed in that War, the knowledge that they are represented by one of the poppies adds to the poignancy. For me, one poppy commemorates my great-grandfather, Thomas Davies.