There are three things that you do not necessarily expect on a Henley first day: some exciting racing, large crowds and above average temperatures. However, the Wednesday’s opening day provided all three. I will leave others to write more about this as I prefer to spend my time by the riverbank rather than at my computer. Also, Rachel Quarrell, writing in Wednesday’s Telegraph, does it much better than I ever could. If you are interested in weather related pictures of Henley, inter-cut with pictures of girls in bikinis, the nominally puritanical Daily Mail is for you. The full details are on the Henley Royal Regatta website (click on the event name for the stats and remember that some of the top events do not start until later in the week). 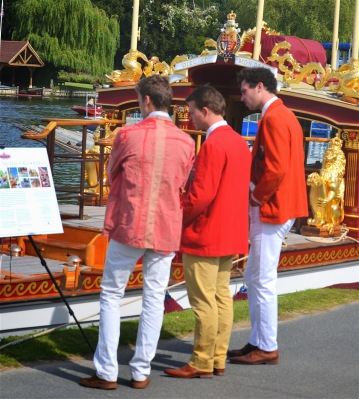 Members of Oxford Brooks University ‘B’ find that losing is not as good as winning. They were beaten by University of Michigan, USA, in a heat of the Temple Challenge Cup (Men’s Student Eights).

My day was spent in the delightful company of some very special guests, all linked by a common theme. I had invited John Beresford (son of Jack Beresford, Britain’s most successful oarsman in the pre-Redgrave era) and Sue and Molly Bushnell (daughter and grand-daughter of the indomitable Bert Bushnell) as my guests. When we met up later in the day with Tizzy Burnell, daughter of the former ‘Grand Old Man’ of British rowing, Richard ‘Dickie’ Burnell, we had a gathering of the ‘Children of 1948’. ‘Bert and Dickie’, coached by Jack, were, of course, the unlikely pairing who won the double sculls at the 1948 London Olympics, an event recently dramatised in a BBC television programme. As regular readers will remember, this production was extensively covered by ‘Hear The Boat Sing’. This meeting was made even more special through the generosity of the Chairman of Henley Royal Regatta, Mike Sweeney, who arranged for us to follow two races in the umpires’ launches and allowed us access to the hallowed Committee Lawn, an area for the Stewards and their guests. It was a gesture very much in the traditions of Henley and was much appreciated by all concerned. Here are some pictures of a memorable day. 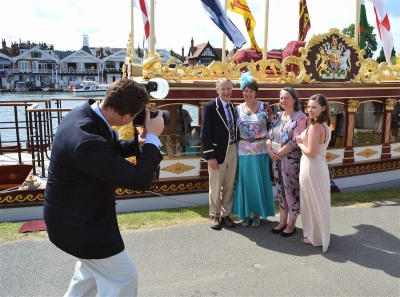 Members of Rowing Royal Families pictured, appropriately, in front of the Royal Rowbarge, Gloriana. The press picked up on the story and they were interviewed and photographed by the Henley Standard newspaper (read article here). From left to right, John Beresford, Tizzy Burnell, Sue Bushnell and Molly Bushnell.

Pimm’s on the Committee Lawn. It does not get more civilised than this, John, Sue and Molly. 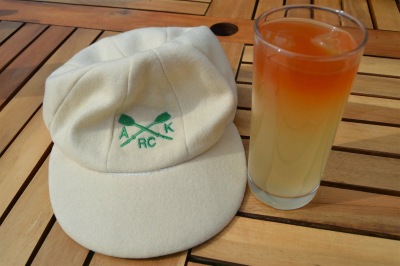 Tizzy Burnell introduced us to the ‘Bengal Tiger’, a non-alcoholic cocktail invented by her Grandfather, Charles ‘Don’ Burnell, who won in the eight at the 1908 Olympics (Don and Dickie are the only father and son in Olympic history to have won gold medals in rowing). When Don was umpiring at Henley he felt that he could not drink wines or spirits at lunchtime (something that, in the past, some of his colleagues were not so strict about) and so produced this drink which feels as if it has alcohol in it. It is a mixture of ginger beer, lime juice and Angostura Bitters. If you are not umpiring, you can add vodka. 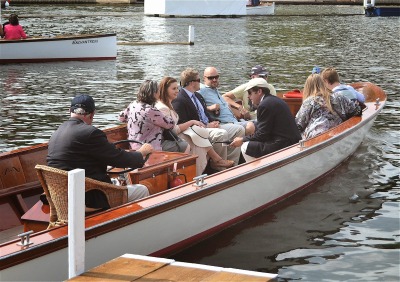 Sue and Molly followed the race between Cambois and Nottingham in a heat of the Wyfold Challenge Cup (Club Coxless Fours).

John and I followed the race between the University of the West of England (UWE) and Goldie Boat Club in a heat of the Prince Albert Challenge Cup (Men’s Student Coxed Fours). It was a convincing and no doubt enormously satisfying win by the unfashionable UWE over the crew from the more prestigious Cambridge University Boat Club.