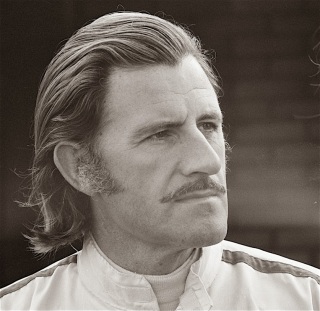 Veteran British readers and anyone interested in motor sport will know of the English racing driver, Graham Hill (1929-1975). He was one of those sportsmen who were held in great affection long after their career ended, not only by fans of the sport in question but also by ‘the general public’. In the days (not so long ago) when Britain was a more deferential country, this widespread affection was gained not so much by simple sporting success – it was most assured if the athlete in question was thought of as ‘a gentleman’ who seemed to win ‘effortlessly’. It was popularly supposed that Hill was such a man. When his perceived wit, charm, charisma and his reputation as a ladies’ man par excellence was added to the mix, the legend was assured. It was a legend that rowing can take some credit for.

I have no real knowledge of motor racing and consequently am reliant on the writings of those who do claim to know something of it. There seems to be some sort of consensus among such people that Hill was not the most naturally talented of drivers but he achieved a genuinely unique success by force of will, hard work and an attention to detail. There were certainly no ‘effortless’ wins, whatever the public may have thought, but the fact is that Graham Hill is the only man to have achieved the ‘Triple Crown’ of Motorsport. The original definition is that the Crown’ is made up of the Indianapolis 500 (won by Hill in 1966), the 24 Hours of Le Mans (won in 1972) and the Monaco Grand Prix (won in 1963, 1964, 1965, 1968 and 1969, hence the ‘King of Monaco’ epithet). A newer definition replaces Monaco with the Formula One World Championship but, as Hill won this in 1962 and 1968, he is still the only man to achieve the Triple, however defined.

The internet has many affectionate (though rarely totally uncritical) takes on the man, his sport and his life.

Graham Hill’s iron-willed determination, fierce pride and great courage enabled him to overcome the odds against more naturally gifted drivers. None of them was more popular with the public than the moustachioed extrovert with the quick wit, who loved the limelight, was a natural entertainer and became one of the first Formula One media stars. His fans remained loyal, even when he damaged his reputation by racing too long past his prime.

When Graham Hill became something of a hero for me around 1964, he already looked out of date. Despite the long hair and sideburns that later transformed him into a racing rock star as the Sixties progressed, his laconically courageous speaking style, refusal to take much beyond mechanics seriously, and appalling pencil moustache made him more of an archetypal Spitfire pilot than a racing driver.

Racing, in the 1950s and 1960s, was a different sport than the modern Formula 1. Drivers used to be more involved in…… the more messy tasks of the behind-the-scenes mechanics than the professional pilots of the modern circus. Often, drivers would drive their own cars to the track, towing their race cars on a trailer. Hill, like other stars of his time, was therefore much more than a pilot in the modern sense; he was also a mechanic, a technician, and a developer. As an ambassador of style, Hill was famous for his iconic sideburns with the pencil thin moustache and the sleek, combed back hairstyle. Even after a full race of 60 laps under a helmet, Hill’s haircut would be perfectly put together. He would combine his signature style with the fine sense of fashion inherent to an English gentleman.

Graham Hill was the face of motor racing in Britain in the 1960s – extrovert, fun-loving, dashing, rakish, moustachioed and handsome he was the public’s idea of what a racing driver should look like…….. he might have been a throwback to the 30s when chaps went racing for fun and could afford to spend large amounts of money on their hobby. Yet he had worked his way up from nothing….. he did not have enthusiastic parents who could dispense large amounts of money……. He was a late starter too: his first sporting love was rowing……. And rowing was to be an ever-present part of his motor racing career too – the familiar dark blue and white helmet which he always wore was based on the colours of the London Rowing Club – in his autobiography he remarked that he seemed only to excel at sports which allowed him to sit down while competing and that he could even do one of them facing the wrong way. 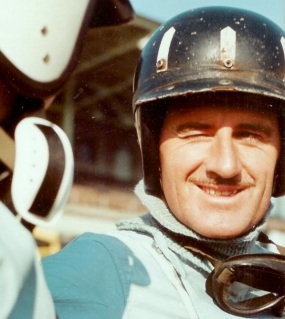 Hill’s entry into the world of competitive sport was through rowing. Some sources state that he started at London RC where he was an active member from 1952 to 1954. Some say that he first took up rowing at Southsea Rowing Club on the south coast of England while doing his National Service with the Royal Navy in Portsmouth from 1950 to 1952. The truth is that he was introduce to the sport at Auriol Rowing Club in Hammersmith, West London, by a cousin, John Ward. The club minute books record that his membership was approved at the committee meeting of 25 August 1949. The twenty year old must have been a quick learner as his first sporting success came nine months later when he rowed at ‘4’ in the crew that won Junior Eights at Hammersmith Amateur Regatta on 6 May 1950. His first taste of international competition came two weeks later when the crew raced ‘Junior International Eights’ at the 60th Terdonck Regatta, near Ghent in Belgium. It was a seven boat race which included crews from Belgium, Holland and France. Auriol led all the way but were beaten on the line by Antwerp Sculling Club who won by 1/5 of a second. Rowing also proved beneficial to an old leg injury that Hill had sustained in a motorbike accident some years before. 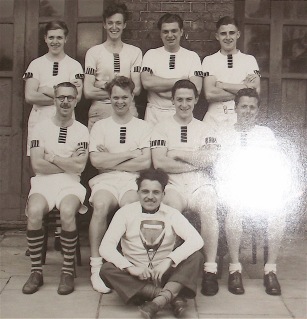 The winning crew in Junior Eights at the 1950 Hammersmith Amateur Regatta. Hill is top right. (Excuse the camera flash.)

A close up of the Hammersmith Cup. It is engraved ‘N Hill’ as Hill’s first name was actually ‘Norman’.

There are few people left from Hill’s time at Auriol but Colin Cheney (who joined in 1945) remembers that at that time bad arguments were settled by impromptu boxing bouts in the clubroom and that Hill took part in at least one of these fights. Cheney also recalls that the Auriol clubroom was frequently strewn with motorcycle parts as members found it a convenient place to rebuild and maintain the only affordable form of motorised transport at the time, something that Hill would clearly have enjoyed. Speaking at the Auriol Club Dinner after winning his first major title in 1962, Hill said:

People ask me, ‘What’s the best thing about becoming World Champion?’ I say it’s that when I visit Auriol, I am now known as ‘Graham Hil’ and not as ‘Johnny Ward’s cousin’.

The ARC crew for Ghent pictured in Rowing Magazine No. 7, Spring 1950. It was Tony Kay, the stroke, that Hill boxed in the Auriol clubroom. History does not record what the dispute was about though I could imagine that Hill coveted the stroke seat.

Probably Auriol’s biggest contribution to Hill’s life was through the fact that it was where he met his wife, Bette, inevitably described as ‘long suffering’ due to her husband’s flirtatious character. Interviewed by Cars for the Connoisseur magazine in 2002, she recalled how she and Graham met:

In 1950 at a Boxing Day rowing regatta at Auriol Rowing Club at Hammersmith while Graham was still in the Navy doing his National Service…. I worked with a girl who was engaged to one of his crew members and they had a Boxing Day engagement party which she took me along and things sort of clicked.

Bette rowed for Stuart Ladies’ Rowing Club (now part of Lea RC) on the River Lea in East London and Graham coached her and her crewmates. They won the Women’s Head of the River for three consecutive years and Bette rowed for Britain in the Amsterdam International Regatta in 1952.

The 21-year-old Hill in his Auriol colours.

In 1952, even before the completion of his National Service, Hill applied to join one of the biggest and best clubs of the day, London RC. With his determination to win, he clearly did not wish to return to the small and relatively uncompetitive Auriol Rowing Club where high level success was unlikely. According to Chris Dodd’s history of LRC, Water Boiling Aft:

John Pinches, the captain, thought quizzically about ‘gentlemen’ but like the cut of his jib, and when Hill said that he was willing to ride his motorcycle from Chatham barracks each day for training, Pinches took him on……. From joining London until 1954 he rowed in twenty finals, usually as stroke, eight of which resulted in wins. He also stroked the Grand eight at Henley in 1953….. 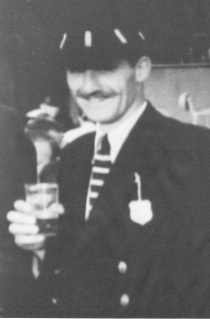 Graham Hill in London RC cap and tie at Henley.

One of the major advantages of rowing at London was that it provided the impecunious young instrument maker with a bedroom in the clubhouse. In the 1954 Head of the River, Hill at 11 stone, 6 lbs / 160 lbs / 72.5 kg stroked the London boat that won the Vernon Trophy for the fastest Tideway crew. This was to be Hill’s last significant rowing achievement as, in the previous year, he had paid £1 to drive four laps of the Brands Hatch in a F3 car and was ‘immediately bitten by the racing bug’. Soon, one sport’s loss was to be another sport’s gain.

Throughout his racing career he continued to support rowing and London (and Auriol – TK), turning out to make accomplished speeches, beginning the demolition to make way for the extension to the boathouse by driving an old Morris car into the wall and opening the new Fairbairn room when the work was done. He famously adopted London’s blue-and-white colours on his racing helmet, attributing his driving success to what he learned from rowing.

As a member of Hill’s first rowing club, now called Auriol Kensington, I may be biased, but I cannot but think that his motor racing colours should have been the dark green and light blue of Auriol.

Hill demolishing part of the London RC clubhouse in 1968. I think modern attitudes to driving a car into a brick wall for a stunt may be different.

In his autobiography, Life at the Limit (1969), Graham Hill wrote:

I really enjoyed my rowing. It really taught me a lot about myself, and I also think it is a great character-building sport……. You have to have a lot of self-discipline and a great deal of determination. You not only get to know about yourself, but you get to know about other people – who you would like to have in a boat with you over the last quarter-mile of a race when you are all feeling absolutely finished. With seven other fellows relying on you, you can’t just give in. The self-discipline required for rowing and the ‘never say die’ attitude it bred obviously helped me through the difficult years that lay ahead…..

Millions were shocked when Hill was killed, not in a racing car, but when the light aircraft that he was piloting crashed in fog on 29 November 1975. The helmet in the colours of London Rowing Club were, however, seen again on racing circuits when Graham and Bette’s son, Damon, entered Formula 1 in 1992 and became World Champion in 1996, the only son of a former Champion to do so. In 2013, Damon’s son, Josh, also competed wearing the blue and white while racing in Formula 3. The legend lives on.