‘The Event From Different Views’, The Illustrated Sporting and Dramatic News, 9 April 1881.

I discovered long ago that, when following a rowing race in a launch, you can either take notes and produce a written report or you can take photographs, but not both. I took the photo option and have used the results to illustrate selections from Peter McConnell’s excellent Official Race Report (here in italics) published on the Boat Race website.

On an overcast day prone to squalls and with a strong south west wind blowing this was always going to be a test of technique as well as stamina.

On the start, the coxs’ hands raised to show that they are not ready. This picture shows the problem of parallax in photographing a side-by-side race – be assured that the boats were started level!

Oxford won the toss and chose the Surrey station which would give them the advantage of the big Surrey bend a third of the way into the Race. Therefore it was Cambridge who would have the early advantage around the Middlesex bend after the end of the Fulham Wall. Off the start both crews sprinted off in the mid 40’s, Oxford taking an early lead.

Seventy five seconds into the race, Oxford lead. The long lens probably exaggerates the closeness of the Oxford ‘7’ blade and that of the Cambridge ‘2’, but the illusion turned real just under four minutes later.

As expected the crews were very close to each other with Cambridge warned by first time Boat Race Umpire Richard Phelps. The Light Blues used the bend to their advantage reeling in Oxford’s lead, hence as they passed the Town Buoy the crews were level.

With both crews at 35 Oxford began to exert their power, pulling out to a 1/3 length lead along the Crabtree Reach.

The crews pictured seconds before ‘the race decider’.

… shortly after the Mile Post, 5 minutes in to the Race, came the moment that effectively settled the result. Phelps had warned Oxford who now had a 3/4 length lead, they responded but Cambridge moved with them and as the Umpire issued a warning to Cambridge the blades of Light Blue 2 man Luke Juckett came into contact with that of Sam O’Connor the Kiwi in the Oxford 7 seat. Juckett was knocked out of his stride, crabbed and was nearly thrown from the boat. Oxford seizing the moment powered away as Cambridge floundered, missing five effective strokes. Worse, Juckett’s rigger was bent meaning his pitch was completely wrong so he could only make a negligible contribution to the speed of his crew.

Juckett emerges from the deep.

Juckett resumes rowing with a gate off pitch and no backstay.

There is ‘only’ fourteen seconds between this picture and the first of this group but this was more than enough time to decide that the race was effectively over.

At Hammersmith Bridge Oxford had an 8 second lead meaning they could choose their own water. They continued to pile on the pressure at a steady 33 strokes a minute and continued to move away from a demoralised Light Blue crew. Even with a strong headwind and rough conditions after Chiswick Eyot, Oxford’s progress was relentless.

At Chiswick Steps the Oxford lead was 16 seconds over 5 lengths, at Barnes Bridge 28 seconds and at the finish a massive 32 seconds. 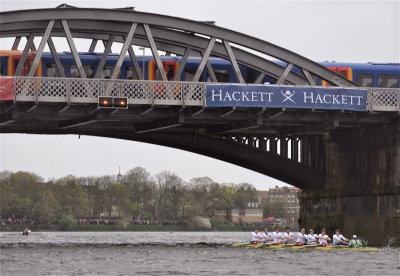 The finish at Chiswick Bridge.

Cambridge cox Ian Middleton raised his hand in protest after the finish but to no avail. Richard Phelps later explained, “I was concerned where Oxford were, so I warned Oxford and they moved immediately. A second later I was happy where the crews were but I then saw the Cambridge bow just twitch-in towards Oxford, so I warned Cambridge. The next thing there was a slight contact but the impact was great.” Talking about the Cambridge appeal he said that “Cambridge’s view was that when the foul occurred Oxford were not on their station. From my perspective Oxford were on their proper station; quite clearly. Contact could only have been in neutral water or at the worst Cambridge were off their station. I advised Cambridge I was overruling their appeal.”

Cox Middleton appeals to Umpire Phelps at the finish.

The luckless Juckett. His broken backstay is clearly evident.

The damage in close up. The pin appears to be upright but it is impossible to tell how much the pitch was out, especially when pressure was applied.

The winning president Malcolm Howard thanked his crew and coach Sean Bowden for an amazing year. He felt the clash but “I don’t think it affected the outcome, we were moving really well, we’d withstood their big push early on and had started to take seats. We were moving on them and would have kept moving.”

A jubilant Hudspith lifts the Boat Race Trophy. The score now stands at Oxford 78, Cambridge 81 with one dead heat. 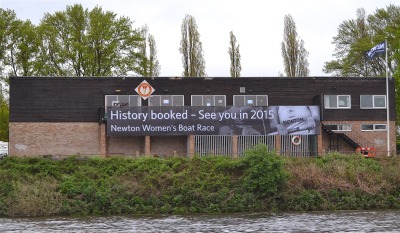 On the way back to Putney, a reminder adorning Tideway Scullers’ Boathouse that next year change will come to the 161st Boat Race. In my opinion, this radical move should go further as proper equality will only occur when the men’s reserve race (Isis – Goldie) is moved from the Tideway to the Oxford – Cambridge Henley Boat Races (where the lightweights and remaining women compete) leaving Boat Race Day to the fastest men and the fastest women, full stop. Should anyone complain about ‘a break with tradition’ I would suggest that they fail to understand the paradox that ‘tradition’ can only survive by evolving, not by standing still.

The race is now on YouTube as is the last Women’s Boat Race to be held at Henley.