Masters of the Boat Race

The start. As in all rowing race pictures taken from the side and astern, the parallax error produces a false picture of the relative positions.

Recently, rowing in Britain has seen an attempt to change the title ‘veteran’ to ‘master’. This has given rise to some rude and wry comments, but if any group of older rowers deserve to be called ‘masters’, it is the participants in the 19th Oxford – Cambridge Veterans’ Race held on a course from Putney to (just beyond) Hammersmith Bridge on Saturday, 5 April. The minimum age for these Old Blues is 35 with an average crew age of not less than 42. This year, the Cambridge crew contained five Olympians while Oxford boated three including medallists Kieran West, Marc Weber and Barney Williams. 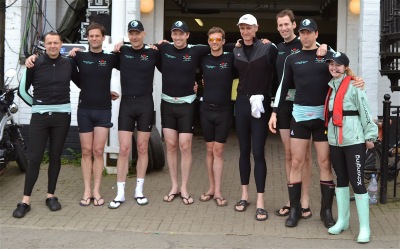 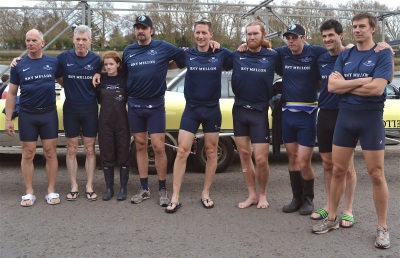 This is the most relaxed and informal of all the Oxford – Cambridge boat races, either on the Tideway or at Henley, and this is especially evident in the gentlemanly rule that ‘any verdict within six feet shall be declared a dead heat’.

A plot is hatched?

Oxford went off the free start high and hard, perhaps a couple of pips higher than the opposition, and quickly got a lead of a couple of seats. Settling well, the Dark Blues increased this to perhaps half a length by the time they passed the OUBC base at Westminster School boathouse. Though Oxford got the first warning off the start, Cambridge got most of umpire Simon Harris’s attention after that. Some put this down to aggressive steering from cox Sarah Smart though she blamed (or maybe thanked) the cross wind.

By the end of Putney Embankment there was only slight overlap. Smart later said that when a crew is in this situation, a cox can call for a big push or say ‘just stick in your rhythm, you will come through them, they will break…’ Bravely, she chose the latter. Opposite the football ground there were several clashes, which, in at least one according to umpire Harris, ‘Cambridge lost out’. It looked like the race was effectively over, but things were about to change. Oxford’s ‘high and hard’ start is a dangerous one for a crew not in training and they started to lose pace.

Cambridge kept their rhythm and past the Mile Post they were only a few feet down. Around this point, in the words of cox Smart, ‘we got the sniff and hit our rhythm really strongly…’ The crews drew level just before Harrods and the Light Blues rapidly went a quarter of a length up. Approaching Hammersmith Bridge, Smart said that ‘… just before we were about to break clear, we had stern four clashing and our bow four just put in a massive push and got us clear and once we were clear it was just clean rowing… all the way’. 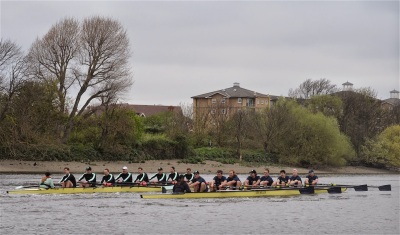 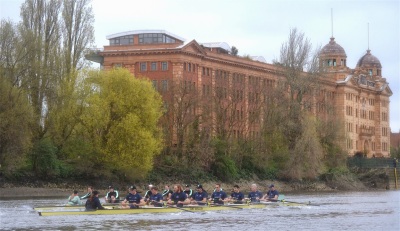 Cambridge were up by the original Harrods Depository.

Cambridge won by 1 1/4 lengths and the score now stands at thirteen wins to them and six to Oxford. A final thought – with the women racing on the Tideway from 2015, how long before there is a veteran women’s race?