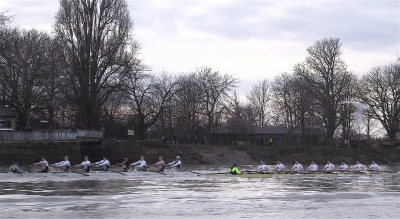 A photograph from a last year Boat Race fixture at Putney Embankment.

Tomorrow, Sunday 16 March, there will be another Boat Race fixture on the River Thames. Cambridge Blue Boat will race against Molesey Boat Club starting from Putney Embankment at 12:45. There will be live tweeting from @theboatrace during the fixture, and a race report will be posted online at www.theboatrace.org later that the day.

If you are at Putney Embankment half an hour earlier, at 12:15, you can watch Goldie go out against another crew from Molesey BC.