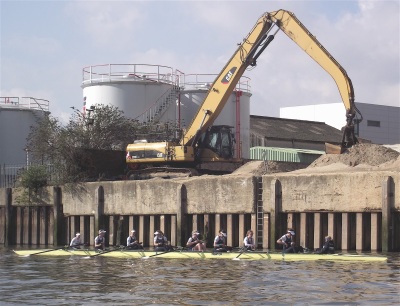 Oxford at Wandsworth. Will they have to dig deep? 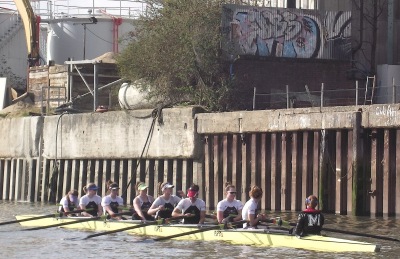 Molesey at Wandsworth. Is the writing on the wall?

Tim Koch reports from the Thames in London:

The forces of nature combined with man-made engineering to produce challenging conditions for yesterday’s (1 March) pre-Boat Race Tideway fixture between Oxford University Women’s Boat Club (OUWBC) and women from Molesey Boat Club (MBC). From upriver, natural forces produced a huge flow of water from recent heavy rains while at the other end of the Thames, human intervention came with the opening and closing of the Thames Barrier. A spring tide added to the fun. The result was, at times, confusion as to which way the water was flowing and it called for the experienced judgement of London Rowing Safety Advisor, Tony Reynolds. 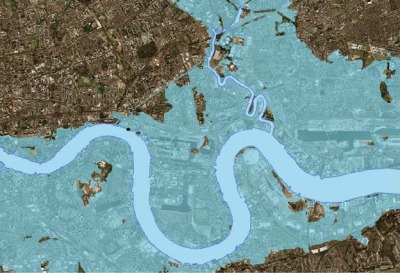 How London might be affected by flooding from the sea without the Thames Barrier. Someone on Twitter said that it looked like a manic version of the BBC soap, Eastenders. Graphic: The Environment Agency.

Determining flow was important as some navigation rules on the Thames between Putney and Brentford, unlike the rest of the water borne world, are not determined by ‘Colregs’. Here, rowers must do what the old watermen did and ‘work the slacks’. This means that when going against the flow of water they must keep close to the shore (where the opposing stream is not so strong). When going with the flow of water, rowers need to keep to the starboard side of the central navigation fairway. 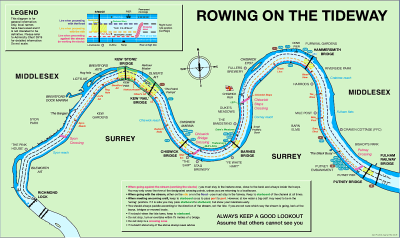 Navigating the Tideway (or possibly a map of the Tokyo subway system).

Partly because of the conditions, the plan was to do four race pieces between Wandsworth Bridge (below the usual Putney start) and Chiswick Eyot (approximately the mid-way point of the Putney – Mortlake course). However, this scheme was abandoned after the first piece.

Molesey took an early lead but they looked rushed and were overrating a more relaxed looking Oxford who, in this and their other pieces bar one, rowed their own race. The Dark Blues soon had clear water over their rivals. Neither cox was in the fastest water but the MBC boat constantly stayed far from the stream and ignored umpire Judith Packer’s calls to move.

Initially it looked good for Molesey (on the right)…. 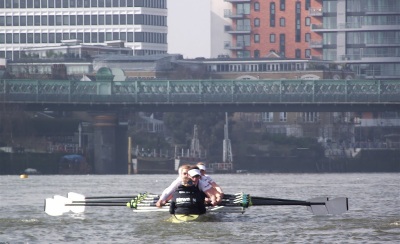 …but Oxford were strong to the finish.

Piece 2: It was decided that the tide had turned so the second race was back in the opposite direction, from the Mile Post to Putney Bridge. It was another high rating start by Molesey but it did not take Oxford long to establish a convincing lead at which point their opponents heads went down and the fight ended. 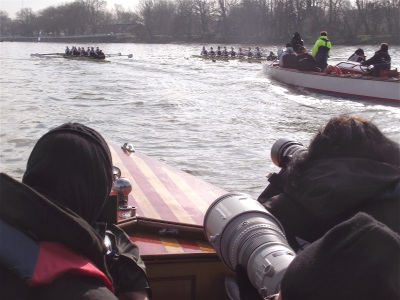 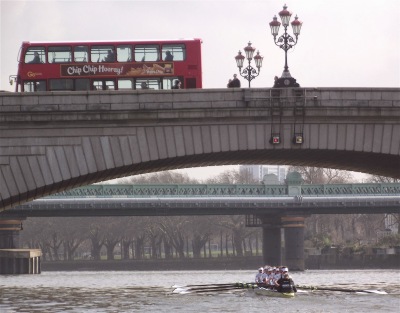 Piece 3: Five minutes from below Putney Bridge towards Wandsworth. This was easily MBC’s best performance and showed that they were in fact a better crew than their pervious two performances had indicated. Their aggression seemed more controlled but perhaps Oxford were complacent regarding their ability to win while rowing at a lower rate. Certainly, in the latter stages of this close race the Blues had to work hard for their marginal victory.

No danger of a clash.

…. close at the last stroke.

Piece 4: Five minutes from Wandsworth towards Putney. Going against the flow of water in a part of the river where the ‘keep to starboard’ rule applied meant racing close to the Middlesex side. The crew on the outside would be disadvantaged by having to row against a stronger stream and I would have put Oxford, the better crew, in this position. However, the opposite was decided. Not surprisingly, OUWBC took an early lead but the Molesey cox salvaged some honour by wisely taking her opponent’s station when Oxford inexplicably moved out into the stream. Coxswains steering a Tideway race must know how the river works. Here, more than anywhere, they can win or lose a race for their crew. 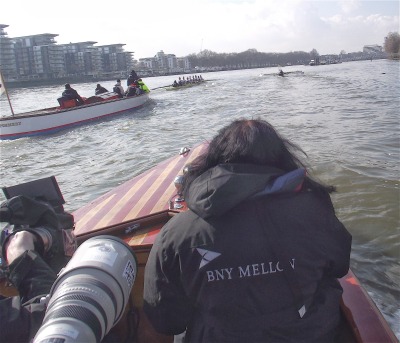 The last piece. The beginning… 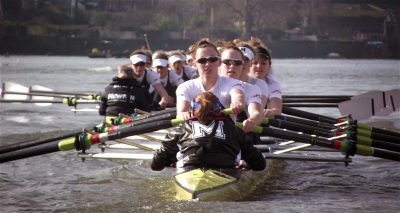 …and the end. A moral victory for Molesey? 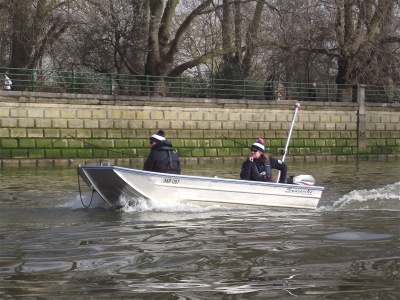 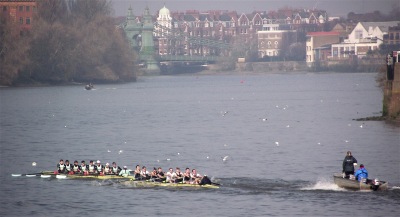