Row, Row, Row Your Boat, Down the Chocolate River! 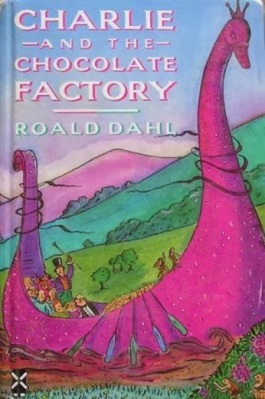 Tomorrow, 23 November, is the anniversary of Roald Dahl’s death, in 1990. Greg Denieffe writes:

One of her tasks was to select a poem, write it out, memorise it and be able to recite it to her class on her return to school. Perhaps to curry favour with yours truly, the poem she selected was “The Rowing Song” (a poem) by Roald Dahl. What’s more, she also suggested I do a blog post for HTBS about it!

Dahl (1916-1990) was born in Wales but both his parents were from Norway. The family used to spend the summer holidays on a little Norwegian island, swimming, fishing and getting about by boat. When Roald was four years old, his father died, so his mother had to organise the trip alone for herself and her six children. Perhaps this is where the inspiration for “The Rowing Song” came from. 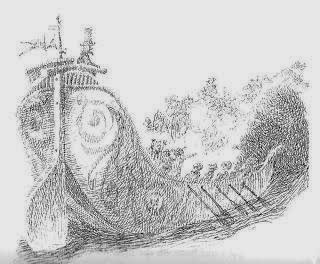 The Oompa-Loompas in rowing action as illustrated by Joseph Schindelman (1964).

Everyone has their favourite Roald Dahl book. In our house, Matilda, James and the Giant Peach, George’s Marvellous Medicine and The Twits vie with Charlie and the Chocolate Factory (1964) for top billing. It is in the latter that “The Rowing Song” can be found (chapter 18, Down the Chocolate River), but before we come to the poem, we are introduced to the Chocolate River and the boat in which the central characters are about to ride.

“Off we go!” cried Mr. Wonka. “Hurry up, everybody! Follow me to the next room! And please don’t worry about Augustus. He’s bound to come out in the wash. They always do. We shall have to make the next part of the journey by boat! Here she comes! Look!”

A steamy mist was rising up now from the great warm chocolate river, and out of the mist there appeared suddenly a most fantastic pink boat. It was a large open row boat with a tall front and a tall back (like a Viking boat of old), and it was of such a shining, sparkling, glistening pink colour that the whole thing looked as though it were made of bright, pink glass. There were many oars on either side of it, and as the boat came closer, the watchers on the riverbank could see that the oars were being pulled by masses of Oompa-Loompas – at least ten of them to each oar.

“This is my private yacht!” exclaimed Mr. Wonka, beaming with pleasure, “I made her by hollowing out an enormous boiled sweet! Isn’t she beautiful! See how she comes cutting though the river!”

The gleaming pink boiled-sweet boat glided up to the riverbank. One hundred Oompa-Loompas rested on their oars and stared up at the visitors. Then suddenly, for some reason best known to themselves, they all burst into shrieks of laughter.

Once everyone is aboard, the boat is rowed downriver by the Oompa-Loompas, heading for ‘The Inventing Room’. On the way the river narrows before entering a tunnel.

The boat sped on down the river. The river was getting narrower. There was some kind of a dark tunnel ahead – a great round tunnel that looked like an enormous pipe – and the river was running right into the tunnel. And so was the boat!

“Row on!” shouted Mr. Wonka, jumping up and waving his cane in the air. “Full speed ahead!” And with the Oompa-Loompas rowing faster than ever, the boat shot into the pitch-dark tunnel, and all the passengers screamed with excitement.

“How can they see where they’re going?” shrieked Violet Beauregarde in the darkness.

“There’s no earthly way of knowing
Which direction they are going!
There’s no knowing where they’re rowing,
Or which way the river’s flowing!
Not a speck of light is showing,
So the danger must be growing,
For the rowers keep on rowing,
And they’re certainly not showing
Any signs that they are slowing…”

In the original movie, the song, now with additional lines (see below), is sung by Willy Wonka played by Gene Wilder as the children and their parents/grandparents take a horrifying, psychedelic ride with Willy Wonka on his boat. Unfortunately, the boat has been changed to a paddle boat and the Oompa-Loompas are nowhere near an oar. 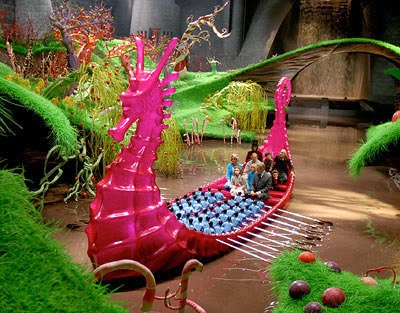 The Boat Ride – Charlie and the Chocolate Factory (2005).

In the second film adaption, the boat is as described in the book but the song is omitted except for the line “There’s no knowing where they’re going!” which is uttered by Willy Wonka, played by Johnny Depp. A group of blue-clad Oompa-Loompas (all played by diminutive actor Deep Roy, who was further miniaturized and multiplied digitally) man the oars on a seahorse-shaped galley traversing the factory’s Chocolate River. Wonka tells the kids not to lick the boat, because then it will get sticky. The Oompa-Loompas slowly row the boat further down the Chocolate River, entering a dark tunnel. Wonka switches on the lights and the boat travels rapidly down a windy tunnel, passing strange rooms on either side. Finally, they reach the Inventing Room, where Wonka tells the Oompa-Loompas to stop.

The 1971 film was a great disappointment to Roald Dahl. Deviations from the book irritated the author, who would have preferred Spike Milligan in the title role. In 2005, the BBC even went as far as to refer to his ‘hatred’ of the original movie. However, he had been involved in the movie and had rewritten “The Rowing Song” for it and the following is the full version recited by Gene Wilder. Changes from the original are in bold.

Is it raining, is it snowing
Is a hurricane a–blowing

Yes, the danger must be growing
For the rowers keep on rowing
And they’re certainly not showing
Any signs that they are slowing.

The first two lines are taken from the poem “Homeward Bound” by William Allingham published in A Round of Days (1866).

Notes on the Text
Charlie and the Chocolate Factory was first published in the USA by Alfred A. Knopf, Inc. in 1964 and in the UK by George Allen & Unwin in 1967. It had taken Dahl four years of writing and editing to get it into its published form. The Roald Dahl Museum and Story Centre has in its archive the various manuscripts and typescripts (the story in the early drafts of Charlie and the Chocolate Factory) produced between 1961 and 1964.

Originally, the Oompa–Loompas were a tribe of 3,000 amiable black pygmies who have been imported by Mr. Willy Wonka from ‘the very deepest and darkest part of the African jungle where no white man had been before’. In 1972, an attack on the book was published by American writer Eleanor Cameron and the political agenda of the story finally began to be debated.

After Dahl and Cameron had many public back–and–forths in various American literary journals (over much more than just charges of racism), Dahl’s publishers decided that “to those growing up in a racially mixed society, the Oompa–Loompas were no longer acceptable as originally written. The following year, to accompany its new sequel, Charlie and the Great Glass Elevator, a revised edition of Charlie and the Chocolate Factory appeared, in which the Oompa–Loompas had become dwarfish hippies with long ‘golden–brown hair’ and ‘rosy–white’ skin.”

The Oompa-Loompas redrawn by Joseph Schindelman, 1973.

Perhaps the best known and most loved illustrations of Roald Dahl’s books have been drawn by Quentin Blake.

The boat scene as illustrated by Quentin Blake (1998).

Roald Dahl died on 23 November 1990, at the age of 74, and was buried in the cemetery at St Peter and St Paul’s Church in Great Missenden, Buckinghamshire, England. According to his granddaughter, the family gave him a “sort of Viking funeral”. He was buried with his snooker cues, some very good burgundy, chocolates, HB pencils and a power saw.

Matt Chapman, a visual artist living in the Bloor West Village area of Toronto, has recently produced personal illustrations for Charlie and the Chocolate Factory. I like the fact that it is in keeping with the text and that the Viking aspect is prominent. I think Roald Dahl would have liked it too.

“A giant sugar Viking boat, complete with one hundred Oompa-Loompas to row, carry Wonka and his guests down the chocolate river to the next location.”

Editor’s note: a special ‘thank you’ to “No. 1 Daughter Denieffe”!
*This post was updated 1 December to reflect Comment 1 by Greg D.