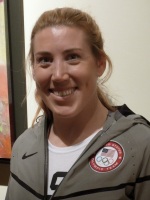 Last Saturday, Sarah Trowbridge, a 2012 U.S. Olympian who competed in the women’s double sculls, gave a talk at the La Grua Center in Stonington, Connecticut. Sarah, who went to high school in Guilford, Connecticut, began to row her senior year at The Blood Street Sculls (Old Lyme) after having tried every other sport there is, more or less. Wanting to continue to row, she picked a college with a great rowing programme, University of Michigan. After graduating, she moved to Washington D.C., joined the Potomac Boat Club and started to practise hard to be able to go to Princeton, where the women’s national team is training.

With her 5’8”, Sarah might not have been among the first ones to be selected for the women’s eight, and when she got picked it was for the sculling boats. Her first great victory came in the double sculls at the 2007 Pan American Games, where she also took a silver in the quadruple sculls. The following year, she raced in the four and took a silver both in the senior and junior world championships.

Sarah was happy to talk and share her story with the more than 100 people gathered in the big room at the La Grua Center. Her story invited us to laugh as it was a good tale she was telling, but there were also unhappy and difficult moments when she did not get elected at first, and at one point she more or less invited herself to Princeton when it seemed the coach “forgot” to invite her. Between 2007 and 2012, she made six national teams, the highlight being the 2012 London Games, where she and Margot Shumway placed sixth in the final of the double sculls. You will find her other results here. Currently, Sarah is acting as assistant coach at Yale.

Unfortunately, there was no time for HTBS to chat with Sarah after the talk, but when asked to comment about the women’s Scullers Super Eight, who had won at HOCR a week ago, Sarah thought it was an amazing achievement that was the real buzz in Boston after the regatta.