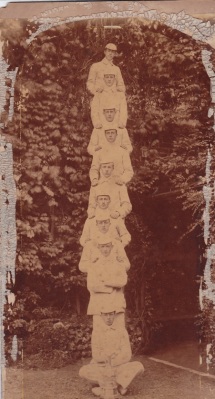 In an earlier post on HTBS called “Toad, Tom, Jack and Billy!”, I mentioned that I had researched the story of The Rowing Bunburys of Lisnavagh. Recently, Turtle Bunbury sent me some old photographs that he found in the archives of the Bunbury family home at Lisnavagh House, Rathvilly, County Carlow.

Included was the wonderful but undated photograph on top described by Turtle as a Victorian Ladder. There is no mistaking the trophy which is The Ladies’ Plate from Henley Royal Regatta and I think the photograph is of the 1896 winning crew from Eton College. What do other HTBS readers think? 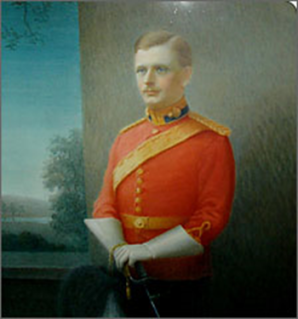 Stroke of the 1896 crew and standing behind the seated coxswain would be Hon. W. McClintock Bunbury, known to his family and friends as Billy Bunbury (1878-1900). Can you see a similarity to the young boy in the ladder?

William McClintock Bunbury was born at Lisnavagh in 1878, the eldest son of Thomas Kane (Tom) McClintock Bunbury, 2nd Baron Rathdonnell, and his wife, Lady Katherine Anne (Kate) Rathdonnell. Billy was educated at the Dragon School in Oxford and Eton College [April 1892 – December 1897] where he was in Rev S. A. Donaldson’s House. Donaldson was successor to Rev Edmund Warre and like him an enthusiastic rowing coach. As was his father before him, Billy was captain of boats at Eton and stroked the winning Ladies’ Plate crews of 1896 and 1897. He joined the Scots Greys shortly after leaving Eton. He was posted to South Africa in December 1899 and died ten weeks later, on the 17 February, 1900, having been shot in both legs in a raid on a Boer position eight miles outside Kimberley.

In the seven-seat and standing behind Billy Bunbury would be William Dudley Ward (1877-1946), one of the rowers depicted in The Rowers of Vanity Fair. 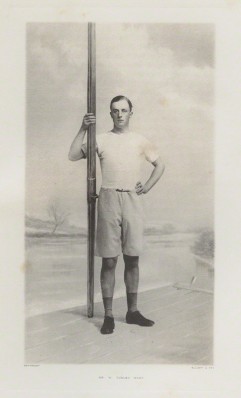 William Dudley Ward, ‘seven’ in 1896 – Famous for having a far-away-look in his eyes! (© National Portrait Gallery, London. This work is licensed under a Creative Commons Attribution-NonCommercial-NoDerivs 3.0 Unported License.)

In the three-seat and third from the top would be Felix Warre (1879–1953) depicted above in the Illustrated London News in 1898 as part of the Oxford University Boat Race crew.

Also included in the Bunbury archives was a photograph, again undated, but a similar photograph on the Balliol College website identifies the race as the final of the Ladies’ Challenge Plate in 1896: 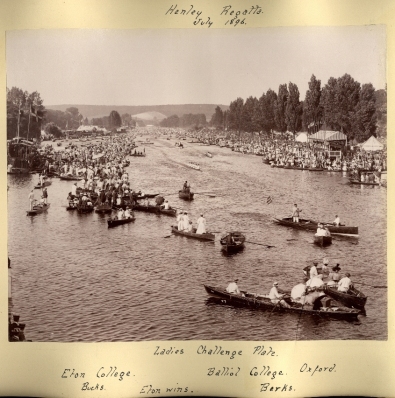 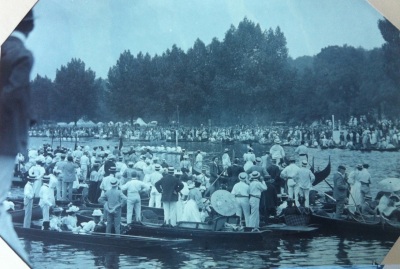 Two photographs were identified as from Henley. The one above is in good condition and was captioned: Ladies’ Plate 1896 – Eton & Jesus (Oxford).

The official result of the final was that Eton College beat Balliol College, Oxford by 2½ lengths in a time of 8 min. 6 sec.

Jack’s first success at Henley Royal Regatta was in the two seat of the Eton crew that won the Ladies’ Plate in 1868. The boat was stroked by his brother Tom and for the next two years Jack would stroke the Eton eight to two more victories in the same event.

After finishing at Eton College in 1870 Jack went up to Oxford University where he quickly joined the Brasenose College Boat Club, the oldest collegiate boat club in the world. In his short stay at the university, he won The Trial Eights (1870), The Silver Sculls (1871) and The Silver Challenge Oars for pairs (1871). 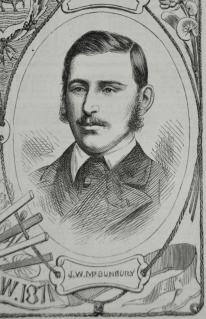 Jack Bunbury as depicted in the Illustrated London News in 1871 as part of the Oxford University Boat Race crew.

Jack was originally selected in the stroke seat of the Oxford crew for the 1871 Boat Race but was switched to the seven-seat close to race day.  It seems to have worked better for them and by March 18, the Penny Illustrated favoured Oxford over Cambridge. On Saturday, 1 April, the two crews set off but it was Cambridge who, despite a last minute spurt by the Oxford crew by the Mortlake brewery, won by a length in 23 min. and 5 sec. (‘with a foul wind from the north east’).

At Henley in July 1871, Jack was defeated by Mr. William Fawcus of the Tynemouth Rowing Club, shortly before Fawcus defeated Mr. Long, the winner of the Wingfield Sculls. Jack was also in the four seat of the Oxford Etonians crew that won the Grand Challenge Cup. This was the sixth and final time that the Eton old boys would win the premier event at the premier regatta in the country. It was Jack’s finest hour in a boat and probably his last. The up-and-coming London Rowing Club was beaten in the final by 1½ lengths in a time of 8 min. 5sec.

Jack was only at Oxford until December 1871 when he left to pursue a career in the army. Sadly, he died in 1893 at the age of only 42 and was buried in the graveyard at St. Helen’s Church, Tarporley, Cheshire.

Maybe other HTBS readers can help positively identify the undated photographs and their subjects?

There were a few more photographs found at Lisnavagh but they are of rather poor quality and undated. The following photo is clearly the Eton College boathouses and perhaps there is a Bunbury in the crew. The close-up shows the presence of the photographer was indeed an occasion that the boys were not going to miss.

Thanks to Turtle Bunbury for sending these interesting photographs.