The Riverview Regatta – Rowing for Gold

This past weekend the row for the Riverview Gold Cup was held Downunder, HTBS’s special reporter Louis Petrin writes,

It was 127 years ago that Saint Ignatius’ College of Riverview organised the first of its annual rowing regatta. Now simply known as the Gold Cup, it is one of the oldest rowing events in Australia and the oldest New South Wales schoolboy regatta. It is also contested by club boats in the Men’s Open VIII, and in recent years by women and schoolgirl crews.

This past weekend saw the Riverview Gold Cup held along a 1,400-metre course on Sydney’s Lane Cove River. The course is locally famous as the only dogleg course on the NSW rowing calendar, making it a great test of cox and crew. The “Leaning Pile” course is where the famous rowing crash occurred as seen on YouTube:

The college was founded in 1880 by Father Joseph Dalton, first Rector of Saint Ignatius’ College. The “St. Ignatius College Rowing Club” (fondly called Riverview) was founded late in 1882 under the guiding hand of Father Thomas Gartlan. The first appearance by a Riverview crew in a rowing challenge was in the School’s Race for the Lord Mayor’s Cup in 1853, which it then went on to win in 1884.

The Rowing Club held its first regatta on Sunday, 20 June, 1885, with some 3,000 visitors to the College. It was recorded in many of the daily newspapers of the time and hailed as “the first College Regatta in the Colony”.  Its success was trumpeted, with one reporter writing, “such cheering and enthusiasm has rarely if ever before been noticed at an amateur meeting”. The winner of the “All Schools Race” silver trophy was Sydney Grammar School by four lengths from Riverview.

In the 1890 Regatta, a race was instituted called “The Lane Cove Challenge Eights”, won by Mercantile Rowing Club (not a school) which changed to the “Riverview Gold Cup Regatta”, now the name of the modern day Regatta.

In 1892, the Regatta Committee invited the residents of Lane Cove, regular spectators of the local race, and others interested in rowing to subscribe to a fund to acquire a suitable Gold Cup, as a trophy for this race. The result is the Riverview Gold Cup, as we have it today.

The Trophy took about three months to complete and was put on show in April 1893. At the time it was said to be the only gold cup for rowing in the world. According a local newspaper report: 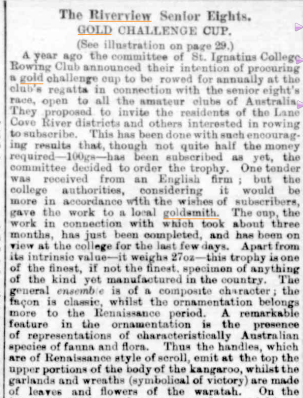 The Gold Cup trophy, now awarded to the winning men’s open eight, was first competed for at the 27 May 1893 regatta, or 119 years ago. The Ignatius’ Regatta for this year had nine crews competing in maiden fours, with North Shore winning by two lengths from Sydney, Glebe third, and East Sydney and Mercantile behind. The regatta itself was said to be a great success: “such cheering and enthusiasm has seldom, if ever before, been noticed at an amateur meeting”. It was not until 1929 that the first school crew, St Ignatius, competed in the Gold Cup Challenge Eights. The first schoolboy crew to win this open event was Sydney High School in 1938, 48 years after the first race. It was not until 1963 that Riverview won the Gold Cup!

The winners were originally each awarded gold medals and now they receive gold oars as individual trophies for this event. For the other events, winners receive a silver oar. Since the time of its inception, the Gold Cup has been looked upon as an outstanding trophy for rowing.

This year donations are being called for a new gold cup to be made for the women’s eight race to match that awarded to the men’s eight. The cost of the trophy including display cabinet will be around $16,000. The trophy will be made by sculptor Jennifer Mann. The female figure on top of the cup will be modelled on noted NSW rower Tess Gerrand. Tess is an Olympian – 2012 London Olympics Women’s Eight – and three times NCAA champion when at Yale. It will also feature an engraving of the 2001 Australian World Champion Women’s Eight.

On Saturday, 3 December, the regatta was held and the Women’s Challenge was won by Mosman Rowing Club (4m 45. 03s) and the Men’s won by University of Sydney (4m 03. 80s); Sydney was coxed by Toby Lister (Olympic Men’s Eight cox) which made it his eight win! 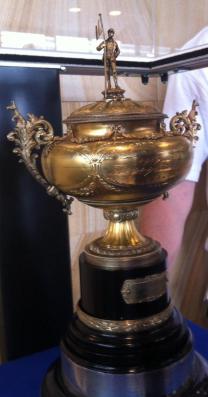 The Gold Cup returned to its secured cabinet.