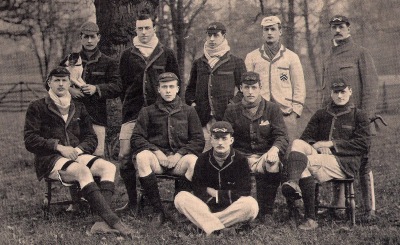 After I had posted yesterday’s poem by Rudie Lehmann, “A Little Bit Of Blue”, I came to realise that the reader of HTBS might get the idea that Lehmann had written this poem to honor the Dark Blues in the photograph that I posted with the poem. That was not the case. Although, this Oxford crew of 1897 was a particularly good one.

Right now, I am in the middle of doing some research on the American oarsman Benjamin Hunting Howell, who rowed for Trinity Hall, Cambridge, between 1895 and 1898, and then for Thames RC until 1900. Howell was picked for the Light Blues boat for the 1897 race against the Dark Blues. Oxford had had a fairly long winning streak which began in 1890 (and would go on until 1898), but for the race in 1897 Cambridge had good hopes to end Oxford’s row of victories. Gordon Ross writes in his The Boat Race: The Story of the First Hundred Races Between Oxford and Cambridge (1954):

Edwards, Philip, Burnell, Carr, Gold and Pechell would win the 1898 race as well. Two of these fine oarsmen would stand out in the history of rowing: Charles ‘Don’ Burnell, who was called ‘the strongest sweep in England’ and who won an Olympic gold medal in the eights in 1908 (and who was the father of Dickie Burnell); and Harcourt ‘Tarka’ Gold, who after his active rowing career would become a very successful coach (Olympic gold medal in the eights in 1908 and 1912), Chairman of Management Committee of the Henley Royal Regatta and the first person to be knighted for his services to rowing (Steve Redgrave being the second one).

No, it did not come as a big surprise that the Light Blues lost the 1897 race. According to Gordon Ross, the bookmakers had the odds of 5 to 1 on Oxford.