‘Bert And Dickie’: Drama Or Farce? 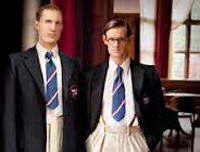 Let’s continue with the 1948 Olympic rowing from a little different angle. Here HTBS’s Tim Koch writes about the BBC film Bert and Dickie (called Going for Gold in America):

It is normally advisable to take a ‘Dr Johnson’ approach to any drama centred on rowing. The 18th-century man of letters famously said:

‘Sir, a woman’s preaching is like a dog’s dancing on his hind legs. It is not done well; but you are surprised to find it done at all.’

Films about rowing are rare and are rarely done well. Film makers prefer to make dramas about popular land based sports as the action sequences are considerably easier to shoot and edit to produce a reasonably convincing scene where an actor is portraying a top class athlete. As far as I know the only rowing sequence in a movie that convinces those who know about the sport is the Henley scene  in The Social Network. When ‘rowing dramas’ are made they tend to closely follow the clichés set out in the guide ‘How to Make a Rowing Movie’ on the now sadly inactive ‘Tideway Slug’. 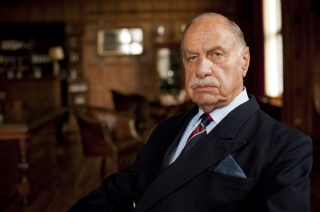 Bert and Dickie, however, threatened to be different. Firstly, it was made by the BBC who, famously, are rather good at this sort of period drama. Secondly, it had what film and TV people call ‘high production values’ that is, they spent time and money attempting to get it right. Thirdly, it employed some very talented actors in both lead and supporting roles. This included the wonderful Geoffrey Palmer who, as far as I know, had never appeared in anything bad – despite always playing much the same character. Finally, a large part of Britain and the world are in an ‘Olympic Mood’. At the present time many of us are susceptible to a ‘feel good story’ of plucky chaps winning against the odds. I wanted to like this programme. 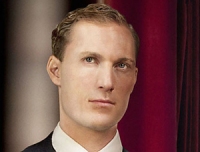 The basic ingredients of a dramatic story are all there. An ‘odd couple’ are thrown together by circumstances not of their making. They do not like each other. There is social snobbery and economic deprivation. Eventually they learn to ‘pull together’ because they realise that they have a common goal and because they discover that they have a common problem. In this case, the problem is slightly mad fathers, Dickie’s dad representing the old order where it’s the taking part that counts, Bert’s dad representing the future, believing that winning is all. The tension on the Henley Reach is punctuated by gentle humour on land. There are several delightful cut aways to conversations between the Prime Minister and Chairman of the British Olympic Committee as they wrestle both with the great concepts and the mundane detail of the Games. There are funny and touching scenes where post war ‘austerity’ Britain attempts to make the best of things, especially in the presence of the over cossetted Americans. Unfortunately, the cutaway scenes where Bert’s banished girlfriend (a slightly superfluous role) watches the races from a TV shop in Scotland with a local policeman relaying the commentary to the crowds outside (and to the viewer of course) is an unsatisfactory device. Possibly it is some sort of homage to the British ‘Ealing’ comedies of the 1950s.

Of course, the eternal problem of a story ‘based on real events’ is that we all know how it ends. Thus we have to enjoy the journey that takes us to the predictable and inevitable conclusion – in this case Olympic glory and approval from respective fathers.

A review of this journey on Hear The Boat Sing must be slightly different to one in most other places. ‘Dramatic criticism’ is one part but for rowing historians there is also the question of the accuracy of people, events and objects.

How does Bert and Dickie work as a piece of entertainment? It is commonly observed that ‘drama’ is real life with the boring bits taken out. In this necessary process the characters can become slightly one-dimensional, emotions can, unnaturally, change in an instant and all difficulties are unrealistically permanently overcome. ‘B and D’ is not immune from these faults – but very few dramatic productions are. For me, these criticisms did not spoil my enjoyment of ‘the journey’ from start to finish. The combination of an intelligent script, good acting, high production values and wonderful cinematography (with light use of CGI) makes a very simple story work. It is, simply, a bit of fun. For Brits, still basking in post-Olympic Regatta success with their cynicism blunted, the pleasure is highlighted.

Was it ‘accurate’? In a couple of words – pretty much. Yes, the sculling was bad, we knew it was going to be, let’s accept it and move on. The boats and equipment seemed correct. The costumes were fine bar the inaccuracy, pointed out by Jack Beresford’s daughter, that her ‘father’ was portrayed wearing a brown suit at the Olympic Regatta! The stand in for the Leander clubhouse was a little over grand and the unimpressive Leander pontoon was replaced by the more substantial Eton Rafts but there is nothing ‘wrong’ with such things. The only inaccuracy that made me wince was when Don Burnell said that he won an Olympic gold medal in 1908 in ‘the men’s eights’. I am sure that Burnell senior would have never made such a 21st century gender distinction, it was like having the character say something like ‘you is well good’. On the other hand, I did actually learn something. The film portrayed Jack Beresford Jnr. as, in Chris Dodd’s words, ‘mentor rather than coach’. I would have dismissed this as one of the things film makers do to keep the story flowing had Chris not agreed that this was in fact the case. 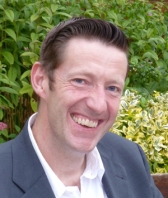 I must further commend writer William Ivory (on the right) and director David Blair because, not only was their production reasonably accurate, but it was also brave in that it did not avoid introducing slightly difficult ideas for a non-rowing audience. In the best traditions of the BBC, there was little ‘dumbing down’. There were references to rowing’s contracted amateur – professional debate, detail on rigging and rowing technique, and a discussion on using the repêchage system to gain an advantage. These ideas could have easily been passed over to keep the interest of the least attentive viewer, something all too common in modern film and television.

The ‘clincher’ for me (and anyone associated with this blog) came with a scene towards the end, just before ‘the big race’. Bert is handed a note that says: ’Make the boat sing’. It almost made up for the over sentimental father-son reconciliations on the finish pontoon. However, Bert and Dickie, for all its predictably, is a dog that dances well.

There is a tribute to Bert and Dickie by ‘JBT’ on YouTube, here.