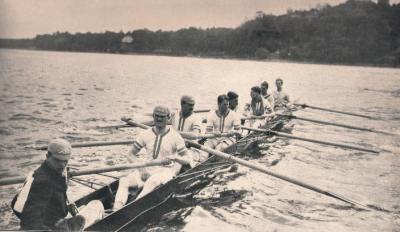 Leander’s eight is getting ready for an outing, in the foreground Ben Wells, cox, and Philip Fleming, stroke.

The Leander oarsmen had rowed together many times. The British rowing world of the early twentieth century was refreshingly casual and laidback. Some members of the crew representing Britain were brought together almost by chance. The man who rowed in fifth position, Angus Gillan, was twenty-seven and had been working abroad for the Sudan political service. He had won a gold medal at the 1908 Olympics and four years later, when on leave, he bumped into a fellow rower in London who asked if he was available to join the Olympic crew for 1912. He did so with alacrity. Stanley Garton, rowing at No. 6, received a letter from a friend saying “Now we must get Horsfall” to join the eight. None of the gruelling selection process for the Olympic teams of 2012 was evident in the getting-together of the eight of 1912. But the rowers were talented and dedicated and Harcourt Gold, who had himself been a Henley cup-winning oarsman, put together an eight that could win a medal, just as he had done for the 1908 Olympics when a Leander eight had taken the gold medal.

Although none of them knew it, it was the eve of the First World War in which they all went on to fight. It is remarkable when so many died that only one of the rowers, Alister Kirby, lost his life. He had survived the Battle of Ypres, but died in France of a tumour on his knee in 1917. Others were luckier. Ewart Horsfall, like Kirby, had joined the Rifle Brigade and then transferred to the RAF. Unusually, he won both a Military Cross and a Distinguished Flying Cross. He went on to take a silver medal in the eights at the 1920 Olympic rowing regatta on the Grand Willebroek Canal, outside Brussels, and to be manager of the 1948 Olympic rowing eight, together with Angus Gillan. After working in Sudan, Gillan played a key role at the British Council and at the Royal Overseas League. Leslie Wormald joined the Royal Field Artillery and won a Military Cross in 1918 in France.

Swann (on the left), who also rowed in the 1920 Olympic silver eight, joined the church and went to France as chaplain to the forces. His career led him to Kenya, Egypt and India. Between 1941 and 1952, he was Chaplain to the King and later Chaplain to the Queen, from 1952 to 1965. Philip Fleming went to Europe with the Queen’s Own Oxfordshire Hussars and after the war was a partner of the family bank. Henry Wells became a distinguished barrister. Stanley Garton, coached subsequent Oxford eights but died young in 1948. His daughter, Rosalind, married the son of his friend ‘Don’ Burnell of the famous rowing family. Don’s son, ‘Dickie’, won a gold medal for Britain rowing in the double in the 1948 Olympics.

In rural Berkshire, the granddaughters of Wormald and Garton decided to celebrate their illustrious grandfathers. By chance, they had found another Berkshire descendant: the grandnephew of Edgar Burgess. They planned a party and began a tentative search for descendants of the others in the eight. They made contact with both the River & Rowing Museum and the Leander Club in Henley and the detective work started to pay off. First of all, someone living in Henley had a feeling that her next door neighbour had an Olympic grandfather and passed on contact details. Sure enough, the neighbour was the granddaughter of Ewart Horsfall. Next, Leander put a photograph of the eight in Hippo Happenings, their monthly eShot newsletter. Helpful ex-rowers from around the country wrote in, including the first of the generation of rowers’ children, Allan, the son of Angus Gillan.

A member of Leander handed in some pages from a Swedish book which he had found in a junk shop. It had images of the 1912 crew and of the Stockholm Olympics, which they had never seen before. Contacts with the Fleming family found Robin Fleming, son of Philip. A wonderfully helpful Horsfall connection led us to the family of Henry Wells, the cox. We discovered from his two grandsons that he was always known as Ben. Having found the cox, it emerged quite how famous the coach, Harcourt Gold was. He had, as the first person, been knighted for his services to rowing in 1949, the second being Sir Steve Redgrave in 2001. We found not one, but two of Gold’s grandsons and two granddaughters. There just remained Sydney Swann, or ‘Cygnet’ as he was known to his rowing friends. Research on the internet gave names for his granddaughters and Leander found an address in Scotland for one of them. A friend in their village said, “Yes, they still live there and yes, the house is simply stuffed with oars.” We had found Swann’s granddaughters and, through them, his daughter Celia. Of all the oarsmen Kirby alone, having died, left no descendants. 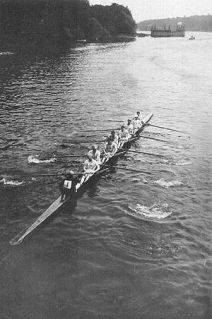 The detective hunt had found descendants of every one of the eight that went to Stockholm. One hundred and twenty-four of them got together yesterday, on Sunday, 29 July, at the start of the 2012 Olympics, to celebrate the centenary. Children of the rowers and their grandchildren, great grandchildren and great-great grandchildren were there. They brought with them the collected memorabilia of their ancestors: Olympic oars and a rudder, two sections of a boat, several of the gold medals, a laurel wreath and many photograph albums. A member of each family made a short speech about their forebear. All then raised a glass to toast the fine achievement of these great rowers, their illustrious ancestors.