It is with great pleasure that HTBS is posting a two-piece article by Victoria Fishburn (on the right), who is living in Berkshire, England. She has an MA in Biography and is writing the life of Daisy, the Countess of Warwick (who was mistress to Edward VII and became a reforming socialist). Fishburn’s grandfather was Leslie Wormald, Olympic gold medallist in the eights at the 1912 Stockholm Olympics. As it is one hundred years since Wormald and the other oarsmen of Leander Club became Olympic champions in the eights, Fishburn and her friend, Georgie Woods, whose grandfather was Stanley Garton and rowed in the same boat as Wormald, decided to celebrate their grandfathers’ triumph. This is the story about the Leander eight, and how two ladies worked together to assemble one hundred and twenty-four descendants of the oarsmen in that eight. The celebration of their rowing ancestors was held yesterday, Sunday, 29 July.

When London won the competition to host the 2012 Olympics, two Berkshire women realised that it would be a fitting time to celebrate a family Olympic centenary. They had long known that their grandfathers had rowed together in 1912. It was now one hundred years ago Leslie Wormald and Stanley Garton won a gold medal for Great Britain rowing in an eight in the Stockholm Olympics. And the Olympic excitement of 2012 made some kind of centenary celebration a must. Their grandfathers, like the rest of the rowers who made up the eight, were amateurs: gilded young men of the Edwardian era who had gone to the best public schools: Eton, Winchester, Rugby and Edinburgh Academy. Similar types of British sportsmen were to run for their country in the 1924 Olympics, as famously portrayed in the re-released film Chariots of Fire.

The 1912 rowers had spent the preceding years gaining reputations as talented oarsmen rowing first for their schools and then their universities. One of them had rowed in the 1908 Olympics which were held in London, with the rowing taking place at Henley. Most of the 1912 eight had won both the University Boat Race and the Grand Challenge Cup at Henley in 1911. Apart from the Metropolitan rowing clubs, the university eights were the best around, so it was to Oxford and Cambridge that the Olympic committee went to choose the British eight for the Stockholm Olympics.

Harcourt ‘Tarka’ Gold (on the right) was the rowing coach for Magdalen College, Oxford, and had himself been a respected oarsman in his day, stroking the Oxford boat at four Boat Races in 1896-1899. He chose most of his eight from his own college, though he included one Cambridge man, Sydney Swann from Trinity Hall. Leather photograph albums are still in the collections of all the rowers’ families today. From these album pages good-looking young men look steadily back at you. Their public schools had taught them team spirit and the importance of doing your best whether you won or lost. In the eight of 1912 rowed Edgar Burgess in the bow and next to him Sydney Swann. Rowing at positions in the middle of the boat were Leslie Wormald, Ewart Horsfall, Angus Gillan, Stanley Garton and Alister Kirby. Philip Fleming, rowed stroke and another Magdalen man, Henry ‘Ben’ Wells, was the cox. They rowed under the name of the Leander Club. Its iconic status in the rowing world was reconfirmed in July 2012 as the five-time Olympic gold medallist Steve Redgrave rowed the 2012 Olympic torch up the Thames to land at Leander’s dock.

The British Leander eight was joined in Stockholm by a second eight from New College, Oxford, led by one of Oxford’s best strokes, R.C. Bourne (on the left). The other countries that sent eights were Australia, Canada, Sweden, Norway, Germany and Hungary. Germany and Sweden, like Britain, each fielded two eights but, even though the Australian eight had beaten Magdalen in the Grand final at Henley two weeks earlier, it was the British crews that proved to be the strongest. After exciting heats rowed over three days it was an all-British final on Friday 19 July between two old rivals: Magdalen/ Leander and New College. Henley’s traditions travelled with them: the banks of the bay Djurgårdsbrunnsviken in the central parts of Stockholm were named ‘Berks’ and ‘Bucks’. Magdalen chose the Berks bank and, in a fine race, won by about a length. The eight itself remains at the Riksidrottsmuseet, the national sport museum in Stockholm. The Leander Club of 1912 could not afford to bring it back to England. 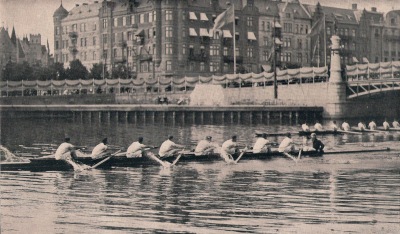 The Olympic final in the eights: Leander has a comfortable lead over New College BC when there is only a couple of hundred metres to go to the finish.

New College felt aggrieved by what they saw as bad sportsmanship by Magdalen/Leander. Sportsmen have always tried to behave like gentlemen and, in 1912, New College argued that Magdalen did not. The saga is chronicled in the New College archives. The New College captain in Stockholm had won the toss to choose banks but, in a gentlemanly fashion, had offered the choice to Magdalen/Leander. Then, according to the archives, the decidedly ungentlemanly Magdalen/Leander crew went against convention and chose to row on the best bank. The bank they rejected had the disadvantage of a protruding bathhouse which had to be rowed around. New College were not able to pick up speed after this ‘blockage’. Archives at Magdalen that might have given another side to the story were destroyed in the 1940s and the controversy has lasted to this day. On 11 June, 2012, New College held a 100th Anniversary Match Race with two races against Magdalen. They each won one and lost one. Although, in a spirit of friendship, they invited Magdalen to celebrate afterwards. ‘God Damn Bloody Magdalen’ is still the toast at meetings of the New College Boat Club.