Women’s HoRR – The View From The Cox Seat 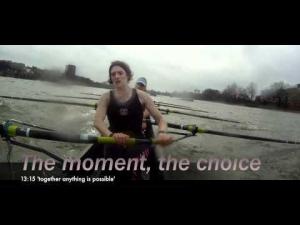 On 3 March it was time for the Women’s Head of the River Race in London. Tim Koch reports:

There are many rowing videos on YouTube but the majority feature very average rowing and are usually either unedited or badly edited. A notable exception to this is an in boat video showing the winning crew in the Women’s Head of the River Race held on the Mortlake to Putney course on the Thames on 3rd March. The text accompanying the film says:

Thames Rowing Club go Head of the River on the 3rd March 2012 at 11am. Going off 12 on a neap tide they weaved their way through to win in 20.11 minutes. A suicidal push into a brutal head wind after Hammersmith Bridge won them the race. Listen to the powerful calls from Hannah and watch the crew find their soul. It is the first non-composite win for Thames since 2001 and their 17th since 1930. Well-done from bow Carrie, Sarah, Sophie, Charley, Catherine, Barbara, Emma and stoke Sophie. Respect.

Cut down to seven minutes the video shows a great crew in action (many men’s boats would like to be as fast), some fine coxing and an unusual view of the famous ‘Championship Course’. Enjoy the video here.

The Pennant Winners were: