Tim Koch: The Boat Race Is Near 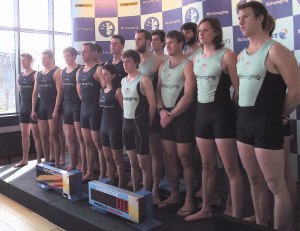 Here is HTBS’s Tim Koch report from the official weigh-in and announcement of the crews for the upcoming Boat Race between Oxford and Cambridge on 7 April. Tim writes:

The official weigh-in and crew announcement for the 158th Oxford – Cambridge Boat Race took place on Monday 5 March. It was held in view of the 2012 Olympic Stadium, a reminder of one of the few events that will draw a bigger audience than the ‘Battle of the Blues’.

The names, facts, and numbers are as follows:

Excluding the cox, Cambridge averages 96.3 kg / 211.9 lbs while Oxford averages nearly 8 kg / 17.5 lbs a man lighter at 88.4 kg / 194.5 lbs. The Light Blues are helped in the battle to gain the psychological advantage of being the heavier crew by their six man, the 109.6 kg / 241.1 lbs American Steve Dudek. There are always stories that crews will drink large amounts of water before stepping on the scales in an effort to appear heavier. Some thought that Dudek’s beard was also an attempt to weigh more than Thorsten Engelmann, who is the heaviest man ever to take part in the race at 110.8 kg / 243.8 lbs. Of course, Cambridge was the heaviest crew last year – and lost. A crew racing over four miles on the Thames Tideway needs a lot more than a few extra pies inside them. 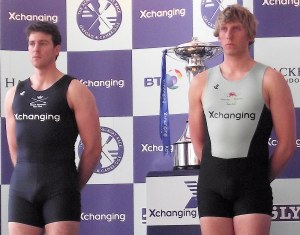 Following interviews with the crews and coaches, I asked former BBC journalist Martin Gough for his initial impression of the proceedings.

It was interesting to see the difference in demeanour of the two coaches in interviews, even though Cambridge weighed in with a significant advantage. Oxford’s Sean Bowden – aiming this year to secure his 11th win in 18 attempts – was all smiles, clearly enjoying the sparring, while his counterpart Steve Trapmore was clearly very nervous. Perhaps the media attention played a part but Trapmore was also very honest about the size of the task ahead, admitting, “I think we’ve got a long journey ahead of us.”

In Britain there is often criticism over the lack of British students in Boat Race crews, usually from people who have little or nothing to do with rowing. It is perhaps understandable that they are protective of a much loved ‘national institution’ but I do not have a problem with this. It is the ‘Oxford – Cambridge’ Boat Race and the participants are genuine students at those establishments. There are no lower entrance requirements or academic standards for international oarsmen. Indeed, it has been proven that Blues get slightly better than average degrees, probably because of the high level of time management required to balance training and studying. There are also those who do not like the increasing ‘professionalism’ of this amateur race but they may gain some compensation from the fact that four of this years rowers only learned to row at university (Alex Woods and Dan Harvey for Oxford, and Alex Ross and Moritz Schramm for Cambridge). One criticism of the race that has come more from inside the sport than out is the exclusion of women from the Tideway race. As Martin Gough reported a few weeks ago, this is set to change – eventually. Martin comments:

Many asked why the decision to move the Women’s Boat Race to take place alongside the men’s on the tidal Thames was not made sooner; now they are asking why we have to wait for three years after the announcement for the move to actually take place but there is a lot of work to do before then. Results from Saturday’s Women’s Eights Head – where Cambridge finished ninth and Oxford 21st – confirmed they are among the best crews in the UK but not (like the men) the best in the world, and hence the need for further investment and improvement in infrastructure. Then there are the logistics of staging a third race, along with TV coverage and a following flotilla, alongside the men’s blue-boat race and reserve race in a limited tidal spot. More details are bound to emerge as plans take shape over the next few months. 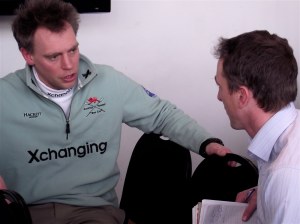 When I asked Martin what he though the peculiar aspects of this year’s race were, he very interestingly extended his answer to cover the future of the Boat Race and its historic relationship with British international rowing. 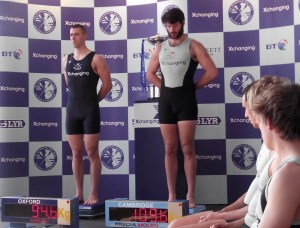 The strength of the Boat Race squads is always diminished in an Olympic year – although Bowden believes president Karl Hudspith and six-man Alex Davidson could both be in the Great Britain squad in future – but it will be interesting to see whether current internationals take part in 2013, as they have previously at the start of each four year run up to the next Olympics. The GB team is one that likes to keep its rowers based at a central HQ and there have been arguments in the past with oarsmen training at Oxford and Cambridge. Also American universities seem to be recruiting British oarsmen more heavily, with many offering full scholarships, which may cut down the numbers applying to these two institutions.

It would be ironic if, just as the women receive sponsorship to enable some of them to pursue an international rowing career via participation in the Boat Race, this route to representing one’s country becomes one less used by the men. 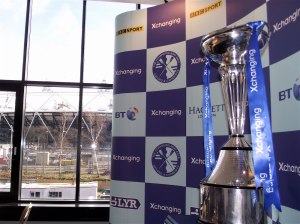 The Trophy with the Olympic Stadium in the background.

The Race, which is sponsored by Xchanging for the last time, will take place at 14:15 on Saturday, 7 April.