Harvard Takes It All!

No, Yale did not managed to upset Harvard in any of the three races on the Thames in New London, Conn, today – Harvard took it all. And with ease, too, one might add.

The fog was thick this morning along the Connecticut shoreline and up on the Thames River (the American way to pronounce the river’s name rhymes with the name ‘James’). For the freshmen’s 2-mile race upstream at 3:00 p.m., the fog had burnt off, but it was windy and the waves had started to build up, and there were plenty of grey clouds. However, Harvard’s freshmen did not have any problems at all to take the lead and win.

For the Second varsity 3-mile race, the wind had calmed down. Harvard was soon in the lead, but around the 1-mile mark, when Crimson had a comfortable lead by almost a boat length, No. 3 in the Harvard boat caught a crab that made it possible for the Bulldogs to go up a couple of seats. However, Yale was never able to get closer than that, and soon Harvard had worked up a length again. At the end it was an easy victory for Harvard. 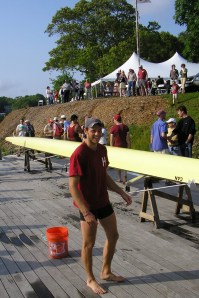 When the two Varsity boats started at 4:45 p.m. under the Golden Star Memorial Bridge for their 4-mile race, the waves were almost gone, and the sun tried to peek through the clouds. Both crews got a clean start, but it was Harvard that had a canvas lead early in the race. However, even when Harvard had almost a length’s lead, they did not manage to shake off Yale who were there with their bow, close to Harvard’s stern.

At Red Top, Harvard’s boat house, more and more people gathered on the dock to be able to see the boats when they were approaching the finish line. Across the river, close to the finish line, the famous ‘rock’ was painted red with a big white ‘H’ on it. From my little portable radio I could hear Andy Card and his co-commentator Tom Tiffany giving their experts commentates mixed in with jokes. When we finally could see the crews across the water, Harvard were several lengths ahead of Yale. The spectators at Red Top could breathe more freely.

When the crew landed at the boat house, they were met with applauds and cheers, and the sun started to shine. I managed to chat briefly with their coach, Harry Parker, who is in his 49th season with Harvard’s Varsity crew. When I asked him if he had been worried when he heard that Steve Gladstone had taken on the job as Yale’s head coach last autumn, Parker smiled and said: “Yes, we were worried as Steve is a very good coach.” He continued, “Steve is a worthy competitor”. Now, I smiled and said: “So, what do you think Steve Gladstone is going to do now?” “He will probably take in this race,” Parker answered. “And work hard to try to get the best oarsmen to his program.” “Do you have some good rowers that now can move up to the Varsity boat?” I said. Without any hesitation, Parker answered: “Yes, without doubt, as we saw today, we have some very good guys that can move up to the Varsity boat. They have been motivated all year long.”

I congratulated Harry Parker to the three victories today, before he got ready to meet his fine crew. 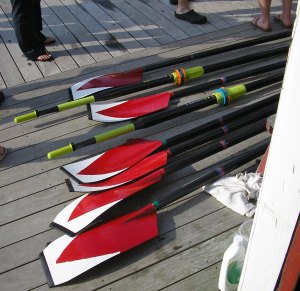 More about the Harvard-Yale Regatta tomorrow!