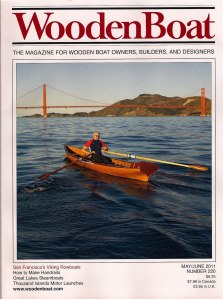 The current issue of the WoodenBoat Magazine, May/June 2011 (No. 220), has a very interesting article by Abner Kingman, “Viking and Her Descendants: Carrying forward a San Francisco rowing tradition”. The article is about the ‘pulling boat’ Viking which is owned by the Dolphin Club in Aquatic Park on San Francisco’s northern waterfront. She was build around 1900, and donated to the club in the 1930s. The article covers the story about Jeremy Fisher-Smith building some replicas of Viking in the late 1970s and the 1980s, and then in 2010.

Fascinating article! Now, run out and buy your copy!