Here Tim Koch continues his story from yesterday about his visit to Falmouth Gig Club in Cornwall.

On a very cold day shortly before Christmas I appeared unannounced at Falmouth Gig Club. Founded in 1985, it is one of the top clubs, and the women have won the World Championships ten times. I found the men’s ‘A’ crew about to go out. Their captain, Fergus Muller, invited me to join them and pointed me towards the ‘pilot’s seat’ in the bow of the gig Energy. The cox was his wife, Amelia, herself a champion rower.

All my previous rowing experience had been with fine outrigged boats with sliding seats so I was very interested to find out the differences. Like all rowing when it is done well, the crew made it look easy. Energy moved fast and true, untroubled by the choppy water of Falmouth Harbour (which, including Carrick Roads, is the third largest natural harbour in the world and a fine training ground). 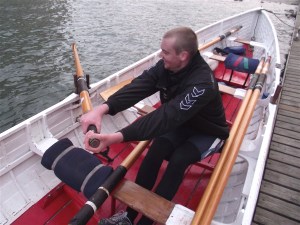 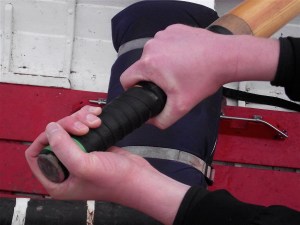 The real test came when they tolerated me taking over the bow seat for a few minutes. I was slightly overdressed in a tweed jacket and duffle coat but I slipped my brogues under the foot straps and received some quick instructions. The outside hand is held in an underhand grip and the inside hand is close to it. I was told that there was a way of using the legs at the catch despite the fixed seat but that proved too advanced for me. Against all my fine boat training, I was effectively told to ‘lean away from the work’ at the finish. Sadly, this part came easily to me. The wooden Macon oars had no button to stop them sliding through the pins and I found it difficult to keep the blade square at the catch. The result was several crabs as I (quickly) tired but at least there were no ‘boat stoppers’ or broken tholes. I soon handed back my oar and resumed my role as deadweight. 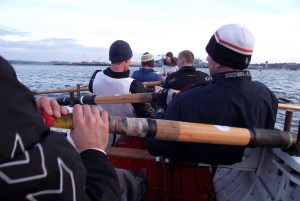 On the return leg the crew showed me a burst of speed. I had read that a very fast gig can do eight knots and I now believe it. These clinker boats may look heavy compared to a sleek plastic four or eight but they do not feel it when rowed properly. A coxswain’s eye view of a Rock Gig Club crew rowing is here. A view from the pilot’s seat of a Bristol crew rowing is here. It also shows an ‘oar toss’, used to make a quick turn.

In Britain, fine boat rowing still has an image problem because of its Oxbridge / Henley / private school connotations. Not so with gig rowing. To quote The Times, in thirty years Cornish Gig Racing has gone from ‘… a moribund sport…… to a thriving competitive pastime, claimed now to be the fastest-growing community sport in the West Country……’ Those of us who are evangelical about rowing must applaud all those who made and continue to make this happen. As they say in Cornwall when something merits approval, “Proper Job”!

Many warm thanks to Tim for a very interesting report!