I cannot really let go of the World Championships, or maybe more correctly, New Zealand. This great rowing nation had a significant impact on my rowing club in the beginning of the 1970s. This is how the story goes: In the end of the 1960s, there was no activity at my rowing club in Sweden, Malmö Roddklubb. The club did not have a functioning committee, hardly any rowers, and everything seemed to go rapidly down the pipes.

Malmö Roddklubb was founded in the late 1883 in the city of Malmö, in the south of Sweden (although, officially the rowing activities began 1 January 1884). In 1905, one of its members created a flag, with two white and two blue fields, that was used at all kinds of different club events. The flag was also on the oarsmen’s clothes when they were racing, which happened frequently.

But then in the end of the 1960s, the club was dying. This came to the attention of some old rowers who had rowed for the club in the 1950s. They decided to save the club and restart the activities again, which happened around 1971. At the 1972 Olympic rowing events in Munich, New Zealand very surprisingly took the gold in the eights (all the other gold medals in rowing went to East Germany and the Soviet Union). The committee of Malmö Roddklubb thought that the New Zealanders had the spiffiest colour ever, black, so they decided that from then on Malmö Roddklubb’s racing colours should be black and yellow (while the club’s colours should still be white and blue). Added to the black and yellow was the griffin of the City of Malmö in yellow. 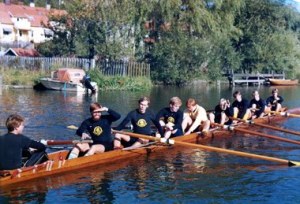 So, these were the colours my friends and I wore during regattas; photo above is from 1983, when the club eight is getting ready for the race between the cities of Kungälv and Göteborg, a 20k race. (I am not in the picture). And to this day, these are still the racing colours of the club! (See also HTBS 15 March 2010)