The Social Network may be the most recent example of films that have a small rowing connection. The now defunct ‘Tideway Slug’ has listed many here.

I recently saw a film (not on the slug’s list as it shows no images of rowing) that contains two things of aquatic note. Firstly, the only rowing song of any fame or merit, the Eton Boating Song, and, secondly, my favourite definition of Henley Regatta. 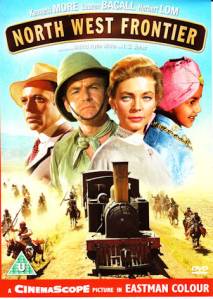 North West Frontier is a 1959 British production set in India under British rule. Typically for a film of this period, the British are either heroic (Kenneth Moore, an army captain) or lovable (Wilfrid Hyde-White playing himself, as usual) while the ‘foreigners’ are either sinister (Herbert Lom, made up to appear half Indian) or comical (I.S. Johar, who played Gupta, the faithful Indian train driver). Lauren Bacall, playing an American nanny, was excused the sinister / comical rule on account of her glamour. The plot centres around the attempt to get a young Indian Prince to safety on an old steam train while perused by rebellious tribesmen. Gupta is hurt and Moore gives him a lady’s parasol to shelter under. “Here you are old Gupta, you are ready for Henley Regatta” he jokes. Gupta is puzzled. “Please sahib (a respectful form of address for a European man), who is Henry Regatta?” Moore laughs. “It’s not a ‘who’ Gupta, it’s a ‘what’. The most sahib sahibs in England put on a lot of silly little hats and row them selves up and down a river.” Gupta is amused. “That is very funny sahib, why do they do that?” Moore is a little weary. “I’m not sure, it’s one of the things I left England to get away from… but there is a rather nice little song that goes with it…..” He proceeds to sing part of the ‘Eton Boating Song’ while getting sympathetic looks from Gupta.

You can hear an Eton College choir sing it here.

The song is ripe for parody. Most recently a satirical TV programme produced the Eton Voting Song which also contains some nice archive of the inscrutable Eton Wall Game.

If you are so inclined, a simple internet search will find many obscene versions, notably ‘The Sexual Life of a Camel’.