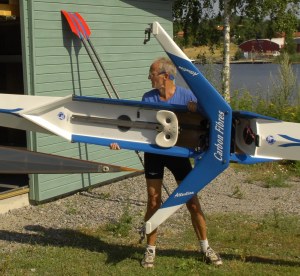 Gustav Rennerfelt, Swedish engineer and innovator, and his single scull with his one rail sliding seat, Slide-one. His Filippi single has been stored in the boathouse using Rennerfelt’s Boat Care System.

In the June issue of the Swedish rowing magazine Svensk Rodd, editor Per Ekström has an interesting article about some innovations by a Swedish engineer and MSc designer, Gustav Rennerfelt. Mr. Rennerfelt, who is a member of Lidingö Roddklubb, outside of Stockholm, sculls almost daily in the beautiful archipelago of the Swedish capital. In an e-mail, Mr. Rennerfelt writes that so far, this year, he has sculled approximately 500 kilometres in his Filippi single in which he is using his innovation the Slide-one™. This is a special sliding seat, not running on the ordinary two rails, but on one. “And having used it for about a total of 800 kilometres, it shows no sign of wear and tear,” Rennerfelt writes. 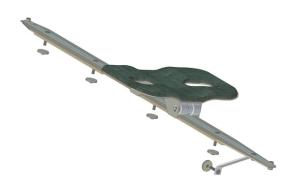 He got the idea from studying the so called mono rail used on an erg, but the Swede’s model is not as wide and he has also used other materials and designs for the wheels. After trying several prototypes, Rennerfelt now has one that he is using in his own single scull. But it is an on-going project, he mentions in an e-mail. Just a couple of days before he sent his e-mail to me, he had heard from a company producing plastic material that they were able to help him create a vacuum-formed, light sliding seat (see illustration up on the left) which will avoid discomfort for a sculler with a ‘delicate butt’. 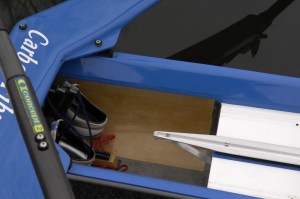 What then, are the advancements with Slide-one™? It leaves more space for the legs, which means the calves will not ‘hit’ against the rail ends; unlimited rail length allows longer oar strokes; the foot stretcher can stay in one position as rail adjustments for shorter or taller rowers are not needed if the boat is used by more than one sculler; the sliding seat is running more smoothly and silently; a special ‘lock’ for the seat makes it stay in one position when the shell is carried on land. 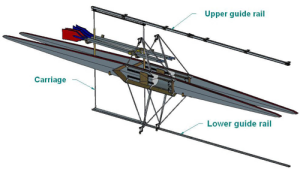 Another innovation by Gustav Rennerfelt is the Boat Care System. This is a rail system that is the most efficient way to use the space in a boat house as twice as many shells can be kept there. It also reduces damages to the boats as it is easier and more comfortable to handle the boats being taken in and out of the boat house. The pictures below show how sixteen single sculls are stored. There is only about 8 inches (0.2 metre) between the boats but they are easily and safely secured in this rail system.

The Boat Care System can also handle other boat types, double sculls, fours, and even eights. Mr. Rennerfelt’s club, Lidingö Roddklubb, is of course using his system. There is also a Kayak Care System. Both systems are produced in Sweden.

You will find more information about Slide-one™ and the Boat Care System on Gustav Rennerfelt’s web site and how to contact him. Mr. Rennerfelt is interested in finding representatives in other countries for his innovations.