Between 31 July and 5 August the annual Atlantic Water Games were held in the town of Santander in the region of Cantabria, in the north of Spain. HTBS’s special correspondent from France, Hélène Rémond, was there and she gives us this report:

This was the 16th edition of the Atlantic Water Games since it started in Brittany in 1995. Twelve European regions participate every year, among them Scotland, Wales, Cornwall, Ireland, Norte Portugal, Galicia, etc. About 400 young athletes are competing in sailing, scuba diving, surfing, kayaking and, of course, rowing! All went smoothly with nice weather conditions. I am happy to report that the region I come from in France, Brittany, ended up at the top of the podium, winning the over-all points! On second place came Cantabria, and on third, Catalonia.

You will find all the over-all results here.
For the rowing results please click here.

The rowing competitions were actually taking place in Camargo, a few kilometers from Santander.

The three girls in the single sculls received medals in their category: from left to right they represent Brittany, Aquitaine and Pays de la Loire (they were respectively 3, 1 and 2).

The four girls from Catalonia in the quadruple scull won their class and Joan-Albert interviewed them for the local ‘nautical’ radio station, 360radio. 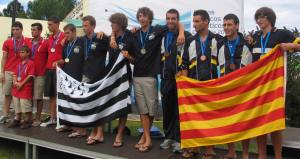 The black and white flag is the flag of Brittany, the yellow and red one is Catalonia. The boys in red are from Cantabria. 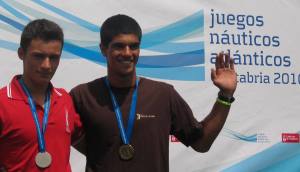 The winner in the boys’ single scull, on the right, came from Nantes, which is only an hour drive from my home town, Rennes.

Thanks to the radio reporter, Joan-Albert, I got an interview with the two guys in charge of the young rowers from Brittany, Antoine and Olivier. The Games proved to be a good experience for them. It was the first time they only had rowers under 18 years to take part in these events. They had won 1 gold medal and 2 bronze, so Antoine and Olivier were happy with the results. 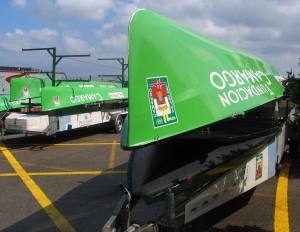 In Spain, they sometimes use traditional boats called traineras. These boats were used by fisherman in the past. There are many regattas with traineras during the summer. 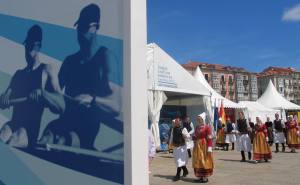 Not only are these Games giving each region a good opportunity to promote its water sports, they also offer culture events like music and dancing. People from Brittany dressed in a traditional way were performing in the Bay of Santander. There was a traditional band called Bagad that played wonderful music. And let’s not forget that gastronomy also plays an important part in these Games: you should really try the Brittany crêpes!