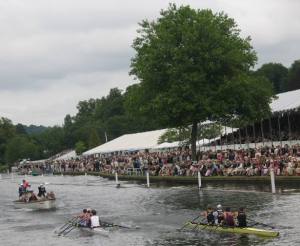 But let me start from the beginning. My dear wife asked me on Monday evening if I had had a look in The New York Times Sunday sport section if there was anything about the Henley Royal Regatta. My left eye brow probably quivered a bit when I informed her that the mentioned newspaper had dumped its ‘rowing correspondent’ a few years ago, and now never published anything on rowing, it did not matter if it was the World Championships, the FISA World Cup, or the Olympics – no rowing!

Well, today I actually took a look and there it was, a report from Henley, or that is, four (4!) long sentences under ‘Sport Briefing’. Above this section was more than a third of a page long article about ‘Competitive Eating’ (and a good sized space on the front of the sport section about this, too). You know, these competitions where you stuff your face with hot dogs, veggie dogs, hot peppers, pie, burritos, or God knows what, and you can win a lot of money. Some of these ‘sport events’ – I take it it is regarded as such as it has all this space in the sport section – are now televised and have, according to the paper, tens of thousands of onlookers who are dying to see if last year’s winner will manage to break his record by swallowing more than last year’s 68 hot dogs in buns in 10 minutes.

Disgusting! I can not understand how this gluttony can interest ‘tens of thousands’ of people. To hell with these eating contests, and long live Henley – I will see you there next year!