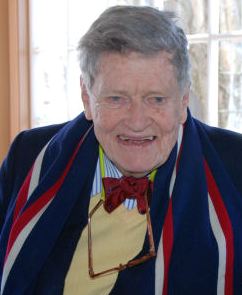 A good story that was told yesterday at the Harvard-Yale Regatta on the Thames River was the one about Samuel Hazard Gillespie Jr. The first time he saw the Harvard-Yale race was in 1922, then from his father’s yacht, Harmony. Yesterday, he was back again, now on his own boat, Venture, which acted as the judge boat at the finish line. Gillespie bought this sail boat 30 years ago, in 1980, at the age of 70. “I named her Venture because it was quite a venture at my age,” he told the New London local newspaper, The Day, in an interview the other day.

Samuel Hazard Gillespie Jr., Yale class of 1932 (and 1935 graduate of Yale Law School), who was a coxswain for Yale for three years, has now supported Yale rowing for 70 years. Ever since Gillespie bought Venture, he has sailed her from his home in Piermont, New York state, on the Hudson River up to New London to watch the race.

Gillespie is still working at the Davis Polk & Wardwell law firm in New York City, where he has worked since 1948. He has argued several cases before the U.S. Supreme Court and has served as U.S. Attorney for the Southern District of New York under the Eisenhower administration, one can read in the program of the 145th Harvard-Yale Regatta.

On 12 July 2010, Samuel Hazard Gillespie Jr., will turn 100 years young. He is expected to celebrate this with 100 relatives at the Century Club in New York. Please, allow me to say ‘Happy Birthday’ in advance!