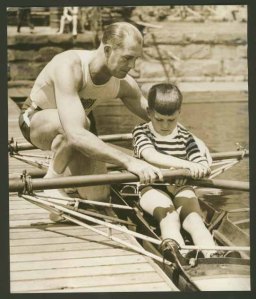 After several days of English rowing history, it might be time to throw in something about rowing across the pond. In this photograph, taken on 4 June 1935, famous oarsman Jack B. Kelly Sr., is shown giving instructions in the noble art of sculling to his son, Jack Kelly, Jr., or “Kell”. “Kell”, who was born in 1927, was 8 years old when this picture was shot. Daniel Boyne tells the story about this picture and the father’s and son’s outing on the Schuylkill River in his eminent book Kelly: A Father, A Son, An America Quest (2008).

Jack Kelly Sr., Olympic gold medalist in the single in 1920 and in the double in 1920 and 1924 (both years with his cousin Paul Costello) was never allowed to compete in the Diamonds at Henley Royal Regatta, but Jack Kelly Jr., would not only race in the Diamonds, he would actually win the cup twice, in 1947 and 1949; the latter year also becoming the European champion. He competed in four Olympic Games, in the single in 1948 London/Henley; 1952 Helsinki; 1956 Melbourne/Ballarat, and in the double in 1960 Rome. His bronze medal from November 1956, it is said, he gave to his sister Grace in a belated wedding gift as she married Prince Rainier of Monaco in April the same year.