“You recently wrote that: ‘In the mid-1920s, Beresford (Senior) had the infamous quarrel with the club’s legendary coach Steve Fairbairn, which made Fairbairn leave the club to instead coach the London RC. Decades later, this would still be remembered at Thames RC as ‘The Row’ [see 28 February].’”

Tim goes on, “A couple of interesting letters in the Auriol Kensington archive nicely marks the point at which ‘Steve’ left Thames. The attached copy of the letter to the Kensington RC Captain suggesting the establishment of a ‘Head of the River Race’ for eights is dated 27th August 1926 and is on Thames note-paper. The other letter, dated 21st September 1926 and notifying the Kensington Secretary of a meeting of interested parties, is on London note-paper.” 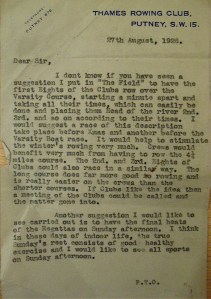 Honestly, is it not these ‘small foot notes’ in the history of rowing that makes all the difference, and why we still keep on researching and snooping around for more, good rowing stories?