Rowing historian Tim Koch of Auriol Kensington RC in London has been busy during the Holidays. He has found another photo archive with beautiful, old rowing pictures. In an e-mail, Tim writes: “I have recently discovered a delightful archive photograph site at shorpy.com They have high resolution pictures often taken from 5×7 glass plate negatives so the detail is marvellous.” Of course, he typed in ‘rowing’ in the search and came up with some great pictures.

“In these three photographs,” Tim continues, “one or two members of the crew have plasters on their stomachs. Is this rowing related? The first one also shows the famous coach James Ten Eych who took Syracuse to ten National Championships in his time at the University, 1903-1938, including this Varsity Crew of 1908. His son, Edward, coached Syracuse 1939-1946.” Ten Eych Senior, Tim writes “won the Diamond Sculls at Henley Royal in 1897, the first American to do so.”

Syracuse varsity crew team at the boathouse with coach Ten Eyck circa 1908. 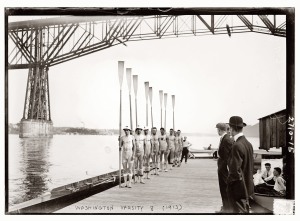 I am not sure about the plasters, but a good guess is, I think, that if you row without your shirt on, you might scratch your skin where the oar loom comes into your body. Some of the fellows in these pictures are having their plasters low. My old coach at Malmö Roddklubb in Sweden would yell his head off if we boys in the eight would pull in our oars too low. I distinctively remember him saying something about our balls…

But, over to Tim again: “This unusual shot [below] shows a thoughtful James Ten Eyck with his 1908 Freshman Crew. It is a very evocative picture and reminds me of the times I coxed a Thames Cup Crew at Henley Royal. We rented a house near the course and the crew seemed to spend most of their time eating and talking rowing. Great days.”

Syracuse freshmen on the rowing team sit around the dinner table
on June 19, 1908.