Rowing Films – Not That Hot! 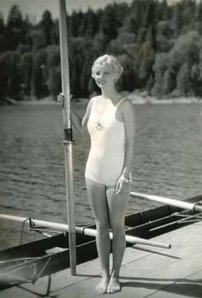 Have you watched any good rowing films lately?

You haven’t? Well, to be honest, I am not surprised as there are very few around. It seems the sport of rowing is hard to make convincing on the big screen. Most of the rowing films come out funny (when they are not suppose to be). One of the first films with rowing in it – and it is made to be funny – is College (1927) with Buster Keaton. Some years later, in 1934, Hollywood made a daring move with Eight Girls in a Boat (to the right), which was a remake of a German film from 1932.

MGM’s first British production was A Yank at Oxford (1938) starring Robert Taylor as an American student at Oxford. Taylor strokes his college’s eight (to the left) at bump races and at the end of the film, Oxford’s boat in the Boat Race against Cambridge. Other famous stars, or stars to be, in this film were Maureen O’Sullivan (leaving Johnny Weissmuller’s Tarzan alone in the jungle) and Vivien Leigh (before her success with Gone With The Wind).

To watch Robert Taylor win the Boat Race, please go to: www.youtube.com search for A Yank at Oxford (part 9).

In 1984, a terrible remake of A Yank at Oxford was done, Oxford Blues, with Rob Lowe. Please do not waste any time watching it.

It seems that making a documentary about rowing is easier to do than a fictional story. Although some of the worst ones are based on rowing “history” books, for example the film Rowing Through is based on the great book The Amateurs and the film True Blue is based on the book with the same title. (For some unknown reason True Blue was called Miracle at Oxford in America.)