How much did you say?

When I began collecting rowing books years ago, no antiquarian book dealers posted their books on sites on the internet, mainly because the was no internet to post them on. Instead, I had to call or visit the dealers to see if I could find anything “new”. Of course, it was when I visited England that I was able to make the best finds, especially in London, Oxford, and Henley-on-Thames. Richard Way Bookseller on Friday Street in Henley had shelves after shelves with new and out-of-print books on rowing, and for certain, I would find several books there that I did not already have.

Here I found, for example, Alison Gill’s hard to come by The Yanks at Oxford (1991), Steve Fairbairn’s autobiography Fairbairn of Jesus (1931), and Edmond Warre’s On the Grammar of Rowing (1st edition published in 1909, and the 2nd published in 1990 by Richard Way Bookseller). Even today, Richard Way Bookseller is the bookshop to first contact if you are looking for new or out-of-print books on rowing. To contact the bookshop, send an e-mail to: waybooks@btconnect.com

Nowadays, the internet has made it easier to find copies of rowing books that are carried by book dealers around the world. Although, be ware, there are traps and pitfalls to look out for. Some, so called “booksellers”, forget to state the condition of a book, or even which year it was printed, or which edition/printing the book is. Sometimes the reason for this is that they physically do not have the book on their own shelves – if they have any bookshelves at all. Instead, these “megalisters,” as they are called, have employees who scan other booksellers’ sites, and list their books on their own site. This way they can stock millions of books that they do not have. If they would get an order, they order it from the other dealer, making a little money on each copy by charging more for shipping. Mike Sussman wrote a good article, “Attack of the Megalisters,” about the “megalisters” in the New York Times Book Review on 14 September 2008.

In my hunt for rowing books, I visit online marketplaces for books several times a week, especially AbeBooks.com – which claims to have thousands of booksellers around the world linked to their site. These booksellers offer “110 million new, used, rare, and out-of-print books”. AbeBooks, with headquarters in Victoria, British Columbia, Canada, was acquired by Amazon.com on 1 December 2008. 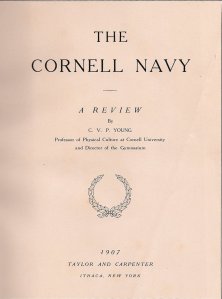 What I like about AbeBooks is that it is easy to find what is out there. I can search for books by author, title, subject, or ISBN. I can also choose to have the list show only first editions, hard cover copies, or convert the prices into Swedish kronor, Pound Sterling, or Japanese yen.

More than a year ago, when I was searching for some special books, I happened to click on the wrong button on AbeBooks. Instead of getting the newly posted rowing books, I got the most expensive ones. To my astonishment I found that a bookseller in Portland, Oregon – this beautiful town of books – was offering C.V.P. Young’s The Cornell Navy: 1871-1906 – A Review for US$50,000 (yes – a 5 followed by four zeros: US$50,000!). Young’s book, from 1907, in red cloth with two crossed oars as decorations on the cover, has 71 pages and many nice photographs as illustrations. Young, professor of “Physical Culture at Cornell University and Director of the Gymnasium,” had dedicated the book to Cornell’s head coach at the time, Charles Courtney, to all rowing Cornellians known as, the “Old Man”. Courtney was a very successful amateur sculler and rower, and, later, is also to be regarded as one of America’s most prominent professional scullers, who, after his career as a professional rower, became a famous coach for Cornell Navy. 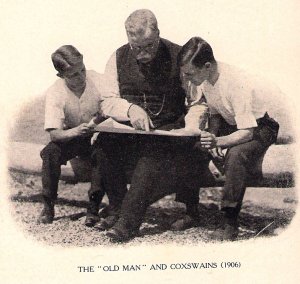 Although the bookseller in Portland claims that The Cornell Navy: 1871-1906 – A Review is “an extremely rare, exceedingly difficult to find title”, and the book is in a “very good plus” condition, it is hard to justify the US$50,000 he wants for it. Can it really be worth that much money? The answer, of course, is that it is – as with all books – worth as much as a buyer is willing to pay for it. And that is probably not US$50,000. About three years ago, I saw this book posted by another seller on AbeBooks for a little over US$2,000, and already then, I thought it was an absurd price.

These days there is actually a new phenomenon that has risen on the horizon, print-on-demand. Hang on you say, that is not new, it has been around for more than a decade, which is true. However, the “new” thing is that “publishers” have started to re-publish old books, also rowing books, which have “lost” their copyright, and therefore can be reprinted without paying a royalty to the long-since passed author. And that is done the print-on-demand way, meaning you print a few copies after you have received the orders. Copies of The Cornell Navy: 1871-1906 – A Review are now being offered this way on AbeBooks.com for as low as US$22 – of course making the US$50,000 even more ridiculous.

Whether you are willing to pay US$2,000 or US$50,000 for Young’s book, I got my copy – an original one from 1907 – for much less at a bookseller in Rhode Island. The copy I found was in a much poorer condition than the one out in Portland. Maybe a bookseller would have called it “fair”, with a faded cover, some wrinkled pages, some pages being water damaged, a hole in one page, and a tear in another. So, how much did I pay? The book had no price, so I asked the bookseller, he said US$75. I said that I did not have US$75, nor was I willing to pay that much. I said he could have the US$25 I had in my wallet. The bookseller smiled and said: “Okay”.