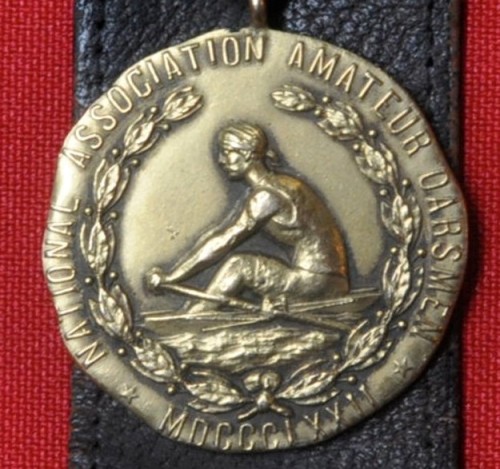 For the HTBS show-and-tell series, John R. Schoonover has picked a 1920 Navy medal he won on eBay. 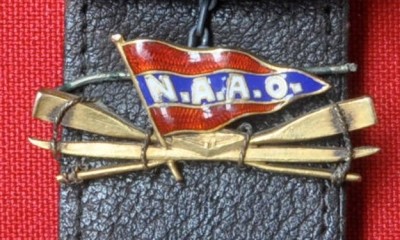 In the early days of eBay, I acquired a handful of rowing medals of various sizes and vintage. The most handsomely embossed, replete with a small leather hanging strap and N.A.A.O pin, is engraved on the reverse:

Once only an attractive souvenir acknowledging a prized victory a century ago, this medal opens a fascinating chapter in the annuals of rowing history. A former and current (The St. Andrew’s School Alumni 8) coxswain myself, I initially researched Cadet Rothwell, but he is not listed on the recently installed plaques at the Naval Academy listing oarsmen who received a “varsity letter” in the early 1920s. However, among those whose names appear is the crew of the 1920 Olympic gold medal 8 for the Games held in Antwerp, Belgium.

Unbeknownst to me, Navy’s travails and triumphs leading to Antwerp parallel another remarkable Olympic story compellingly written by Dan Brown in The Boys in the Boat. Navy’s similar story is wonderfully told by Susan Saint Sing in the book The Wonder Crew, published in 2008. 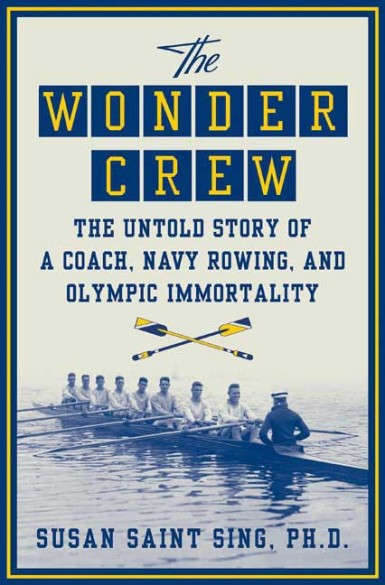 Great Britain had dominated rowing at both the 1908 and 1912 Olympics, proceeding Vesper’s golds in 1900 and 1904. Navy’s astounding victory in a record time of 6:05 (0.8 sec. ahead of Leander) initiated a span of 44 years of U.S. dominance of the men’s Olympic 8, including, obviously, the great University of Washington Huskies crew in 1936.

Navy’s coach, Richard Glendon, was a hardscrabble kid who took up rowing while a young seaman at the Boston wharfs. He eased into coaching, eventually landing at The Academy in 1904. Among the many midshipmen he coached was a cadet, Chester Nimitz, stroke of the 1905 crew. During WWII he was appointed Fleet Admiral of the United States Navy.

My search for a 1920 N.A.A.O. Regatta Program was quasi-successful (Tom Weil has one buried in his archives). At the N.A.A.O. Regatta, Navy defeated Ted Van Dyck’s favored Syracuse Chargers by seven feet of open water in a then record time of 6:20 to gain the Olympic berth.

The New York Times reported that the Navy “second crew” finished fourth. Interestingly, Susan’s Sing’s book states that the Navy “intermediate crew” finished third. Whatever, I’m not sure either rates a gold medal, but it does lead to some confusion yet to be resolved. How did young Rothwell earn his medal? I should note that among the other qualifiers at the Trials was Jack Kelly Sr., who won both the single and double sculls events. He subsequently triumphed in Antwerp after having been snubbed by Henley Royal Regatta. That’s a whole other story. Meanwhile, I’ll track down that elusive 1920 N.A.A.O. Program and return with an update on the Navy J.V. 8.