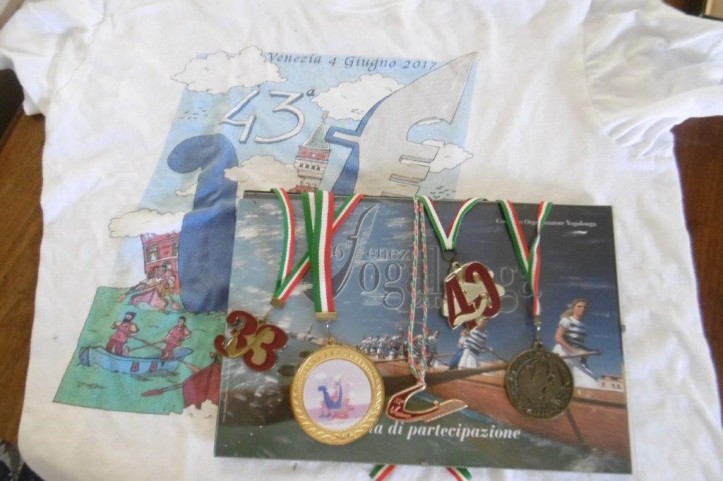 In this article, in the HTBS show-and-tell series, Larry Fogelberg writes about a medal handed out to those who participate in the famous regatta Vogalonga, Venice.

A medal of participation is, of course, nothing much to brag about, not even five of them. But since the Vogalonga in Venice has hardly been mentioned on HTBS, showing mine is an excuse to say something about the regatta.

The Vogalonga is not a race. It started in 1975 as a local protest against the increasing use of motor boats, which created waves attacking the foundations of the buildings in the canals. It is questionable if the protest had much influence, but the regatta – open to any muscle-powered vessel – quickly attracted international participation. Now on Ascension Day, motor traffic is suspended until the middle of the afternoon, while 1,500 or more boats of every sort start at 9 a.m. near the Doge’s palace. I compare the start to that of a big city marathon. Eventually things get sorted out, but for a while it is a little hectic, the big and small, faster and slower all jumbled together.

The ca. 30 km (ca 19 miles) course takes vessels out into the lagoon on the way to Burano, around Burano back to the lagoon for a long stretch to Murano and through its canal. From there, the course goes back to Venice, where there is usually a traffic jam, since all the boats are entering the canal under a narrow bridge that can only allow one vessel at a time. The rest of the course, through that canal and back in the Canale Grande, is then like stop-and-go traffic, a challenge to coxes. At the start/finish line, plastic bags with a medal, certificate and t-shirt for each participant are tossed into the boat.

All the Venetian rowers look down on the rest of the participants – and perhaps not just literally, standing in their various types of boats for one, two, four… up to 18 rowers. They are, however, hospitable, clubs letting foreign crews use their facilities. Down on the water with our sweeps or sculls, we have to contend with the greater maneuverability of the smaller boats.

And then all the other craft: kayaks, canoes, even pedal driven boats, plus the dragon boats. I believe that most of us on HTBS have an opinion about dragon boats. Mine was confirmed as our quad entered the bridge and the prow of a dragon boat lifted my rudder off its pins. I hauled it aboard and warned the crew that steering would be by command. We had no problem getting to the finish line, but we still had an hour’s row to our landing, six hours or more on the water. If you are wondering, at Burano there are possibilities to stop at the mudflats or a dock to spend a penny.

Venice is always a pleasure, so I look forward to adding another Medaglia di Partecipazione to those that hang in our guest WC.

In a 2012 post with Philip Kuepper’s poem “The Vogalonga” is a nice six-minute promotion video.

Of course, there are many other, longer videos about Vogalonga on the web.