The Other Parts of Rowing (TOPOR) VI – Dancing the Highwater Fling

Rowing qua rowing is to most HTBS Types the act of attempting to achieve symphony in motion in a competitive context. But even that core act takes place within a smorgasbord of other activities. This, another in HTBS’s Dry Season Bottom-of-the-Barrel Series, is the sixth in a mini-series illustrating some of those other elements of rowing, as depicted by several decades of randomly collected news photos, images that demonstrate the insatiable appetite of the popular press at a time when journalism was interested not just in the act of rowing itself, but also in the bits and pieces that make up the greater tapestry of the sport.

Celebration or revenge? For decades now, through this entertaining ritual, those who do all the work have been able to reveal their true feelings towards the one who, while lounging in the stern and taking in the scenery, berates them for not working hard enough. Worth noting in this early post-war shot is that it was still not customary to wear one’s crew shirt while racing, that a heavyweight varsity crew was not yet heavy enough to sink the edge of the float when effecting their toss, and that their unrestrained delight in the sendoff was matched only by the sense of apprehension etched on the face of the figure in flight, who is demonstrating the classic 110-degree-legs-split-with-a-twist-facing-the-water form. 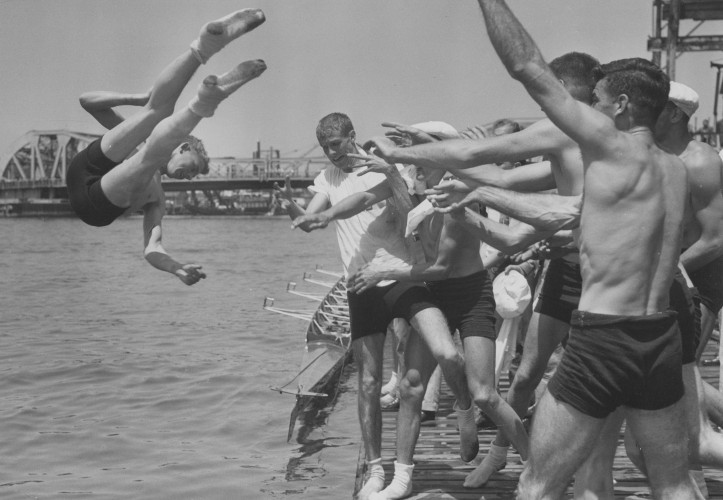 [April 5, 1948] Here, celebrating their victory over arch-rival Washington, the California varsity, the prospective Olympic gold medal eight, fling their coxswain, Charles McCarthy (who was not a member of that Olympic eight), into the ether. Here, McCarthy elects to utilize the parallel-legs-with-a-twist-facing-the-water style accompanied by a smile for extra points.

It should first be noted that Purchase was the returning cox of the 1948 Olympic gold medal eight pictured above. It should also be noted that the caption is erroneous in stating that he was “leading” the crew to victory, because, as everybody knows (and as is clearly obvious to the most challenged simpleton looking at a coxed crew underway), unless the boat is bow-loaded, coxswains do not lead, but only follow their crew, whether to victory or defeat.  Purchase here reveals his mastery of the 120-degree-legs-split-semi-layout position. Poorly written captions can make one quite sic [sic], but the power of this image demands that it be displayed. First, note that the white object to the right of the photo would appear to be the headdress of the stroke, who, while executing a beautiful vertical torso entry to the Thames, is about to suffer a major reduction in his dive points total due to his flopped over legs placement and the loss of a portion of his clothing. In the meantime, the cox, partially obscured behind the stroke (which is the cox’s normal position), is completely countering the stroke’s style by displaying perfect vertical leg extension coupled with a cannonball-back-and-butt presentation to the water’s surface. Finally, the rapt attention of the massed spectators within spitting distance on the bank evidences the fascination of Henley-goers with all aspects of American rowing traditions. Words are important. We pause here to consider the appropriate terminology for the act of sending the coxswain aloft. Of the four captioned wire photos shown so far, the term “toss” or “tossing” appears three times, and the term “heave ho” twice. (On no occasion are any of those performing the launching act referred to as “tossers”, which might elicit a quite unfavorable reaction.) Schwarz here demonstrates an almost perfect full-supine-layout-with-wingspread-arms style. One can measure the power of the throw through the Newtonian principle “for every action, there is an equal and opposite reaction” – if the launch force is such that, as here, the float becomes partially submerged in the process, one would hope that it would produce the extended hang time which would permit the coxswain to execute the most entertaining of flight performances. Except for the individual at far left, every member of the launch team seems to be comfortably maintaining their balance on the platform, but the term “flipped” raises significant questions of procedure and etiquette, which are only compounded by the utterly disorganized water entry. Was De Gurse just summarily shoved? Was he given any opportunity to achieve form at altitude? Are any answers to be found when one recognizes, grinning suspiciously in the midst of the scrum (third from right), Penn crew member Harry Parker … ? Much scarcer than images of the cox in flight are those captured prior to take-off. This photo reveals both the positioning of the launch team, and the placement of grips on the coxswain’s body. A crew of four, while having to handle twice the cox weight per member that a crew of eight must deal with, has the advantage of being able to swing the body further back and with less interference than can be effected by eight men clustered around the cox, and thereby achieve a more perfect and elegant trajectory in the throw.

[April 14, 1973] That no caption accompanies this copy of a wire photo does little to detract from the significance of the image. The picture appears to have been taken at a regatta in Florida in the early 1970s, with the crew being college freshmen (note lettering on chest – F I T? / Crew / Frosh). The person being tossed appears to be a young woman, and she appears to be wearing the same uniform shirt as the men on the launch squad (note the dark band on the end of the T-shirt sleeve). It is most likely that the subject of the toss was the coxswain of that crew, which would make her one of the earlier female coxswains of a collegiate men’s crew in the modern age. That there would appear to have been no hesitation regarding the propriety of treating a young woman in this manner suggests either that the gender gap had been comfortably bridged on this team or that this team had no concept of how to treat a lady to begin with. And her easy embrace of the classic 110-degree-legs-split-with-a-half-twist might indicate that this was not her first time at the coxswain-tossing rodeo. Here, for a change of perspective, is (a) a women’s crew (b) carrying a man (c) who is not their cox, but (d) their coach. One may well wonder what height Mr. Baker gained and what distance from the dock he traveled, but one need not doubt the high spirits in which this twist on the traditional practice is being carried out. Adding to the variations by which to label this ritual are three references to “dunking” and one to “throw” in the last couple of captions. Taken at the moment of release, this example of being “tossed” provides a perfect example of everything a traditional coxswain launch is not. The subject in no way fits the ideal size profile of a coxswain, and the projected trajectory of his journey may not be measurable – the most notable aspect of his flight is likely to be the enormity of the splash that his corpulent body makes when it hits the water. The most impressive element of the picture is the extent to which the combination of the weight of the crew and the weight of the coxswain, and the resulting throw dynamics have depressed the float to the point of causing a mini-tsunami.

Pity the poor coxswain. Diminutive in stature and diminished in gravitas, while his/her presence continues to be required in the high school and collegiate realms of fours and eights, he/she has almost no role now at the highest levels of competition on the international stage (of the 48 competitors that would constitute a complete rowing team at the 2020 – now 2021 –  Games, only two would be coxswains). But so long as the custom of the most exciting post-race tradition in rowing continues to be practiced, coxswains are guaranteed to make the biggest splash after attaining the height of visibility at the center of attention. Per aspera ad astra!