Tim Koch is pleased to find that he is not very different from an elite athlete.

I have always been attracted to Homer Simpson’s philosophy that ‘Trying is the first step towards failure’. This could be one of the many reasons why my rowing career was less than glittering. Perhaps things would have been different if a new book that looks at ‘the psychology of elite sport through a mixture of academic theories and interviews with Olympians and other professional sports people’ was available when I was struggling with a wooden Macon.

Mind Games – Determination, Doubt and Lucky Socks: An Insider’s Guide to the Psychology of Elite Athletes, is published by Bloomsbury Sport and is written by Annabel ‘Annie’ Vernon, someone well qualified to write on elite sport. She joined GB Rowing’s ‘World Class Start Programme’ in 2002 and rowed for Cambridge in the 2003 Women’s Boat Race. Her first GB vest came in 2004 when she won a bronze medal in the pair at the World U23 Championships. She joined the senior national squad in 2005 and won Gold in the double at the 2006 Munich World Cup and in the quad at the 2007 and 2010 World Championships. At the 2008 Beijing Olympics, Annie, Debbie Flood, Frances Houghton and Katherine Grainger won Silver in the quad, actually an enormous disappointment as they had a realistic expectation of Gold (which would have been the first for GB women’s rowing) and had led for most of the final.

In an interview in this month’s Rowing & Regatta magazine, Annie says of the Beijing race:

I put it into perspective after a year…. In 2010, I was in the quad and we won the World Champs and had our best ever row. I was sated, I was done. But the book has been part of the healing process and a form of redemption. 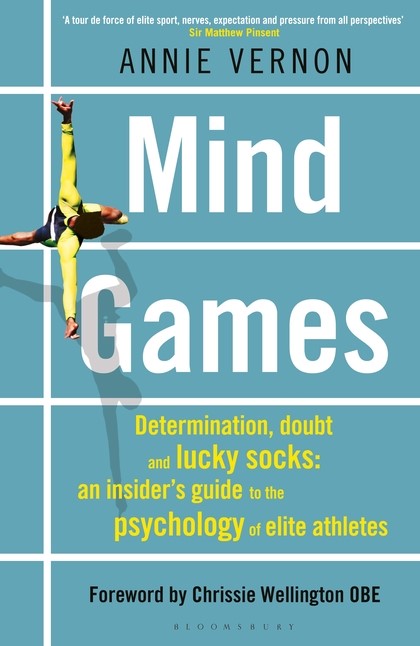 I have not (yet) read the book, but the publishers tell us:

It is well known that to reach the top in elite sport, you need to have spent years honing and perfecting your physical ability. However, this is only part of the template required to win – the other half is about “mind games”.

Throughout her career as one of the world’s top athletes, Annie Vernon struggled with existential questions about the purpose of sport in our comfortable, first-world society: Why do we do it? What is it in our psyche that makes us push ourselves to the limit? What allows us to overcome mentally the physical pain?

Now retired from competition, Annie Vernon has decided to look for answers to these questions. Drawing on her personal experiences and interviews with some of the best coaches, athletes and psychologists from across the world of sport – including Katherine Grainger and Matthew Pinsent – Annie discovers the secrets of how athletes train their brains in order to become world-beaters.

Annie debunks the myth that elite performers are universally cool, calm and brimming with self-assurance. Through exploring the bits on the inside that nobody can see, Annie instead creates a new understanding of what it takes to be successful in sport and uncovers that, in fact, an elite athlete is not that different from you and me. It’s simply a question of mind games!

It’s from a research paper called ‘The Rocky Road to the Top: why talent needs trauma’ and is about the influence of setbacks on character. Research shows that resilience is a greater indicator of success than talent.

The Guardian of 18 April has a splendid part review, part interview with Donald McRae, who picks out some revealing insights such as the one concerning Matthew Pinsent:

[Pinsent] who won rowing gold at four successive Olympic Games, told Vernon that, rather being an unflappable serial winner, he used to wish the van driving him to every major race would crash so he could escape competing….

McRae asked Vernon why she did not focus more on gender:

“We ran out of space,” she says with winning honesty. “In my first iteration of the book, gender was a whole chapter because it’s really interesting. In rowing, the men and women train alongside each other so you get to see from the outside how female and male crews do things differently.”

In another good piece in the Irish sports website, The 42, the interviewer puts an interesting question:

You also touch on the idea of some elite athletes not even liking their sport. It’s something they’ll rarely admit publicly. How common do you think it is?

I think it’s really common. One of my friends joking says: ‘High-achieving people confuse misery and pleasure.’ I think there is some truth in that. The success becomes a real driver and the sport is so intense and demands so much from you that you have that love-hate relationship with it. Is it a bit like being in an abusive relationship? Probably…. I don’t think I can say: ‘I loved rowing,’ or ‘I hated rowing.’ At times, I loved it. At times, I resented it for being this vehicle that demanded so much from me. But I loved the feeling of rowing and the feeling of being in a really fast crew, but that’s quite a small part of the overall picture.

On Tuesday, 7 May, Annie is ‘in conversation’ about her book with her former cremate, Debbie Flood, at Leander Club in Henley-on-Thames. There is a two-course set supper at 6.30 for 7.00 pm, followed by a talk and discussion. Priority is given to Leander members, but others are welcome if space permits. To book, contact the Leander Club office on 01491 575782 or e-mail events@leander.co.uk  Copies of Mind Games will be available for sale on the night for £15 (cash only).