In July 2017, successful Swedish rower Ebba Einarsson, then 17, was suddenly struck by a rare illness, overnight she got paralyzed from the waist down. Nevertheless, Ebba is a mentally strong person and on 9 September she will be the first person to represent her country in a para event, in the Para 1 single sculls at the World Championships in Plovdid, Bulgaria. HTBS contacted her to ask her some questions before she left for the championships.

Ebba Einarsson began to row when she was nine years old at Falkenbergs Roddklubb in the small town of Falkenberg, located on the west coast of southern Sweden. The rowing club, which is situated by the River Ätran, is known for its large programme for children, youths and juniors. Ebba joining the club might also have had something to do with her father, Johan, who is an old rower. At age 14, Ebba took her first gold medal at the Swedish Junior Championships, a year later she was a member of the Swedish junior national team and among her successes was a silver medal at the Nordic Junior Championships in the quadruple sculls. She seemed to have a bright future in the sport she loved. Ebba even started to dream about competing at the Olympics.

Then things took a nasty turn.

In July 2017, Ebba, age 17, took a gold medal at the Swedish National Sprint Championships in the quadruple sculls. A week after the championships, Ebba came home from work feeling tired, her legs were aching, and her back was hurting. She went to bed but could not sleep. The pain grew worse. Ebba tried to stand up, but her legs were all numb. She phoned her father, who came and carried her out to his car and drove her off to the hospital. There, the doctors examined Ebba but could not determine what had caused her to be paralyzed. Four days later, Ebba and her parents, Louise and Johan, met some specialists in Gothenburg. They concluded that blood vessels in Ebba’s back had broken. The bleeding in the spine had made her completely paralyzed from the waist and down. The doctors told Ebba she would live the rest of her life in a wheelchair. It is a rare illness, which can affect one to two people out of one million.

‘I don’t think I will ever accept to spend the rest of my life like this,’ Ebba said in an interview for a Swedish TV programme.

‘As a dad, you don’t really buy that,’ Ebba’s father Johan said in the same programme. ‘When the doctors said that there was no hope, we tried to find help abroad. But everyone said that we had to wait to see how her body was handling this. It’s terribly difficult to go in at the spine to do surgery. One mistake and you can get paralyzed further up.’ Johan continued, ‘We can fly to the moon and transplant hearts, but this we can’t do anything about. I don’t buy it.’

After some time at the hospital and a rehabilitation centre, Ebba came home to her parents’ house. The house had to be remodeled to suit Ebba in a wheelchair. It was hard at first for Ebba, who is a strong, independent young woman. ‘I really didn’t want to be a nuisance,’ Ebba said. Her parents’ house had a small flat that Ebba moved into. A Swedish TV programme called Sofias Änglar [‘Sofia’s Angels’] did a story on Ebba and came to re-model the flat for Ebba’s needs.

To get some exercise, Ebba started to swim. As she is not capable of doing anything half-hearted, in July, Ebba swam Sweden’s classic open swimming event, Vansbrosimningen, a 3,000-metre course under seven bridges over the rivers Vanån and Västerdalälven in the province of Dalecarlia.

But how about the rowing? During her recovery time, Ebba told a Swedish newspaper: ‘I don’t care about walking, but I want to row again.’ Ebba told the story to Worldrowing.com when she was interviewed last May for the 2018 Para International Regatta in Gavirate, Italy. Earlier in the spring, Ebba had gone to Norway to train with Birgit Skarstein, the reigning world champion in the Para 1 single sculls. 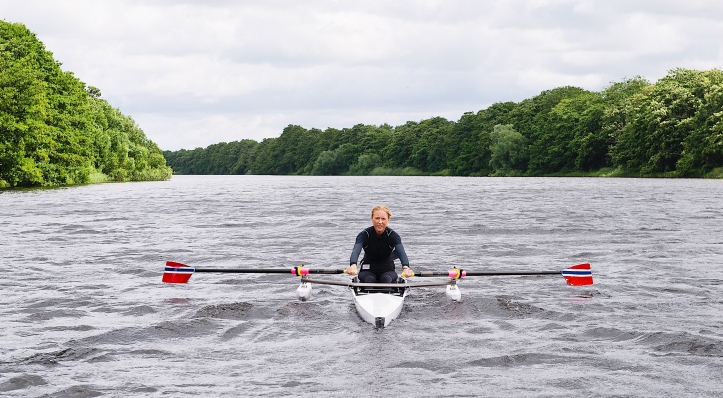 How did it go at Gavirate after only training in the para single for a few weeks? Ebba ended up in sixth place out of seven entries. Sylvia Pille-Steppart of Germany won, but it made Ebba want even more. At the Swedish Championships in August, where there are no para events, Ebba steered Falkenberg’s women’s eight to a gold medal and the club’s men’ eight to a silver.

The World Championships in Plovdid, Bulgaria, starts on 9 September. Ebba will be there together with a small team from Sweden. This will be the first time she will compete in a para race at a World Championship event. Before leaving Sweden, Ebba was kind enough to answer some questions HTBS sent to her.

HTBS: How do you feel, Ebba, any bad racing nerves?

Ebba: Surprisingly, no, I usually worry days, weeks or even months before a competition, but this time I don’t have that pressure on myself. I’m going to Plovdiv as a new member of both the para and senior rowing world. This is my year to just experience, learn and have fun and collect motivation. I’m not there to take any medals. Though, I’m convinced that some nerves will come to play with the arrival and the hours just before the race, but that’s a good nervousness, which I will use as adrenaline during the race.

HTBS: Have you been practicing a lot for these championships?

Ebba: My summer has consisted of training in all different forms, not just rowing. Swimming, SkiErg, cycling, rolling and weights. All to get the variation and alternative training. I already use the same muscle groups in everything I do, which makes the variation important. Though, this is a new world with different adaptions and I’m just like a newborn. I need time to figure out what training that works for my body to get the most out of the rowing. So, I’m still in a beginning phase.

HTBS: You are fairly new at racing in the Para 1 single scull. What is the major difference, do you think, between rowing in this boat class and a non-para single scull?

Ebba: The physical difference is within the boat. My para boat is shorter, wider and has one pontoon on each side. When I first got back in the boat, in the Czech Republic in April this year, I didn’t like it at all. I got sad, angry and frustrated. I was there alone as a para rower with the Swedish national team. The first time going out on the water was pretty emotional. I didn’t feel that I could find the same rhythm and flow that I used to love. But I decided to give it a second chance at FISAs training camp for para athletes in Gavirate, Italy. This camp ended with a competition the final weekend. It was then it all came back to me: the feeling out on the lanes, competing, the movement, the judges, the finish line, everything was the same as before and this was the first time I didn’t think about my injury. It was an amazing feeling and made me realize I am just the same person, I can do exactly what I want just in another way.

HTBS: How many para rowers are there in Sweden?

Ebba: There are no other para rowers in Sweden and have never been. I am the first one which makes it very special. It’s hard sometimes when we are all beginners as a para athlete, but I have the background of rowing and know what I want to aim for, which, I believe, is a huge advantage.

HTBS: You have been training together with Birgit Skarstein. What did that teach you?

Ebba: Birgit is my biggest role model. She is like me and has found a love within the sport just as I have. But the real beauty in para rowing is that we all have different injuries, history and ‘luggage’, but when we are at the start, we’re there on the same conditions. Birgit is the world’s best para rower and breaks even her own world record. She rows in a fantastic way that makes it seem effortless. I have so much to learn from her as she is years ahead of me. I want to take the good pieces from her and adapt them to fit me.

HTBS: At the championships in Plovdid, do you see yourself in the A final, maybe even ending up on the podium?

Ebba: I’m going to Plovdiv with no expectations. I will be just as happy ending up last in the B-final, as if I’m ending up on the podium – as long as I know I did my best, I will be happy with my performance. This is my first year, and it’s a year to learn and experience. I don’t have to be the best right now, but I will do my best. 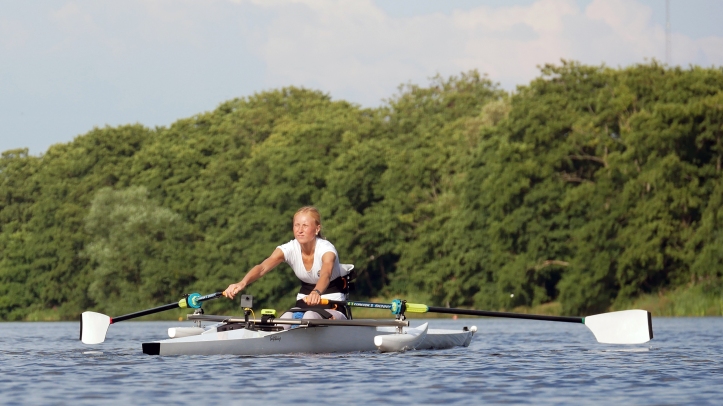 HTBS: You once dreamed of competing at the Olympics. Is your dream now to compete at the Paralympics in Tokyo in 2020?

Ebba: Last year my body and my abilities changed, but one thing that has never changed is my goals. I want to walk the same way as before, but this time, it just has taken another turn and started rolling, though the destination is just the same as before. And that is, like I believe every athlete’s biggest dream is, to participate in the Olympic Games.

HTBS: You have gone through a tough time to say the least. Where do you get your strength? And what would you like to tell other young people who have been struck with illnesses, accidents or life changing ordeals?

Ebba: My mom asked me just this very question, when she went through this tough time. ‘How can you be so strong?’ And I answered her, ‘Mom, what choice do I really have? I can either lie down, hide and cry or I can sit straight up in my chair with an attitude and do the best of it’. That’s just what I want to do, the best of it and make others realize what life really is about. To make people see me as a person rather than a girl in a chair. I’m right here and can do everything that everyone else can do, I will just do it in another way. Find yourself, love yourself and find others to share the love with. People will love you as a person and not after your abilities.

HTBS: Good luck at the world championships, Ebba, and thank you for taking the time to answer these questions.

Ebba: Thank you, it was a pleasure.