How to Prove you are an Englishman in a War 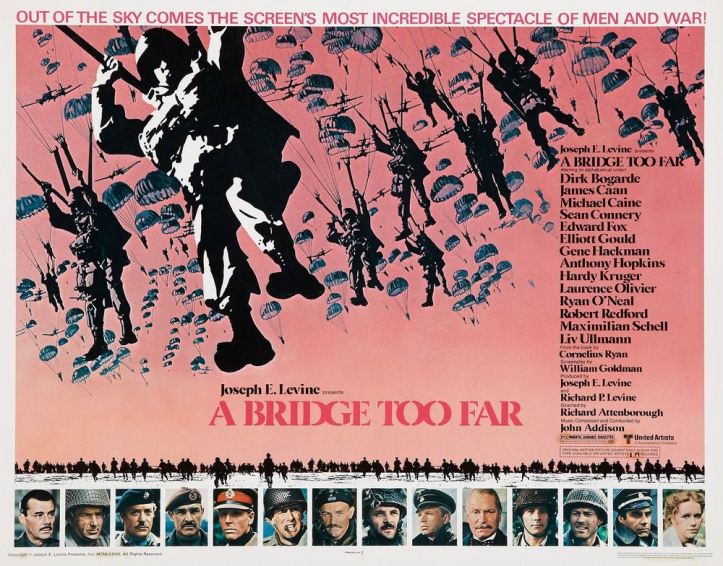 Göran R Buckhorn has looked into what makes an Englishman at war.

On my list of the Top 10 War Movies is A Bridge Too Far, which was produced by Joseph E. Levine and Richard P. Levine and directed by Richard Attenborough. The film, released in 1977, is based on Cornelius Ryan’s book of the same name which was published in 1974. The book/film tells the story of Operation Market Garden – the largest airborne operation up to that date in World War II – launched by the Allies in September 1944 to break through German lines and seize nine important bridges in the occupied Netherlands, including the one at the city of Arnhem over the Rhine River. By seizing the bridge at Arnhem, the Allies would be able to cross the border to Germany to attack the German industry in the Ruhr area.

With Operation Market Garden, the Allies expected the war to end by Christmas 1944. However, the operation became almost a total fiasco, as the Allies met harder resistance than they anticipated, especially at Arnhem. Although, the operation failed, the creator of the operation, British Field Marshal Bernard Montgomery, ‘Monty’, regarded it as a 90 per cent success – many soldiers and war historians would argue against this. To this day, the operation is controversial.

It was first when Cornelius Ryan, an Irish journalist and writer (who became a naturalized citizen of the United States in 1951), published A Bridge Too Far that the ill-fated operation came into a different light. Ryan got the name of the book from a comment that British Lieutenant General Frederick Browning is said to have uttered to Montgomery, ‘I think we may be going a bridge too far’ (meaning the bridge at Arnhem).

The film has an all-star cast with many memorable performances, among them Anthony Hopkins as Lieutenant Colonel John ‘Johnny’ Frost (later Major-General), CO, 2nd Parachute Battalion, 1st Parachute Brigade, 1st British Airborne Division, who, with his men, manage to get to the bridge in Arnhem. There, they get pinned down on the north side of the bridge. Among his men, in the film, is Major Harry Carlyle (played by Christopher Good), an eccentric soldier who is carrying around an umbrella, with which he leads an attack against German soldiers. At the end of this long movie, Frost is lightly wounded in his leg, while Carlyle is fatally wounded. At 2:23:33, there is a scene when Frost asks Carlyle a question about his umbrella. This is how the conversation goes:

Frost: ‘But why the hell do you always carry that bloody umbrella?’

Carlyle: ‘Bad memory… [he struggles to talk] Always forgot the password. I knew no “Jerry” would ever carry one [he struggles to get his words out]. I had to prove I was an Englishman….’ [dies]

It might seem a little over the top to portray Major Carlyle carrying around a rolled umbrella in the mist of a battle, so was Carlyle just a made-up character in the film to add an extra flair of English eccentricity?

During the battle [at Arnhem], Digby wore his red beret instead of a helmet and waved his umbrella while walking about the defences despite heavy mortar fire. When the Germans started using tanks to cross the bridge, Digby led a bayonet charge against them wearing a bowler hat. He later disabled a German armoured car with his umbrella, incapacitating the driver by shoving the umbrella through the car’s observational slit and poking the driver in the eye.

Digby then noticed the chaplain pinned down by enemy fire while trying to cross the street to get to injured soldiers. Digby got to him and said ‘Don’t worry about the bullets, I’ve got an umbrella’. He then escorted the chaplain across the street under his umbrella. When he returned to the front line, one of his fellow officers said about his umbrella that ‘that thing won’t do you any good’, to which Digby replied ‘Oh my goodness Pat, but what if it rains?’

After Tatham-Warter had graduated from Sandhurst with the rank of second lieutenant in January 1937, he was commissioned into the Unattached List of the Indian Army. Tatham-Warter was attached to the 2nd Battalion, Oxfordshire and Buckinghamshire Light Infantry in India from March 1937 to April 1938. He transferred to that regiment, instead of actually joining the Indian Army. During his year in India, Tatham-Warter took up two hobbies, tiger hunting and pig sticking. According to his obituary in The Daily Telegraph on 30 March 1993, he also took up polo, a sport he called ‘snobs’ hockey’.

So, Major Tatham-Warter did survive the war. Read more about this eccentric Englishman here.

What is not on my list of Top 10 War Movies (but maybe it should be?), but it is on my list of Funny British Shows is the series Dad’s Army, a BBC television sitcom about a group in the British Home Guard in the fictional seaside resort of Walmington-on-Sea during World War II. Dad’s Army, written by Jimmy Perry and David Croft, was broadcast between 1968 and 1977, all together nine seasons and 80 episodes. I still vividly remember how my dear father laughed watching this show when it was shown on the Swedish television in the beginning of the 1970s – and I with him.

In the first season, in black & white, episode four, “The Enemy within the Gates”, Captain Mainwaring is lecturing his men on enemy agents, which, according to Mainwaring are ‘being dropped all over the place in various disguises: nuns, priest, peasants, police… In fact, some of them might even be disguised as British Army officers.’ Mainwaring continues, ‘Then they come up to you and give you stupid instructions.’

Here Captain Mainwaring is interrupted by Private Frazer: ‘Well, how do you tell the difference?’

Captain Manwaring answers: ‘Use your head Frazer. You can always tell when a man is really British.’

Now, a man with a monocle and dressed in a British uniform, a captain, enters the room and asks in a very thick accent if he has come to the HQ of the 1st Platoon, B Company Home Guard. He says he is from HQ Area Command and would like to ask a few questions. Captain Mainwaring agrees. When the man with the thick accent starts asking what weapons they have, Sergeant Wilson interrupts and pulls Captain Mainwaring aside. Wilson says, ‘How do we know he’s not a German spy?’ Then adds, ‘He has a dueling scar.’ Mainwaring answers, ‘There were some pretty rum goings on at Oxford in the ‘20s, you know.’ But they decide to ‘grill’ the man in the uniform. While one man in the platoon is pointing a rifle with a bayonet towards the captain, Mainwaring digs out a pamphlet, the Geneva Convention, from his pocket. He flips through the pages and finds “Interrogation of enemy suspects”. Mainwaring starts with a pronunciation test of some simple English words. The captain with the thick accent fails miserably.

Mainwaring tries something else, ‘What would Mrs Mopp say to you?’

The captain answers, ‘She would say, “Can I do you now, sir.”’ For those viewers born outside of Britain, or in Britain but of a younger generation, ‘Mrs Mopp’ is not comprehensible. The character ‘Mrs Mopp’ was known from the popular BBC radio comedy programme, “It’s That Man Again”, or “ITMA”, broadcast between 1939 and 1949. One of Mrs Mopp’s catchphrases was ‘Can I do you now’. Another one was ‘TTFN’ – ‘Ta ta for now’.

Maybe the captain is not a German spy?

Then Lance Corporal Jones comes up with the ultimate question to verify if the man in the captain’s uniform is British or not: ‘Who won the Boat Race in 1935?’

The captain answers: ‘Cambridge’. Whereupon Jones says: ‘He’s right, you know.’ The captain adds: ‘It was raining at the time.’

Captain Mainwaring then asks the captain: ‘Look here. Who the hell are you?

Spy problem solved thanks to the Boat Race!

For those of you readers who would like to watch this early episode of Dad’s Army, here you are:

Of course, as a somewhat rowing historian, I had to check if Captain Winogrodzki was right about the weather. According to the Wikipedia entry about the 1935 Boat Race, Robert Bourne, the famous Oxford oarsman who acted as umpire for the race, started the competition ‘in strong and gusty wind, and rough water.’ But nowhere is it mentioned that it rained‽

I have found another minor connection between the Boat Race and Dad’s Army. In the 1970s, Dad’s Army was remade into a radio programme for BBC Radio 4. The radio versions, adapted from the original scripts from the TV show with most of the TV cast, had a radio announcer setting the scene at the beginning of every episode. The newsreader was John Snagge, well-known as the ‘Voice of the Boat Race’ between 1931 and 1980.