The Old Etonian (OE) and aesthete, Osbert Sitwell*, once described his former school as ‘The Gentleman Factory’. However, of more interest to Hear The Boat Sing readers is that this particular industrial unit is also a longtime manufacturer of oarsmen. Eton has a claim to have invented rowing as an amateur sport, and its boys were certainly boating in the 1790s, though the poet, Thomas Gray, indicates that they may have been on the river for much longer:

Say, Father Thames, for thou hast seen
Full many a sprightly Race
Disporting on thy Margent green
The Paths of Pleasure trace 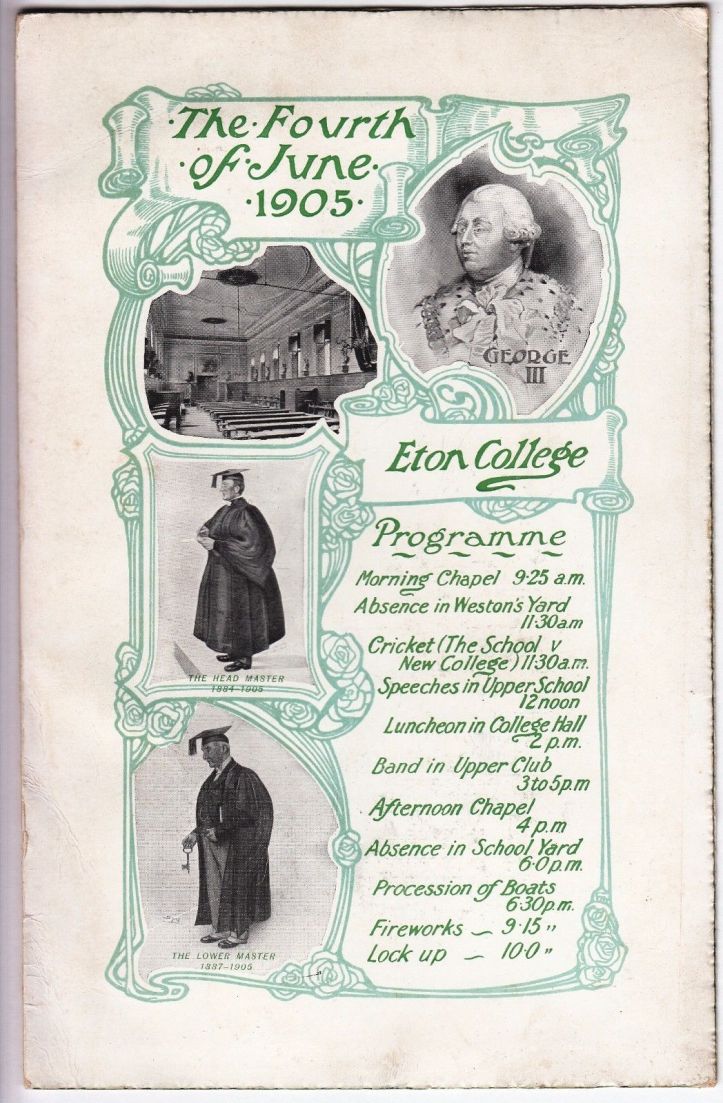 Eton College is the most famous fee-paying school in Britain and, possibly, the world. Sited just over the river from Windsor, it was established in 1440 and takes boys aged 13 to 18. No other school comes close to Eton as the nursery of the British establishment, certainly in the past, arguably still today. Further, few British institutions elicit such strong reactions from the general public as does Eton College, particularly in the last few years when its alumni appear to be everywhere, enjoying high-profile success in politics, the arts, entertainment, and business. However, many people have an outdated view of the place; an institution does not survive for nearly 600 years without knowing when change is required. In an interesting article in The Economist on Eton today, Christopher de Bellaigue, wrote that when he was there in the 1980s, the place was dominated by:

the descendants of Britain’s Edwardian upper and upper-middle classes – complacent, snobby and full of surnames recognisable from the inter-war diaries of Harold Nicolson.

Today, the most common surname at Eton is, allegedly, ‘Patel’ and de Bellaigue holds that neither bribery nor patrimony will gain an academically weak child admission. Old Etonians can no longer put their son’s name down for the school at birth, and all must pass the entrance exam (and somehow cover the annual £37,000 fees). The young headmaster has said that ‘Any self-respecting institution should be reflecting from time to time on things it does…. The best traditions should stand up to modern scrutiny’. Times have certainly changed since Noël Coward could have four OEs sing the lyrics:

We know how Caesar conquered Gaul
And how to whack a cricket ball;
Apart from this, our education lacks co-ordination.

Returning to more traditional HTBS territory, to things that appear not to change, there are two notable dates for Eton boys and their families during the year. There is St Andrew’s Day, for which the main attraction is the impenetrable ‘Wall Game’, and ‘The Fourth of June’ (which is rarely held on 4 June). This is the birthday of Eton’s greatest patron, King George III (1738-1820), and is the school’s equivalent of parents’ day or open day. The entertainments include a wide range of exhibitions, a promenade concert, a performance of speeches, a cricket match against Old Etonians, and the Procession of Boats. The Procession is a ‘row past’ by most of the school’s boat club in front of the parents and the teachers assembled in one of the school fields that rolls down to the Thames. It starts with the most senior boys’ boats and ends with those of the youngest. This does not sound particularly special – but there are several ‘Etonian twists’.

The wooden boats are clinker, fixed seat, and most have fixed pin (as opposed to swivel) rowlocks. The blades have ‘needle’ spoons and the leading boat is a ten-oar. All the rowers are dressed in the uniform of eighteenth-century midshipmen, with the cox dressed as an admiral or other senior naval officer of Nelson’s era. Most strikingly, the oarsmen wear straw boaters that have been extravagantly decorated with fresh flowers by their house matrons or ‘Dames’. The uniforms of the senior crews can be viewed on the website ‘Eton Colours’.

At a certain point in the row past, each boat in turn stops and the entire crew and the cox stand up. Those in boats with open fixed pin gates hold their oars erect. While Victorian eights are a little more stable than are modern racing boats, this is still a difficult thing to do. They then face Windsor Castle, remove their hats and cheer the Queen, the school, and the memory of George III, shaking the flowers from their boaters into the water. The crew then resume their seats and row away.

In 2009, the school magazine, The Chronicle, wrote on the origins of the Procession of Boats:

Eton’s water pageants began very informally: boys would amuse themselves rowing up and down on the river in fancy dress with flags adorning their boats. The first recorded pageant took place on the 4th June 1793. It was to celebrate the birthday of King George III; however, this was done without the permission of the Head Master or any beak (teacher). The peak of the procession’s illegality came when the Head Master at the time, Dr. Keate, had to decline a request from King William IV to watch the procession on the grounds that he ‘did not know there was such a thing’. In 1840, the school finally acknowledged rowing as a school sport and the Procession of Boats took a more legitimate place in the Eton calendar; by this time the structure of the event was largely set in place.

Eton’s own summary of the history of rowing at the school is on its website. Remarkably, the school authorities only ‘actively encouraged’ the sport from about 1860.

Rowing at Eton is divided into four groups.

Boys aged 13 and 14 only race in intra-school events, in single sculls and quads.

Those 15 and younger are called ‘Junior Colts’ and race in events held under the rules of British Rowing in the Junior 15 class.

Sixteen- and 17-year-olds are called ‘Colts’ and race in British Rowing events in J16, Novice and Intermediate 3 classes, if eligible.

This year, the first five crews in the Procession were from the ‘Upper Boats’.

The first boat to stand and salute the School, the Queen and the memory of George III was Monarch, the ten-oar. As usual, it consisted of four ex-officio rowers, the Captain of the School (the top scholarship boy), Captain of the Oppidans (the top academically most distinguished boy), the Ninth Man in the Monarch (responsible for running internal rowing races) and the Captain of Boats (who runs the First Eight). The remainder were ‘members of the Monarch’, senior boys who help administer internal rowing. The rules of Eton College Boat Club say that: ‘All instructions given by members of the Monarch must be followed without argument’.

Monarch and the two following boats, Victory and Prince of Wales, have swivel rowlocks with the normal closed gate so the boys cannot hold their oars up when they stand to salute. To compensate for having the advantage of their oars on the water, they all stand up together. The remaining seven boats have open ‘fixed pin’ gates. Thus the cox will stand, then 4 and 5 will hold their oars up and stand, followed by 3 and 6, then 2 and 7, and finally bow and stroke. Sitting down is done in reverse order.

After Monarch was Victory, the ‘First Eight’ or ‘First VIII’ (more commonly, it is just ‘The Eight’ or ‘The VIII’). These are Eton’s best and they will attempt to win school rowing’s ‘Triple Crown’, that is the Princess Elizabeth Challenge Cup at Henley Royal Regatta, the Queen Mother Cup for Championship Eights at the National Schools Regatta and first place in the Schools’ Head of the River Race. The remaining ‘Upper Boats’ were Prince of Wales (2nd VIII), Britannia (3rd VIII) and Thetis (4th VIII). Unusually, this year Victory and Prince of Wales followed Monarch in a ‘chevron’ formation.

Britannia, crewed by the Third Eight, were the first to suffer because of the very slack stream that was running that day. The less speed a boat has, the more difficult it is to balance, and with little or no stream, when rowing stops the craft will slow and become unstable very quickly. When the crew adds to the instability by standing up with their oars off the water, a ducking is possible.

The 4th VIII in Thetis was next – but they did not learn the lesson of Britannia’s mishap.

There then followed five ‘Lower Boats’. The J16 ‘Colts’ A, B and C crews passed in Hibernia, Alexandra and Defiance respectively.

Finally, the ‘Junior Colts’, the J15 ‘A’ and ‘B’ crews passed in Dreadnought and St George.

*For many years, Sitwell’s entry in Who’s Who contained the line ‘Education: During the holidays from Eton’.

My thanks to the Provost and Fellows of Eton College for their kind permission to photograph this event.