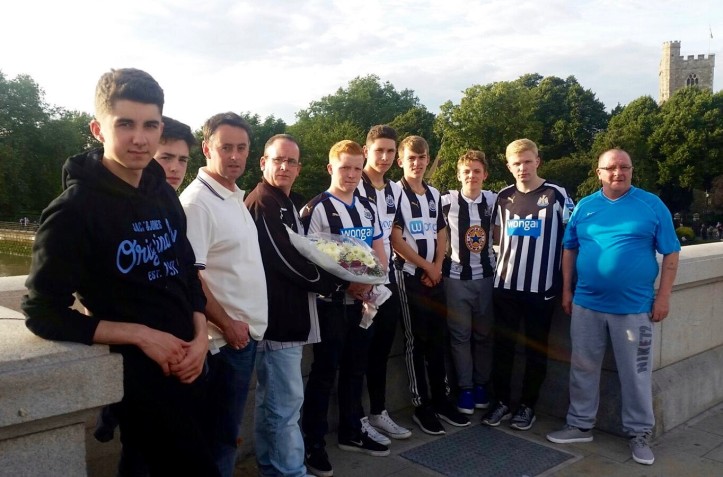 On 5 August, Newcastle United fans, who travelled to Fulham for the opening match of the new season, paid tribute to a Geordie rowing hero, Harry ‘Hadaway’ Clasper, who led teams of Tynesiders to win the Rowing Championship of the World on the Thames in the mid-1800s.

Fulham Football Club overlooks the River Thames at Putney, where Harry Clasper first led a team consisting of his brothers to their first world title in 1845. From the starting line beside the modern Putney Bridge, Clasper led a further seven teams to win the international accolade. 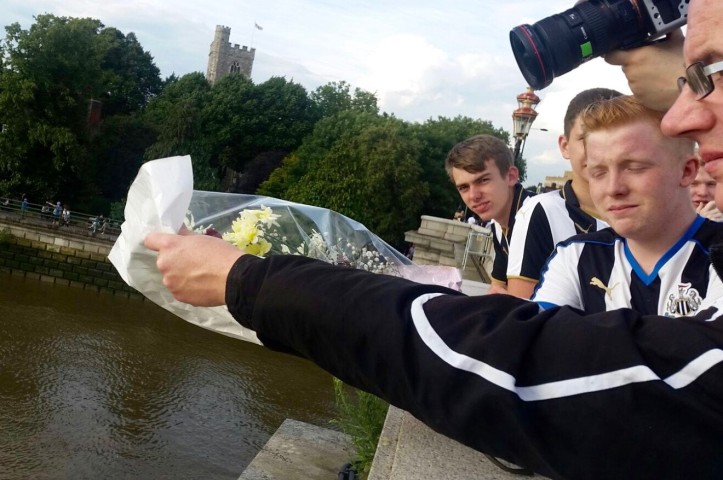 Back Page Travel Coach regulars threw a wreath onto the Thames in memory of the greatest sportsman ever to come out of the North East and the father of modern rowing, or ‘aquatics’, as it was termed in the Victorian era.

Newcastle fan Steve Cook, who initiated the tribute, explained: ‘Rowing was the sport of the working class before the advent of football and every river-based city had its champions. In excess of 100,000 people would cram the riverside and bridges to cheer on their heroes.’

Clasper was a hero not just in his native North East but nationally and internationally. In addition to coaching teams to the world titles, he trained and inspired future world champions and invented the rowing boats seen today in the Olympics and Oxbridge boat race.

Steve Cook added: ‘When Harry and his brothers first won the world title in 1845, they were victorious over the “unbeatable” Thames men. It caused a sensation nationally!’

The Blaydon Races, the song sung by Newcastle United fans, was written for Harry in 1862 and premiered at his testimonial at Balmbras in Newcastle’s famous Bigg Market. When he died in 1870, aged 58, more than 130,000 people crammed the streets of Newcastle and Gateshead to pay tribute.

Harry Clasper’s son, John Hawks Clasper, himself a top rower, also went on to build boats. His workshop, on the banks of the Thames in Putney, is now the Westminster School boathouse, which still bears his name, JH Clasper.

Editor’s note: Playwright Ed Waugh wrote the play Hadaway Harry about the life and times of professional oarsman and boatbuilder Harry Clasper. The play successfully toured the rivers Tyne and Wear last summer and will be shown at the 1,200-seat Newcastle Theatre Royal on 24 and 25 February 2017. For more details and information, please visit www.hadawayharry.co.uk

The match between Newcastle and Fulham ended: Fulham 1 – 0 Newcastle.