Collectaholics, the British TV show exploring the weird and wonderful world of some of Britain’s passionate and obsessive collectors was recently back on BBC2 for a second series and in a perverse sort of way it confirmed that most of us ‘collectors’ are normal. But as Mark Hill, one of the presenters, writes on his website “every collector, or anyone who knows one, will know what can happen when their obsession with their collection goes one step too far”.

This column will be about ‘rowing collectables’ – a few from my own collection and lots I would like to own.

According to their website, Durham Regatta has its origins in the annual procession of boats, organised by the Sheriff of County Durham and the Rt. Hon. William Lloyd Wharton, in June 1815 to celebrate the ‘famous victory’ at Waterloo. The event included the ‘firing of cannon and a substantial supper with a plentiful supply of strong ale for the Waterloo men’.

In this first edition of Crewcial Collectables, I will look at a couple of publications and a medalette from my own collection and some interesting prizes from the early Inter-Collegiate races within Durham University. 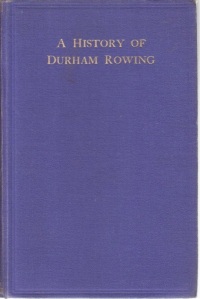 A History of Durham Rowing (1922) by A. A. (Angus Alexander) MacFarlane-Grieve (editor) gives a detailed account of rowing in Durham, Durham University and its colleges and includes substantial chapters on ‘Durham School Rowing’ by R. H. J. Poole and ‘The Durham Amateur Rowing Club’ by J. G. Burrell. A good copy will cost you between £80 and £100.

Some of the information about the collectables below comes from this publication (shown in italics). For those in possession of a copy I can fill in a gap in the record of the winners of The Challenge Pairs which is left blank in the records section.

In 2008, the River and Rowing Museum hosted an exhibition of Durham rowing memorabilia to celebrate One hundred & seventy five years of Durham University rowing. It is one of their few exhibitions to have been accompanied by a detailed catalogue (Exhibition Notes by Gerald Blake) which in my opinion is itself highly collectable. There may be a few copies still available priced at £10.

Both the above publications feature photographs of the famous Durham Regatta Medal presented between 1839 and c.1870 with the latter also featuring the Wharton Cup Medal featuring the shields of the Durham Amateur Rowing Club, Durham University and Durham School. You will find two nice photographs of an 1843 Durham Regatta medal won by Edward Clasper on the Friends of Rowing History website. 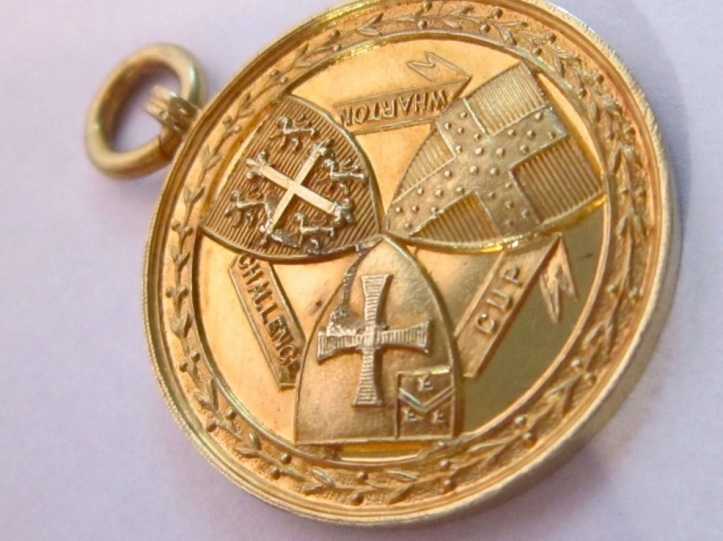 Recently, an 18ct gold Wharton Cup medal was offered for sale on eBay for £450. It had a hanging pin, unlike the medal featured in the RRM publication. Overpriced? I think so.

Compare this with the next two items that sold for a combined price of £400 in February 2014. Firstly they are much rarer and we know the name of the recipient. In addition, they add something to the rich history recorded by MacFarlane-Grieve.

The first item is the original rudder which was part of the prize of The Challenge Pairs which date from 1879 when a Challenge Pair of silver oars and rudder were presented by the Rev. V. K. Cooper, to be competed for annually in foy-pairs over the short course. In 1913 the Master of University College, the Rev. H Gee, D.D. and Mrs. Gee, presented a Challenge Cup for this race. In 1905 Dr. W. D. Lowe presented a silver rudder to replace the original one which had been lost. The trophies are not for inter-Collegiate competition, and pairs may be made up from more than one college.

Recorded in appendix IV of A History of Durham Rowing are the winners of The Challenge Pairs from 1879 to 1921 with the exception of the coxswain in 1881. The box for the rudder is embossed with the names of the winning coxswains for 1879 to 1883 with the 1881 winner recorded as H. Straker who was also victorious in 1880. The other names recorded on the box agree with the book and so perhaps a small but important contribution to the history of Durham rowing can be claimed by HTBS.

The second item is an 1884 medal for The Senior Inter-Collegiate Fours won by J. E. Brownbill of University College. The obverse has the crest of Durham University and the University motto – ‘Fundamenta Eius Super Montibus Sanctis’ which translates as ‘Her Foundations are set upon the Holy Hills’. The reverse is engraved with the names of the winning crew and the medal is complete with a swivel suspender and purple ribbon.

The history of this race commences with the foundation of D.U.B.C. in 1877, and it has been rowed annually ever since with the exception of the years 1885 and 1886, when it was abolished in favour of Trial Fours and during the war. After the Regatta quarrel it was revived as an event in the University Regatta, and the Senate of the University presented a Challenge Cup for annual competition in the year 1877.

The race is open to a Senior Four from each College and is rowed in fine fours over the long course.

It may appear that J. E. Brownbill is the culprit responsible for the original rudder going astray but there may be a perfectly good reason why it had to be replaced in 1905. The prizes may have been stolen or the quarrel referred to above may have seen the prizes left with the previous winners longer than customary and therefore forgotten. In any event, Brownbill was a successful coxswain who coxed the Durham University Boat Club’s first four in 1883 and 1884 albeit without success at the Durham Regatta.

From the eleventh to the nineteenth centuries, Durham was a County Palatine – an autonomous territory ruled by prince-bishops with the authority to raise their own armies and mint their own coins. (Rowing Blazers [2014] Jack Carlson)

One of the pleasures of collecting is the scope it gives to research your purchases and learn from them. As soon as I saw the Durham Regatta medalette (pictured above) for sale, I knew that it would be a challenge and having resolved to make a modest bid out of curiosity, I found that there was at least two others like-minded individuals but I’m glad to say that I was successful and can share this interesting find with HTBS readers and hope that someone can help identify what it was awarded for.

My initial thoughts were that it was a copper farthing, perhaps used by Durham Regatta in their beer tent or even as a reward to professional rowers to use in-and-around Durham. Of course, I have no evidence to support my theory; maybe I’ll never know but I live in hope.

This little enamelled lapel badge (26 mm) sold recently for £21. No details were given by the seller but the quality of the enamelling suggests it dates from the 1930s. I decided to go for the medalette and leave the badge to someone else.

If you are interested in Durham rowing you will find an online collection of A. A. Macfarlane Grieve’s photo album in the Durham University Library Special Collections Catalogue.