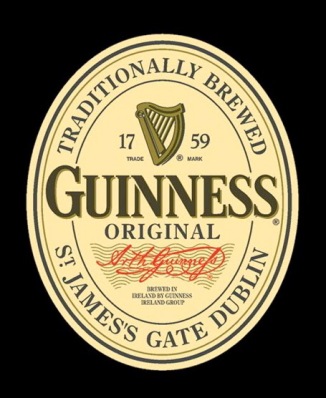 Today, 17 March, is St. Patrick’s Day and many people, Sons of Erin or not, will mark this solemn religious occasion by drinking industrial quantities of Irish stout, most famously that produced by the ‘Guinness’ company. In the past, HTBS has produced several items noting rowing connections to the ‘black beer’ produced by the Dublin brewing family.

Possibly due to the influence of Rupert, the company often included rowing in its frequently acclaimed advertising campaigns. In March 2010, Hélène Rémond shared some nice images she had found, and Greg Denieffe posted these in September 2013.

I recently came across another of the brewer’s advertisements with a rowing (or rather sculling) content, but this time in the form of a traditional celebrity endorsement rather than the clever graphics and slogans for which the company is most famous. On 6 July 1929 the ad posted below was run in the Illustrated London News. 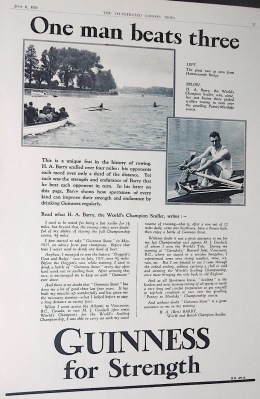 One man beats three. This is a unique feat in the history of rowing. H.A. Barry sculled over four miles: his opponents each raced only a third of the distance. Yet such was the strength and endurance of Barry that he beat each opponent in turn. In his letter on this page, Barry shows how sportsmen of every kind can improve their strength and endurance by drinking Guinness regularly.

In his endorsement Barry explains:

And there is no doubt that ‘Guinness Stout’ has done me a lot of good these last four years. It has built my muscles up wonderfully and has given me the necessary stamina – what I lacked before to stay a long distance at racing pace.

Advertising alcohol as a training aid for sportsmen may seem strange but this was a very different time. The 1912 Olympic sculling champion, Wally Kinnear, recommended Guinness and Champaign (‘Black Velvet’) as a remedy for over training. The old professionals would sometimes have a brandy and port on the start line as it ‘settled the stomach’. Much worse than associating alcohol with athletic success was the common idea of using sportsmen in cigarette advertising. ‘Camel’ cigarettes were especially famous for this – as this ad in Popular Mechanics of June 1935 shows.

Camels – ‘The mild cigarette the athletes smoke’. They include William Garfield ‘Bill’ Miller who came second in the coxless fours at the 1928 Olympics and second to Bobby Pearce in the single sculls in the 1932 Olympics. He was also U.S. Singles Champion, in 1930-1933. If he did actually smoke it is not surprising that a contemporary newspaper described him as ‘The husky Philadelphian’. The museum Mystic Seaport’s website describes another Bill Miller / Camel advertisement held by them though unfortunately there is no illustration. The handsome Miller was a natural choice for advertisers and, more harmlessly, he also endorsed Palmolive Shaving Cream.

Returning to Guinness, the advertisement does not make it absolutely clear but the ‘relay’ was a race from Putney to Mortlake with Barry sculling constantly over the whole distance but with a fresh opponent taking over from the previous challenger for every third of the course. Thus the race started conventionally but at Harrods a new sculler picked up the race with Barry while the original opposition to the Champion dropped out. There would be another change with a third sculler, perhaps around Chiswick Steps. I do not know if this stunt was done with the Guinness endorsement in mind or if it was something that the company picked up on after the event. However, thanks to the remarkable British Pathe website, we can see film of this possibly unique event. 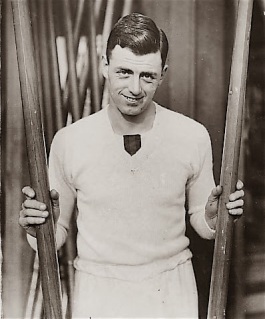 Herbert Arthur ‘Bert’ Barry (1902-1978) was the son of W.A. ‘Bill’ Barry (who won Doggetts in 1891 and was Professional Sculling Champion of England in 1898). Bert was a nephew of the great Ernest Barry and uncle of William L. ‘Bill’ Barry. Bert won Doggetts in 1925, and in 1927 he challenged the World Professional Sculling Champion, M.L. Goodsell, for his title. Strangely, the race took place in Vancouver, Canada, and not in Goodsell’s native Australia. The defending champion beat Barry convincingly. However, on a return match over the same course three months later, it was the Englishman who was victorious and he remained the unchallenged World Champion for nearly three years. Pathe has an especially good sound film of Bert sculling with his brother Lou around this period. 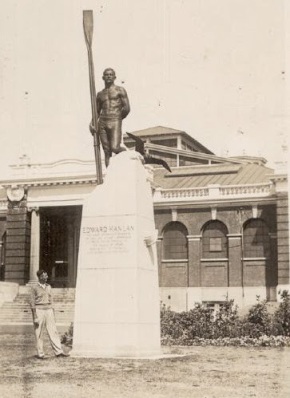 Bert with the statue of the great sculler Ned Hanlan in Toronto in 1934.

In May 1930, Bert lost the World title in his first defence to Ted Phelps, the first time in over fifty years that two Englishmen had contested for the World Sculling Championship. Bert also failed in the return match five months later. Perhaps he was not drinking enough Guinness?