Battles with the Blues

The Oxford and Cambridge Tideway fixture season is in full swing with the men’s and women’s Blue Boats taking on various challengers over the Thames Championship Course. Unfortunately, I have not been able to post coverage of these as soon as I would have wished (this is due to my employers expecting me to do what they pay me for, a sad state of affairs). I have previously reported on the races between Oxford and Molesey women on 1 March and now, a little late, can bring you coverage of the Cambridge and Thames women’s races of 2 March and, from the men, the Oxford v German Under-23s clash held on 8 March

2 March: Cambridge women passing the Mile Post, the monument to the great Cambridge coach, Steve Fairbairn. The Highland Cow in the left middle ground must be lost.

CUWBC and Thames RC did two races, both between the Boat Race start (above Putney Bridge) and Hammersmith Bridge, about forty per cent of the full course. The first piece was a walkover for Cambridge who went off strong, immediately went in front, were a length up before the end of Putney Embankment and continued to extend their lead to the finish.

Thames in an embarrassing position in front of their club house.

Passing Harrods and approaching the finish at Hammersmith Bridge. 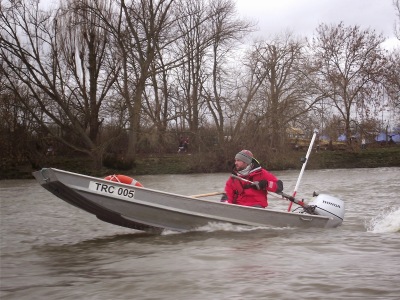 The second piece was a very different race. Both crews went off well and were initially level. By the time they approached the football ground, Cambridge were a couple of seats up but it was still anyone’s race. As the bend worked in favour of Thames (on Middlesex), they drew level and were for a brief time in the lead. Excitement was added when both boats moved together, which produced the threat of a clash, and by the water being very rough, it became a real test of boatmanship. Ultimately however, Cambridge showed their class and moved ahead and away from their opposition.

D-R-A-W! Cambridge on their first stroke. 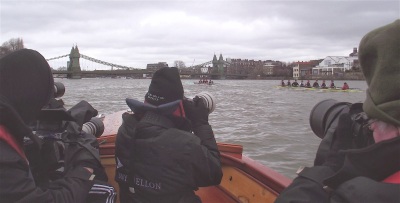 The 8 March saw a German Under-23 crew take on OUBC. While the Germans were big lads with international experience, it was a lot to ask them to take on a crew like Oxford, particularly with three Olympic medalists (Malcolm Howard, Constantine Louloudis and Storm Uru) on board. 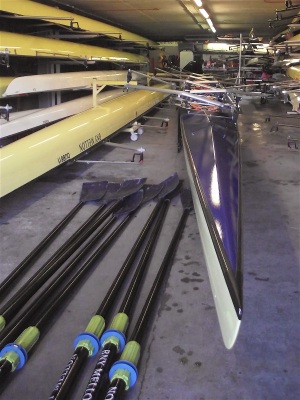 Oxford will be using the same boat that they used last year, the Empacher Acer, named after the late Acer Nethrcott.

The press launch was full but I was lucky enough to get a seat in the umpire’s launch. In the stern was, on the left, Peter McConnell, Boat Race Archivist and the man who writes the excellent race reports that appear on the Boat Race website and, on the right, Liz Box of the Boat Race Company. Among many other things, Liz Tweets the progress of the races for @theboatrace. She is well qualified to do this as she coxed Goldie in 2010 and CUBC in 2011.

The first piece was from the Boat Race start to Chiswick Steps. Underrating the visitors for most of the way, a composed Oxford led a rushed-looking German crew by half a length by the end of Putney Embankment. By Barn Elms the lead was over a length and this continued to grow in the approach to Hammersmith Bridge. The pictures tell the story.

Germany (left) and Oxford (right) at the end of Putney Embankment. Umpire Phelps was kept busy.

Both crews went wide at Hammersmith Bridge as they had just taken avoiding action around another boat.

Germany trails Oxford near the finish above Chiswick Eyot.

The second piece from below the Chiswick crossing to the Boat Race finish was more exciting, the Germans having a length start. Peter McConnell’s report on the Boat Race website captures it succinctly:

Oxford got off slightly quicker, pulling back half of the German advantage within the first 30 strokes. The Germans were tenacious on this occasion though, keeping the rate at 37 and with the advantage of the Surrey bend made a competitive race of it. However Oxford’s cohesion and power saw them creep back onto terms, man by man. At Barnes Bridge the lead was down to a canvas, then at the apex of the bend Oxford accelerated, going the long way round with a decisive move seeing them take a length out of the Germans in 20 strokes. Soon there was clear water with Oxford’s lead increasing with every stroke to 4 lengths at the finish.

The beginning of the second piece with Germany having a one-boat length start.

At the finish, a four-length lead to Oxford. Legendary Oxford coach Dan Topolski (right) looks on.

Oxford rehydrate by The Bandstand on Duke’s Meadows.

A full timetable of all of the fixtures for the Men and the Women is here. The Newton Women’s Boat Race takes place on 30 March and The BNY Mellon Boat Race on 6 April.