On 13 December, I posted a piece on HTBS entitled ‘Blue Movies’ in which I confidently identified a film of the Oxford-Cambridge Boat Race on the British Pathe website (titled by Pathe as ‘Boat Race 1910- 1920’) as that of the 1901 race, possibly making it the oldest Boat Race film available online. I wrote that the evidence for this was as follows:

The next day the following appeared in the ‘comments’ section:

The Pathe film shows Oxford winning on Surrey. It is therefore almost certainly the 1923 race, which Oxford won by 3/4 of a length. In both 1901 and 1913 Oxford were on Middlesex. If it’s the 1923 race Oxford’s number 3 was Andrew Irvine, who died on Everest the following year, and Oxford’s number 7 was Gully Nickalls, who twice won an Olympic silver medal and who became chairman of the Amateur Rowing Association.

It did not take me long to decide that the anonymous contributor was indeed correct. Before I show the evidence for this, I must confess to the poor research methods that led me to be twenty-two years out. I made the classic mistake of ceasing to look at the evidence was soon as I found ‘confirmation’ of the result that I wanted. From the finish distance, I noted the five years that it could have been – but failed to identify which crew was on which station for each of those races. Had I done this I would have found that Oxford won on Surrey in only one of those five years – 1923!

There is more subtle evidence that I missed or ignored. Looking at the shots that show the crowds around the boathouses on practice days (seven seconds in), men’s fashions are difficult to differentiate between 1901 and 1923, but women’s clothing styles are easier. Several women are wearing skirts or dresses several inches above the ankle. I am not an expert, but I think that this indicates that it was filmed after the 1914-1918 War.

Ironically, the final and irrefutable evidence that the film is of the 1923 ‘Battle of the Blues’ is provided by Pathe itself. The website has another film which Pathe clearly identify as the ‘Boat Race – Oxford v Cambridge 1923’. This is undoubtedly the ‘final edit’ while the material which is identified as ‘Boat Race 1910-1920’ is the film taken around or on 24 March 1923 but never used. Again, it was a failure on my part not to have searched www.britishpathe.com further.

The only thing that I can say in my defence is that I still think that my main piece of evidence, that of ‘matching’ some members of the 1901 crew with those in the film, still appears to hold up, even though I know it is wrong. I hope that I never have to give evidence in a Court of Law.

The Times newspaper headlined it “A Great Boat Race” and reported:

Oxford won the Boat Race on Saturday by three-quarters of a length in 20min. 54sec, after one of the most interesting contests of recent years. The anticipations of a close struggle were fully realized. The times and positions of the crews at the leading landmarks were as under: 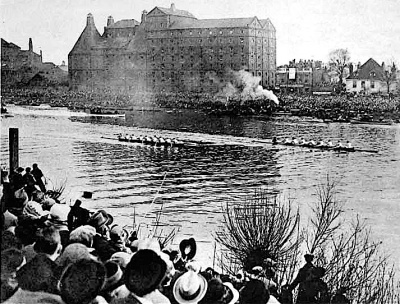 The finish from the Middlesex Bank.

Oxford won… by their superior racing qualities. They were rather better together than were their rivals, they rowed with more life and rhythm, and they were admirably stroked by W.P. Mellen. Cambridge rowed well, and all through the race were the more stylish crew to watch, but, as in the trials, they had a slow heavy middle period. They made the usual recovery at the finish, but Oxford had secured too great an advantage, and the well-sustained spurt made by the Cambridge crew failed to achieve victory. 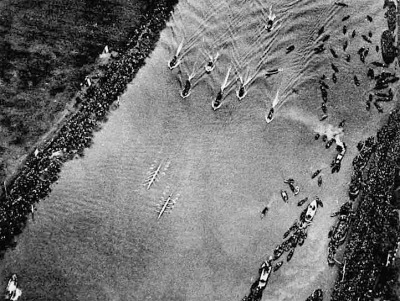 The finish from the air.

There are other newsreel films relating to the 1923 Boat Race online. This, filmed in the February, has nice slow motion shots of both crews in training and this, taken on race day, was filmed on the water, presumably from the press launch. Both were by the ‘Gaumont Graphic Newsreel’. 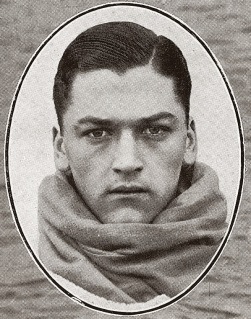 W.P. Mellen, Middlesex School, Concord, USA and Brasenose, Oxford stroke 1923 and 1924. ‘Mellen is undoubtedly he best stroke Oxford have had since R.C. Bourne. Although he is an American, he learned his rowing at Oxford, and his father stroked the Brasenose College eight in the Torpids’. (The Times, 26 March 1923).