Old postcards are a great source of information for rowing historians, especially if they have been posted and can be easily dated. The above postcard, which has be overprinted with ‘A Merry Christmas’ shows the boat house of the now defunct Drogheda Rowing Club, Drogheda, County Louth, Ireland (Est’d 1867) nestled beside the 12 stone-arches of the Boyne Viaduct, on the southern shore of the River Boyne. The club moved to their newly built premised in 1879 which according to Memories from the Boyne, The Story of Drogheda Rowing Club (2000) cost the princely sum of £212. The building was seventy-foot by forty-foot and contained a meeting room and a bathroom!

Unfortunately, this card has not been posted or written on but there are some clues as to its age. It has a divided back (dividing line down the centre to allow for both a message and the address to appear on the same side) which was introduced in January 1902. It also has the postal rate of ½d (half-penny) printed on the back which was the rate for internal postage until June 1918 when it was increased to 1d. Therefore it was printed for a Christmas between 1902 and 1917. I would guess that it is pre-WW1.

The Boyne Viaduct was built of iron between 1853 and 1855. It was refurbished in the 1930s, when new steel girders replacing the ironworks were constructed inside the original bridge before the iron structure was removed. 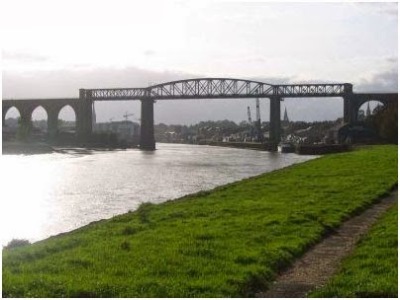 The Boyne Viaduct (refurbished in the 1930s) as it is today.

Drogheda Rowing Club was host of the ‘Boyne Regatta’ which traditional began the Irish rowing season. The IARU (Irish Amateur Rowing Union) was founded in 1899 and the first regatta held under their rules was held on the Boyne but the first recorded boat races on the Boyne were in 1862.

Here is a short clip showing the finish of a couple of races outside Drogheda Rowing Club in 1921: