1898 Wingfields: ‘a most extraordinary contest’ 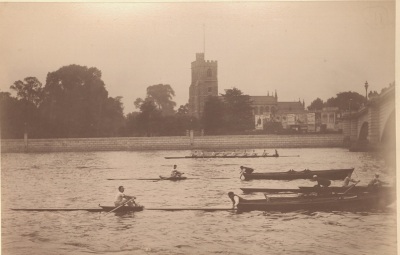 The start at the 1898 Wingfields. Closes to the camera is Harry Blackstaffe (Vesta RC) and in the background his opponent, Hunting Howell (Trinity Hall).

It is 25 July, 1898, and the location is the River Thames above Putney Bridge. Harry Blackstaffe (Vesta RC), the holder of the Wingfield Sculls, the amateur championship of the Thames and Great Britain, is getting ready to defend his title against B. Hunting Howell (Trinity Hall, Cambridge), who three days earlier had won the trial heat by beating C. H. R. Thorn of London RC. The day before the trial heat, 21 July, Blackstaffe had taken the London Cup at the Metropolitan Regatta. The previous year, Blackstaffe had easily won his first Wingfields in 23 minutes 58 seconds, four lengths in front of Howell, who was six lengths ahead of A. F. G. Everitt (London RC).

In the photograph on top, Blackstaffe is closest to the camera and in between the stake boats we can see the Vesta oarsman’s pilot boat, an eight, getting ready to follow their man and ‘pilot’ him the whole championship course from Putney to the finish line at Mortlake. In the background are Howell and his pilot boat. As usual the pilot boats are missing their bow men, instead the ‘pilots’ have taken that seat and will face forward to guide their scullers over the course.

The race ‘produced a most extraordinary contest’ The Times wrote in a report the day after the race, on 26 July. Blackstaffe went out quickly at the start and got a good lead, while Howell, or as The Times wrote, ‘the Cantab’, was not used to the quick tide at Putney Bridge. At Putney Reach, Blackstaffe was two boat lengths ahead, which at the Mile Post had become three and a half lengths. Passing the Hammersmith Bridge, the Londoner’s time was 8 minutes 53 seconds while Howell’s was 9 minutes. At Barnes Bridge, Blackstaffe was four lengths in front. To the on-lookers, including the umpire Gilbert Kennedy of Kingston RC (winner of the 1893 Wingfields) on the paddle steamer that followed the race, it looked like the sculler from Vesta RC had the championship title in the bag.

With half a mile to go, Blackstaffe began to look a little unsteady in his boat and had a slight problem with his steering, but Howell was still three lengths down. Suddenly, the Hall man began a tremendous spurt, rapidly gaining on Blackstaffe, who could not respond and was ‘quickly failing in strength’. All of a sudden, the Vesta man stopped rowing with 50 yards to go, totally exhausted. Howell passed him, got a couple of lengths lead, and stopped rowing, too, all pumped out. Nonetheless, the speed of his boat took him over the finish line in the new record time of 22 minutes 57 seconds. This was the second time a Trinity Hall man had won the Wingfields. The first one was James Bayford, who was the first winner of the Henry Wingfield’s Silver Sculls in 1830. James’s brother, Augustus Fredrick Bayford, who also rowed for the Hall, was in the first Cambridge crew in the Boat Race in 1829.