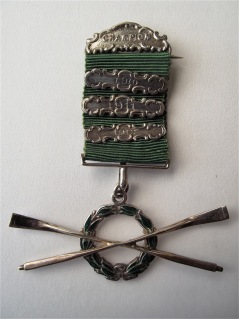 Tomorrow, Tuesday, 8 October 2013, will see the 173rd race for the Wingfield Sculls and also the 7th Women’s Wingfields. It is strange that an event that carries the grandiose titles of ‘The British Amateur Sculling Championship and Championship of the Thames’ should be so obscure, even within the sport of rowing and sculling.

The Wingfields started in 1830 when Henry Colsell Wingfield presented a pair of miniature silver sculls ‘to be held by the best’ as long as they agreed to race in single sculls on his birthday, 10 August, ‘for ever’. The course is the 4 ½ mile (6.8 km) ‘Thames Championship Course’ (most famously used by the Oxford–Cambridge Boat Race) from Putney to Mortlake complete with tide, bends, shallows, rough water, wind, driftwood and other river users. Patrick Kidd of The Times has written:

(The race is) above all… about athletes being taken out of their comfort zone. Baron Pierre de Coubertin, the founder of the modern Olympics, once said that rowing was the ideal sport because it was so hard for people to watch and thus worth doing purely for its own sake. In the Wingfield Sculls, that vision of glorious amateurism remains alive…

Top class rowers today are used to racing on plastic lakes where so many of the variables have been taken out and it is just a battle of limb and lung size. This is a different challenge.

Certainly the history of the race has numerous examples of winners who probably would not have beaten their opponents had they been on a straight, still water course. Racing on a ‘living river’ requires watermanship, something that cannot be learned on an ergo.

HTBS has previously covered the Wingfield Sculls in 2010, 2011 and 2012.  Two years ago, we produced a video record of this splendid contest:

Like other well run rowing contests such as Henley Royal Regatta and the Doggett’s Coat and Badge, the Wingfields is not a democratic organisation, it is organised by a committee of former winners. One of its few sources of income is from shares in the brewers Guinness, which were donated by Lord Iveagh (Rupert Guinness, Wingfields Champion in 1896). In recent years there has also been generous support from the Wingfield Family Society.

The 2012 Women’s Wingfields winner Beth Rodford sculling in the 2010 race. She is watched by the senior surviving Wingfields Champion, Doug Melvin, who won in 1955 and 1958.

Beth Rodford returns to defend her title against many of her team mates. She is challenged by both members of the double scull, Vicky Meyer-Laker and Frances Houghton. Francis trained out of the University of London for many years so will look to put her Thames Tideway experience to good use. Vicky Thornley was the single sculler at the Worlds and won the B final and wants to test her single sculling on the Tideway. Imogen Walsh’s season went from strength to strength last year after racing Beth in the Wingfields, culminating in fourth in the lightweight double at the Worlds. Lou Reeve is the only sweep rower […] and enters the Wingfields for the first time.

The men’s race is an hour later. Of these competitors Hall-Crags says:

This year [….] all the male single scullers from GB’s World Championship team (will) race. Jonny Walton has been doing much of his training with Alan (Campbell) as he was the spare sculler at the Worlds, presumably this has inspired him to challenge. Jamie Kirkwood was the lightweight single at the Worlds and has spent the last few years training on the Tideway at Imperial so feels he has the Tideway experience to challenge Alan. This is the first time Jamie and Jonny have challenged.

The umpire will be Sophie Hosking (Champion 2008 and 2009), who won lightweight double sculls at the London Olympics.

Throughout its long history, the standard of racing in the Wingfields has been very variable. This is probably beacuse in Britain sculling has traditionally been regarded as somehow inferior to sweep rowing. This year’s entry reflects the steady improvement that British sculling is currently undergoing. A list of former winners is here.

As a ’curtain raiser’ to this year’s races, following is a splendid newsreel film that I recently found online. It shows Richard Burnell beating Bertram Bushnell in the 1946 Wingfields. Of course, two years later ‘Bert and Dickie’ won a famous victory in the double sculls at the 1948 London Olympics. The bigger Burnell had previously beaten Bushnell earlier in 1946 in the Diamond Sculls at Henley but it is interesting to see that the highly competitive smaller man never gave up in this second encounter and sculled himself to the point of exhaustion. The final part of the film shows his limp body been lifted into the umpire’s launch at the finish. You could say that there were in fact two ‘Champions’ that day. View the newsreel here.