Tales of the Riverbank: Hammersmith 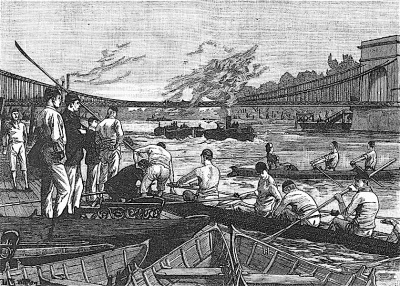 As someone who has boated from Hammersmith in West London for nearly thirty years, I was very interested in the recent HTBS posting, ‘Famous Photographer’s Rowing Pictures’ which showed photographs taken in 1957 of scullers on the Thames by Hammersmith Bridge and also rowers in Hammersmith’s ‘West End Boathouse’. I cannot, as yet, identify the ‘NPW Rowing Club’ to which the latter belonged – but I hope to soon. I agree that they cannot be from the amalgamated National Provincial Bank RC and the Westminster Bank RC as these two merged in 1968, were called the National Westminster Bank RC (NWBRC) and were never based at the West End Boathouse. A summery of the history of these two fine clubs is here.

Picture number 3 of 7 in the above post (which shows a single about to scull under Hammersmith Bridge) is most interesting for a non-rowing reason. On the other side of the bridge, behind the sculler’s head, appears to be some sort of strange craft. In fact it is a pumping station sitting on piles driven into the river bed. It was left over from the 1939 – 1945 War when it pumped river water to back up local fire hydrants used to fight fires resulting from the ‘Blitz’ bombing raids. Starting 7 September, 1940, London was bombed for fifty-seven consecutive nights. It was, in effect, a ‘9/11’ every night for two months. Although no longer connected by the time the photograph was taken, the remains of the water pipe that ran from the pumping station along the walkway of the bridge can still be seen (just below the lamp post on the left). Another legacy of the War was the fact that the bridge would have been painted grey at the time the picture was taken (and for many years after). It was a futile attempt to camouflage the bridge from enemy aircraft and it was only in the 1980s that the original green and gold paintwork was restored. Furnivall Sculling Club claim that their colours (‘myrtle and old gold’) come from the bridge’s first colour scheme.

More significant to the history of rowing are the two pictures of a crew relaxing by an open bay above a sign saying ‘BOATHOUSE’. This was the West End Boathouse, a place that in its long existence gave thousands of ordinary working men the opportunity to experience the joys of rowing. The building had two incarnations over perhaps 120 years – and a legacy still exists today.

Lower Mall in Hammersmith perhaps pictured in the 1860s.

The building was originally erected around the 1850s as ‘Biffin’s Metropolitan Boathouse’. Biffens were an already established firm of local boat builders that had been operating since the early 19th century. The picture above shows from right to left:

Two cottages which in 1869 were replaced by ‘Biffin’s Anchor Boathouse’ and which today is the Auriol Kensington Rowing Club.

The Rutland Pub, which also still exists. The top floor was damaged by bombing in 1941 and was removed in the 1950s.

Biffin’s Metropolitan Boathouse is to the left of the Rutland. Before the 1914 – 1918 War, it was extended to double its size, taking over the land on the left until then occupied by the house with the round window in its gable end. The result is shown in the picture below and in these Pathe Newsreels from 1919:

The history of the Biffin dynasty and their connection with boat building and both amateur and professional rowing is a long and involved story and is for another time. However, the advertisement from the British Rowing Almanac reproduced below shows the services that Biffin’s at its peak offered the rowing community. 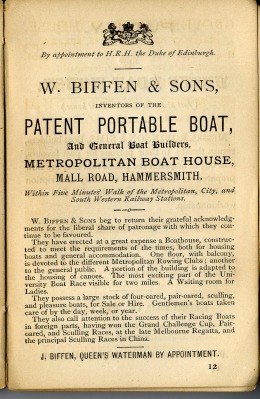 Whatever else they did, Biffin’s most important contribution to rowing was to rent changing rooms and to provide boat hire to clubs that could never own property or afford to buy many (or any) of their own craft. A rowing club could thus come into existence by a few dozen people paying a small subscription. As an example of this, Cygnet RC had been founded at Putney in 1890 for Post Office workers. By 1904 it needed more space and moved to Biffin’s where it had the use of a dressing room and six boats for £40 a year. The annual subscription was £1.40 so only a minimum of thirty members were needed to make the club viable. The advertisement below gives some idea of the clubs that operated out of the Biffin Boathouses.

Most of the clubs mentioned in the above advertisement (including the cheekily named ‘Leander Boat Club’) were tradesmen’s clubs or were (after 1890) affiliated to the National Amateur Rowing Association. This is because they did not pass the Amateur Rowing Association’s ‘manual labour clause’ i.e. that anyone who worked with their hands could not be considered an amateur. This list of some defunct London clubs shows even more groups that rowed out of Biffin’s and other boathouses.

It is generally accepted that it takes two or three generations to build up a family business and two or three generations to run it down. This was the case with Biffin’s. In 1897, the fourth generation put most of the Metropolitan Boathouse at 16 Lower Mall up for sale. The family retained some rooms at the rear of the building and also the Anchor Boathouse at 14 Lower Mall. The new owners were the West End Amateur Rowing Association (WEARA).

The WEARA had been formed in 1880 as an association of seven rowing clubs belonging to businesses based in the fashionable West End of London, many of which were department stores. In the days of ‘jobs for life’ and of some companies housing their unmarried workers in strictly run dormitories, it was common for employees (supported by the employers) to organise social and sporting activities with their workmates. The Association organised regattas amongst the constituent clubs and the latter grew in number – especially with the purchase of the Metropolitan Boathouse.

Looking toward the Rutland pub and Hammersmith Bridge from the WEARA boathouse. The man looking out of the window above the sign ‘ROWING’ is in fact in a boat bay. The whole bay opens to the floor and eights were manhandled out to ground level. Initially it required most members of the crew to be on the higher level but, as more of the boat came out, so pairs of people had to run down the stairs to the outside to take the weight of the increasingly protruding boat. This would be a difficult manoeuvre with a ‘light’ carvel built boat but this would also have to be done with heavy clinker built craft. It is in one of these open bays that the crew of 1957 is pictured.

In the early part of the 20th century it was necessary to double the size of the building and by 1909 there were fifteen affiliated clubs with over a 1000 members and 30 eights between them. The most famous alumnus of the WEARA was WD (Wally) Kinnear who won the single sculls at the 1912 Olympics. Workmates introduced him to rowing through Cavendish RC, the WEARA affiliated club for employees of Debenhams Department Store. Kinnear rowed and sculled for Cavendish from 1902 until 1905 when he left to join Kensington RC. It was only at an ARA affiliated club could he attempt his dream of winning the Diamond Sculls at Henley. 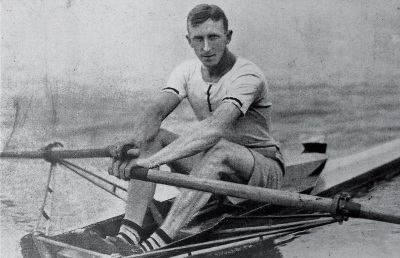 In the inter war period the WEARA thrived and in the 1920s a rowing tank was built as a memorial to the 125 members who died in the 1914 – 1918 War. Things were not so good following the 1939 – 1945 War and the building slowly fell into disrepair. In 1964 it was put up for sale but no buyer came forward and the structure deteriorated further. In 1970, Hammersmith Council declared it a ‘dangerous structure’ and it had to be evacuated. Some of the clubs in the WEARA found other homes but many disappeared forever. The one positive thing to come out of this sad situation was that when the building was demolished and replaced with flats in the early 1980s, the developers had to build a new boathouse as a condition of planning consent. The ‘New West End Boathouse’ is sited behind Furnivall Sculling Club and, although it is much smaller than the building it replaced, it today holds the eights and fours belonging to Auriol Kensington RC and to Furnivall SC.

Lower Mall, Hammersmith in 2004. From right to left: the Blue Anchor pub, Auriol Kensington RC, the Rutland pub, the flats that replaced the WEARA Boathouse, Furnivall Sculling Club (with the ‘V’ shaped roof). Unseen behind Furnivall is the New West End Boathouse, an undistinguished structure which, for those that know its origins, is a rather sad legacy of a rather remarkable past.