HTBS recently received an e-mail from Emile Farley of the Sons of the Thames Rowing Club with some interesting old photographs. Emile writes that a friend of his found these photographs that his father shot in the 1950s, probably in 1957, at Hammersmith. Emile sent them around to Sons of the Thames club members and was told by Colin Price, president of the club, that the boathouse in two of the pictures is the old West End Boathouse in Hammersmith where the Sons of Thames also used to be back then. Emile further writes,

I was curious about what club these men are from, as the crest on one shirt seems to say NPW RC (or perhaps PNW depending on how you read it). Colin suggested that it could be an amalgam of Westminster and National Provincial Bank’s rowing clubs, although these shots are from 1957, long before they merged in the late 1960s, so we’re not at all sure.

Here are the photographs: 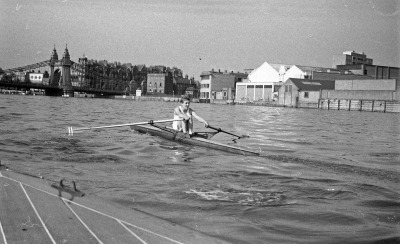 There is a real 1950s touch to these pictures, don’t you think? Another interesting thing with these ‘vintage’ photographs is the photographer who shot them: Alisdair Macdonald (1940-2007). The name might not ring a bell for many of you, but if you lived in London during the 1960s, 1970s, 1980s and on, you are very likely to have seen some of Macdonald’s photographs in the tabloids. How about the famous ‘balcony kiss’ between the newly-wed Prince Charles and Princess Diana at Buckingham Palace, Alisdair Macdonald – or Ali Mac, as he was also called at newspapers in Fleet Street – shot that. He also took pictures of that time’s celebrities, The Beatles and Michael Caine, for example, and sport pictures.

By 1960, he was employed by the Daily Mirror, and then he made a seven-year stint at the new Today newspaper, which was all in colour, and later worked for the Daily Mail. In 2004, Macdonald began as a freelance photographer. Read what the Mirror wrote about him just after he died, here, and a blog at Reuters, here.

Here is a blow-up of the crest on one of the oarsmen. To me it looks like NPW RC