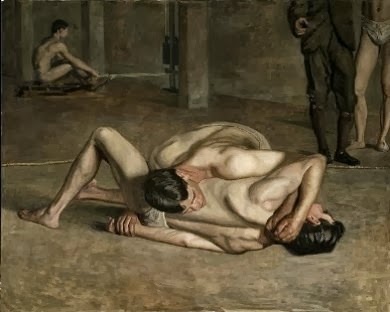 Rowing historian William Lanouette is now editing the manuscript for his forthcoming book, Racing to Oblivion, about the Biglin brothers, Thomas Eakins and the rise and ruin of professional rowing. Doing research for his book, Bill came across a painting with a remarkable “missing” link to the sport of rowing. Bill writes,

Thomas Eakins (1844-1916) made his many rowing images between 1871, with Max Schmitt in a Single Scull, and 1874, with Oarsmen on the Schuylkill depicting a four that included Schmitt. In between, he created many sketches and pictures of the professionals John and Barney Biglin in a pair, and of John in a single. But art historians have said that his last rowing picture was that of the four on the Schuylkill.

And yet, Eakins still had rowing on his mind after 1874. A preliminary sketch for his most famous portrait, The Gross Clinic (1875), showing Dr. Samuel D. Gross in an operating theatre at Philadelphia’s Jefferson Medical College, had been worked over an image of yet another rower.

At the Los Angeles County Museum of Art (LACMA) recently, I discovered an 1899 Eakins oil painting depicting wrestlers (see on top) clenched on a mat. But there in the background, filling fully a sixth of the canvas, was yet another rower! Not on water, but pulling a primitive erg that gained its resistance from ropes and pulleys hoisting suspended metal weights.

Although not set on water, this may be Eakins’s last rowing picture.

Bill Lanouette’s book Racing to Oblivion will be published by Harvard University Press in 2014.